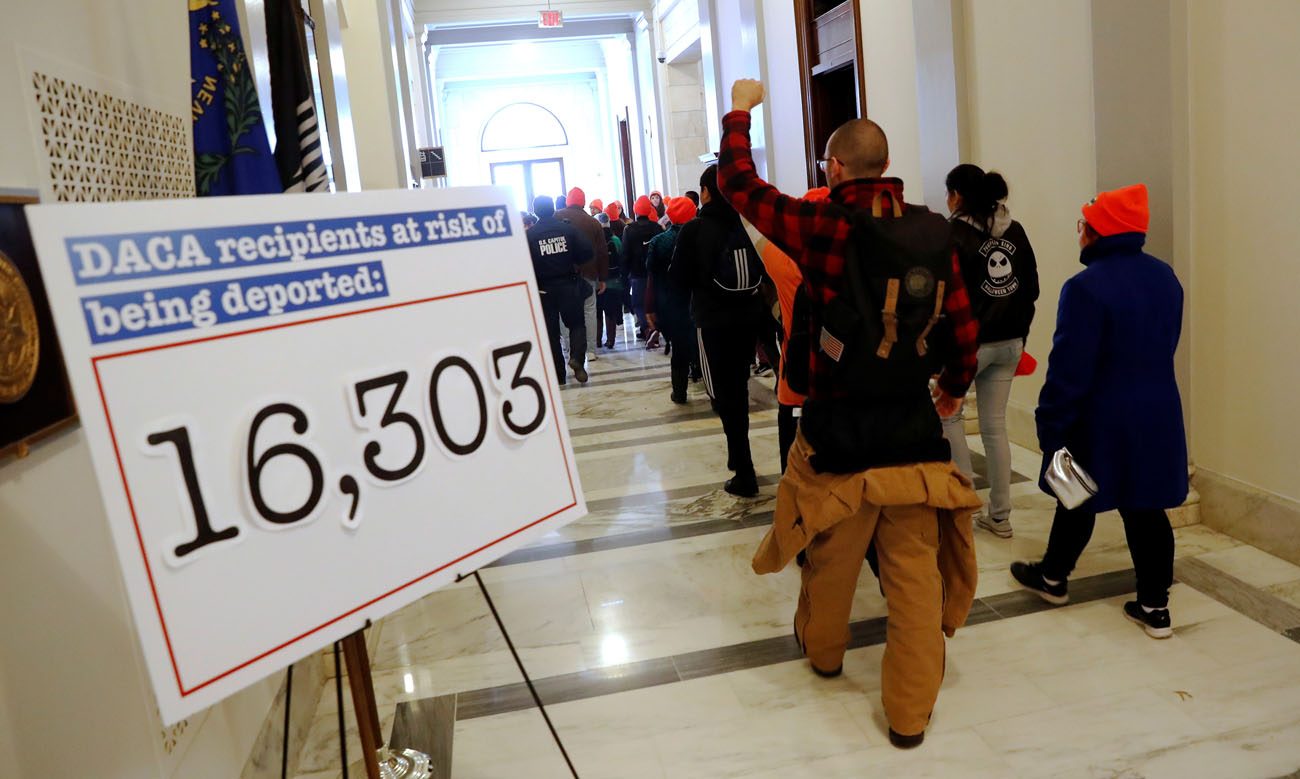 In this file photo, demonstrators calling for new protections for recipients of the Deferred Action for Childhood Arrivals program walk through a Senate office building on Capitol Hill in late January in Washington. (CNS photo/Jonathan Ernst, Reuters)

WASHINGTON (CNS) — After the Senate failed Feb. 15 to garner the 60 votes needed to move a bill forward to protect the “Dreamers,” officials of the U.S. Conference of Catholic Bishops announced a “National Catholic Call-In Day to Protect Dreamers” Feb. 26.

“We are deeply disappointed that the Senate was not able to come together in a bipartisan manner to secure legislative protection for the Dreamers,” the USCCB officials said in a joint statement Feb. 19.

“With the March 5th deadline looming, we ask once again that members of Congress show the leadership necessary to find a just and humane solution for these young people, who daily face mounting anxiety and uncertainty,” they said.

“We are also announcing a National Catholic Call-In Day to Protect Dreamers,” the three prelates said. They asked U.S. Catholics “to call their members of Congress next Monday, Feb. 26, to protect Dreamers from deportation, to provide them a path to citizenship, and to avoid any damage to existing protections for families and unaccompanied minors in the process.”

They added: “Our faith compels us to stand with the vulnerable, including our immigrant brothers and sisters. We have done so continually, but we must show our support and solidarity now in a special way. Now is the time for action.”

By day’s end Feb. 15, members of the U.S. Senate had rejected four immigration proposals, leaving it unclear how lawmakers will address overall immigration reform and keep the Deferred Action for Childhood Arrivals program in place.

Needing 60 votes for Senate passage, a bipartisan measure that included a path to citizenship for an estimated 1.8 million Dreamers — those eligible for DACA — and $25 billion for a border wall failed by six votes. The final vote was 54-45. A bill the Trump administration was supporting was defeated 39 to 60. Two other bills also failed.

The U.S. House was pressing on with its own bill, which by mid-day Feb. 16 was not yet up for a floor vote. Described as “hard line” by opponents, it includes keeping DACA in place, funding a border wall, ending the Diversity Immigrant Visa program, limiting family-based visas, requiring employers to verify job applicants’ immigration status and withholding federal grants from so-called “sanctuary” cities.

The U.S. House and Senate will be in recess for a week following the Presidents Day holiday.

The bishops and countless other immigration advocates have urged members of Congress to preserve DACA and protect the programs beneficiaries by passing the Development, Relief and Education for Alien Minors Act, or DREAM Act, which has long been proposed. The bill is what gives DACA recipients the “Dreamer” name.