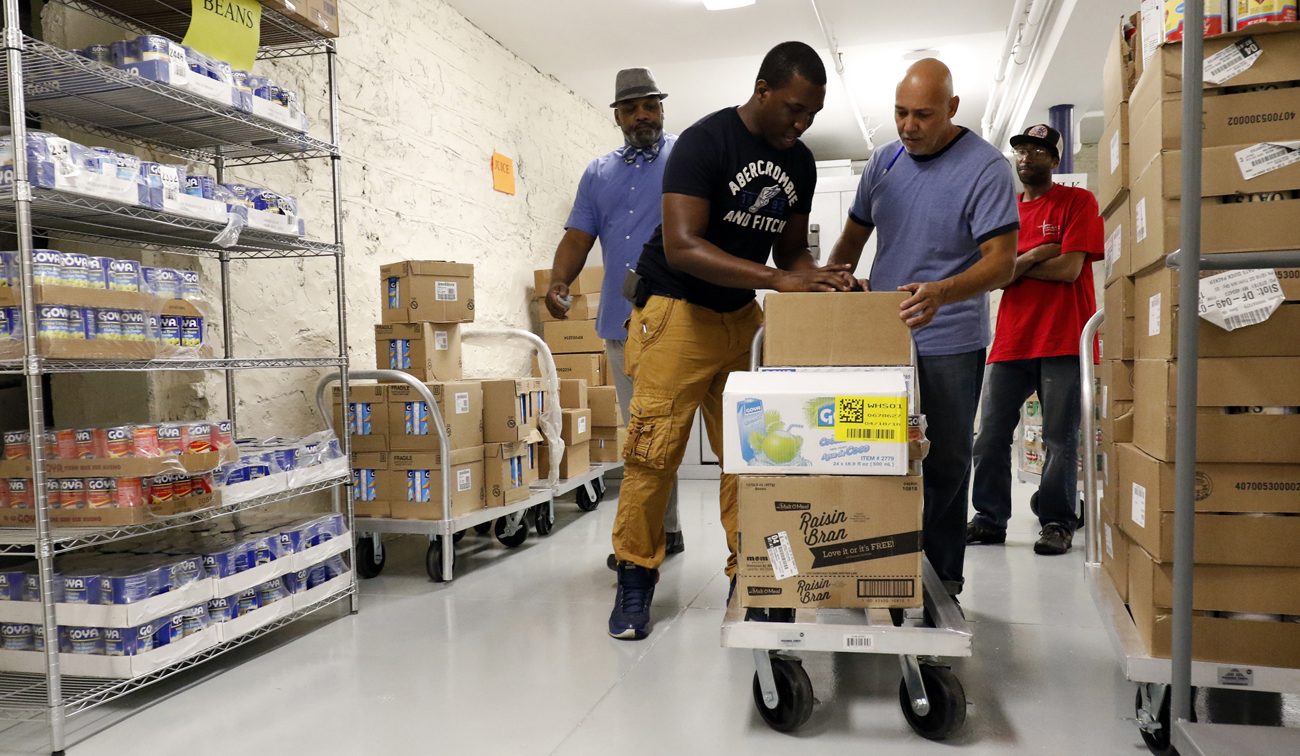 In this 2016 file photo, staff and volunteers organize food July 14 in the basement of Catholic Charities of the Archdiocese of New York's community center in the South Bronx. (CNS photo/Gregory A. Shemitz)

WASHINGTON (CNS) — Meeting needs has long been the signature of the Society of St. Vincent de Paul. Now, the Vincentians are looking to add their signature to eliminating the reasons behind those needs.

During a Feb. 3 lunch session for the society prior to the formal opening of the Catholic Social Ministry Gathering in Washington, Vincentians were told that a variation of what works best in meeting needs — the home visit — may have the best chance of succeeding at the public policy level.

“At the top is an in-person visit from constituents,” said Tom Dwyer, national chair of the Voice of the Poor Committee for St. Vincent de Paul, followed by contact from a constituent’s representative.

Dwyer said individualized emails to lawmakers rank third on the list, but “the kind we tend to rely on is the most ineffective method,” according to a chart he displayed during the session. “When we send out those emails” for Vincentians to deliver to their representatives, “we encourage people to modify it. Ninety-nine percent of those that are sent are exactly the same that’s in the template.”

Tom Mulloy, St. Vincent de Paul’s national director of poverty programs, spoke of the link between charity and justice. “Meeting a person in their home, where they feel their safest, that’s the charity. The justice is taking what we’ve learned,” he said. “What is it about our community that’s keeping more people from thriving?”

Mulloy added, “The Vincentian charism has this unique charism of the home visit. … We get to understand their deepest desires, their wants and needs.”

In his encyclical “Solicitudo Rei Socialis” (“On Social Concerns”), issued in 1988, “Pope St. John Paul II talks about what it means to be competent in talking about social and economic issues: ‘When we’re talking about the development of peoples, the church cannot be accused of speaking outside its competence,'” Mulloy added.

Jack Murphy, the Vincentians’ “systemic change leader,” referred to the rule of the society in helping to shape its advocacy work. “Striving to change attitudes Foster new attitudes of respect and empathy for the weak,” he said. “Not by hitting a button and writing to your congressperson That’s been our chief form of advocacy for the last 10 years. … That’s important work, but there’s more we could do. Raising empathy for the weak is something that’s critically important.”

Partnering with other organizations in advocacy also has its benefits, the Vincentians were told.

Meg Olson, grass-roots mobilization manager for the Catholic social justice lobby Network, spoke of working jointly with the society and Bread for the World, the Christian anti-hunger lobby, in a summertime effort in Arizona to prevent congressional repeal of the Affordable Care Act.

“Vincentians packed the press conference,” Olson said. She credited the show of strength in helping convince Sen. John McCain, R-Arizona, to announce his intent to vote against repeal, thus scuttling the bill.

“It’s so fascinating to situate ourselves and adapt to the framework of the Vincentian philosophy, Mougey said, “and address the root causes of poverty.”

PREVIOUS: How much will expansion of ‘529’ savings plans help Catholic education?