Good relations with lawmakers key to ‘vocation’ as lobbyist 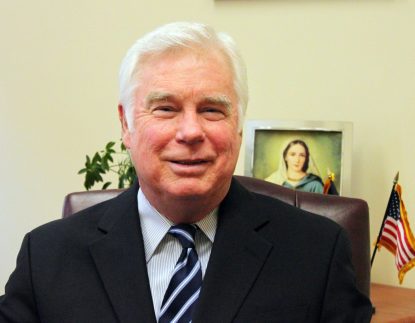 Robert J. O’Hara is retiring after 21 years as executive director of the Pennsylvania Catholic Conference.

When Dr. Robert J. (Bob) O’Hara Jr. retires from his position as executive director of the Harrisburg-based Pennsylvania Catholic Conference (PCC) in the coming months he will close out a distinguished 21-year run as leader of the Catholic Church in Pennsylvania’s official presence in the civic arena, especially in its dealings with state government.

“We represent the bishops and the church’s concerns in the public square and we try to bring Gospel values to the public square,” O’Hara said during an interview with CatholicPhilly.com. “I’m not a priest or a deacon. My expertise is dealing with legislation and with politicians and I have a little bit of administrative ability. The goals and directions come from the bishops. We try to actualize their direction.”

O’Hara came to the PCC in 1997 after the death of the founding executive director, Howard Fetterhoff, who served for 27 years. He was chosen from a pool of more than 100 applicants and he brought with him extensive experience as a lobbyist in Harrisburg and Washington.

O’Hara served in that role successfully for almost two decades with Pennsylvania Power and Light, rising to the position of director of state public affairs. He was looking for a change of pace, and the PCC represented an opportunity to combine work and faith.

Perhaps the thesis of his doctoral dissertation, a degree he earned at Lehigh University during his years at PP&L, gives a clue into his thinking. It was titled, “The Rising Cost of Energy and the Inability of the Poor to Pay.” The church, he said, “has a preferential option for the poor.”

Originally from Scranton, O’Hara is a graduate of Scranton Preparatory High School and earned his undergraduate degree in psychology with a minor in sociology from Villanova University. He continued on at West Chester University for his master’s in psychology in government.

In his working career O’Hara was employed in the Psychology Department of Graterford Prison and then was director of the Allentown Community Service Center for the State Bureau of Corrections.

He moved on to PP&L because “I enjoyed the administrative and political side of things more than the psychological community part,” he said.

In his personal life he and his wife Cynthia are the parents of two grown sons, Robert III and James, and members of St. Ann Parish, Emmaus.  He is a member of the Knights of Columbus in his parish and most years he comes down to the Philadelphia area for a stay at Malvern Retreat House.

Coming into the PCC, his many years as a lobbyist with PPL were helpful because whether it is lobbying for a corporation or representing the church, relationships mean a lot, and over the years he had already established good relations with many of the legislators in Harrisburg.

Maybe there was one difference. “This sounds more like a vocation,” he remarked to one bishop. “It is,” was the reply.

During his tenure at the PCC, one of the most successful programs has been endeavors to promote state assistance to nonpublic schools of which Catholic schools are a huge component. An initial program to provide direct assistance to the school was passed but did not survive challenge in the courts.

When the Educational Improvement Tax Credit program was originally passed in 2001 it was capped at $30 million, but by 2016 it stood at $175 million, including out-of-school-time programs.

Through EITC, corporations and businesses receive tax credits for donations to scholarship organizations and educational improvement organizations, which in turn make grants to the schools.

“This is not just a Republican issue, many Democrats support it also,” O’Hara said. “I didn’t have to convince people that Catholic schools are good schools. People know this and they are not a difficult product to sell.”

Other issues of concern to the PCC are social concerns, the health field, pro-life issues and the ability of religious organizations to operate according to their beliefs without government interference.

Some of the issues the PPC supports really have come from other sources, including a current push to ban abortions performed because of Down syndrome.

As he leaves the PCC O’Hara is confident the work will go on. “Everything we did was done by the team and by the team that went before us,” he said.

As for the future, “I won’t be sitting around watching TV,” he said. “I’ll find some way perhaps to help my diocese and my parish. It won’t be full-time. I want to spend more time with my wife, my sons, my daughters-in-law and my grandchildren. And of course golf.”