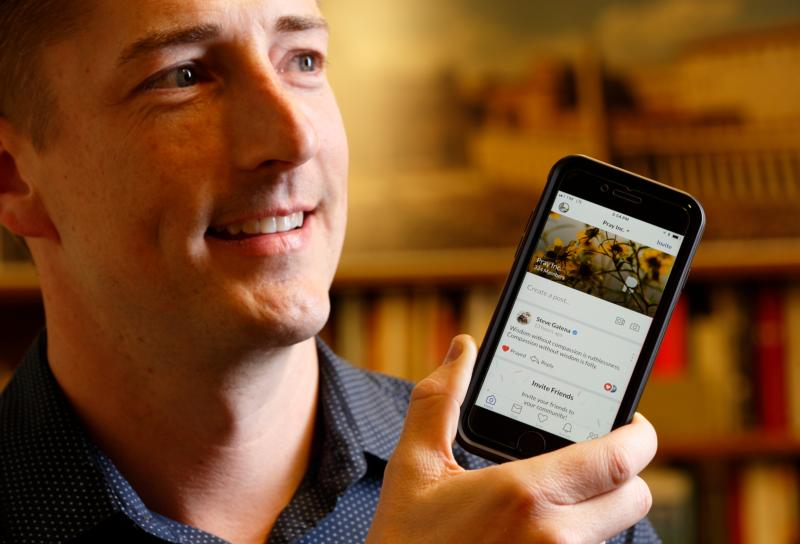 Michael Lynn, co-founder of the newly developed app, Pray.com, holds a phone with the app during an interview in Rome April 23. The app provides a way for faith groups to share prayer requests, announcements and service opportunities in an environment free from advertising. (CNS photo/Paul Haring)

VATICAN CITY (CNS) — Convinced that faith communities would want to share prayer requests, announcements and service opportunities without going to multiple platforms and without being awash in advertising, a group of friends created an app just for that.

With $2 million in seed money, Pray.com was beta tested with 100 churches in 2016. Today, 6,000 faith communities and thousands of other groups use the app to host their members’ need for prayer and offers of support, as well as to recruit volunteers for local service projects and to collect donations, said two of the co-founders.

The faith-social app Pray 2.0 is designed specifically not to “gamify” the experience of the parishes, mosques, synagogues, churches and temples that use it, Matthew Potter, one of the app’s co-founders, told Catholic News Service April 23.

“What big social media does is gamified to get more eyes on more ads,” he said. People become obsessed, consciously or not, with attracting followers and likes, which in turn gives the advertising a wider market.

The communities that set up one of the closed groups on Pray.com and the community members who join those groups pay nothing. Pray.com does not accept advertising but earns money by taking a small percentage of the donations it facilitates for the groups.

Potter and co-founder Michael Lynn were at the Vatican in late April where Pray.com was used as the community platform of choice for Humanity 2.0, a gathering of financiers, philanthropists, artists, tech experts, physicians, politicians and religious leaders who came together to discuss ways to work together to make a positive impact on the world.

As a first step, they decided to raise $100,000 to give to Pope Francis. The donations and pledges are being made through the app.

But participants, who were not part of a community before the April 19 event at the Vatican, also used the app to pray for safe travel, to comment positively on each other’s presentations and to share news once they were back home.

Pray.com is designed for that third part, he said. “It is a place where people engage in prayer and prayer requests, create community, support one another and support their local community, which can be their church, their temple or mosque.”