Long road to priesthood began in Vietnam, will end in Philly 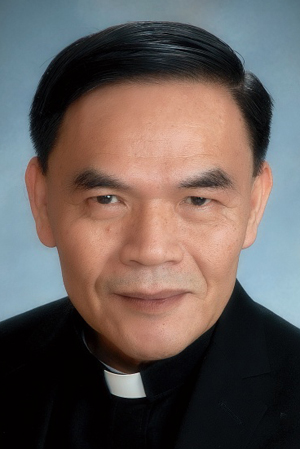 First in a series of profiles on the six men to be ordained priests for the Archdiocese of Philadelphia on May 19. See the series in our Profile section.

For Quy K. Pham, a transitional deacon who will be ordained a priest by Archbishop Charles J. Chaput at the Cathedral Basilica of SS. Peter and Paul on May 19, it will be the end of a very long journey both in distance and time. Now 59, he first entered the seminary 46 years ago and 8,900 miles away in My Tho, the capital of Tieng Gang Province in the Mekong Delta region of South Vietnam.

Entering a minor seminary in 1971 at age 13 wasn’t really his idea, the decision was made by his parents — his dad, Can Pham and his mom, Hoi Vu. The eldest of nine and a dutiful son, he did as he was told. Once in the seminary, he really took to the idea of becoming a priest, but circumstances dictated otherwise.

The Vietnam War was still raging, and four years later after the fall of Saigon, the seminary was closed in 1975 by the communists, and Quy had to return home. He continued his studies at a local high school for two years, and then the seminary was briefly reopened.

“It had 300 seminarians when I left, we were on 40 when I went back,” he remembers. The seminary didn’t remain open for long before the authorities closed it again. He continued his studies clandestinely until the authorities put a stop to that also.

Finally in 1983, he made the decision that his only chance for ordination was to escape Vietnam.

“I was a boat person,” Quy said. “I was on a small boat one of 22 people. We were at sea for five days before an American plane spotted us, and put out an alert. We were picked up by an oil tanker, the Aroma, and taken to Singapore.”

That was a beginning. Afterwards he was sent to a relocation camp in the Philippines and ultimately, eight months after leaving Vietnam, he arrived in the U.S. His first stop was in Alexandria, Virginia, where he stayed for a time at a rectory where there was already a Vietnamese priest. He applied at a seminary in that area but was not accepted.

His next stop was here in Philadelphia with the Vincentians in Germantown. The order did accept him on a trial basis, but after a year he was advised he needed more experience in English and inculturation skills in America before he could continue.

He took a job in the Narberth area cleaning houses but still trying to find a seminary, as far away as Boston. He could not find one that would accept him.

Thoroughly discouraged, not at the idea of the priesthood but by the acceptance process, he stopped looking and continued his education at the Philadelphia College of Textiles and Science (now Thomas Jefferson University). After obtaining a bachelor’s degree and a master’s in computer science, Quy began a career in computer programming at Pennsylvania Hospital followed by the City of Philadelphia.

Over time he sponsored his parents, brothers, sisters, nieces and nephews to this country. Ultimately he married Donna Marie Lodise, whom he’d met through church, and they settled in Immaculate Heart of Mary Parish in Philadelphia’s Roxborough section. It was a good marriage although they had no children.

After 13 happy years, Donna developed cancer, and after a year that he nursed her through her suffering, she died in 2014. Through it all he remained a devout Catholic and daily mass-goer.

Over the years, Quy had been bolstered in his faith through devotion to St. Therese of Lisieux, who also had to overcome obstacles in pursuing her vocation. Quy cited the prayers of St. Therese and St. Francis as helpful in this time of frustration and sorrow.

Also helpful and encouraging to him was Father Harry McCreedy, a longtime family friend of Donna’s with whom they had made several pilgrimages to international shrines.

Meanwhile, Quy had been considering the permanent diaconate, especially because he had most of his theological studies behind him. Donna encouraged him, and knowing she was dying, urged him to once more follow his original dream and seek priestly ordination. At first he contacted the Sacred Heart Fathers in Wisconsin and they suggested he really should try Philadelphia first.

Quy contacted Father Stephen DeLacy, the vocations director for the archdiocese, who in turn obtained the consent and blessing of Archbishop Charles Chaput. That was three years ago.

Now Quy Pham’s long journey to the priesthood is coming to completion.

NEXT: For Penn grad soon to be priest, peace comes with achievement