New abbot leads ‘ministers of peace and reconciliation’ for church 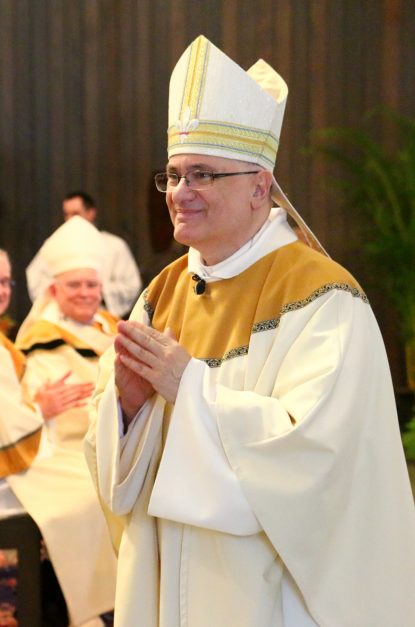 Abbot Domenic Rossi, the new abbot of the Norbertine religious community at Daylesford Abbey, Paoli, received a blessing by Archbishop Chaput April 14 among the Norbertines and the faithful. (Photo by Sarah Webb)

(See a photo gallery of the blessing ceremony.)

Actually Abbot Rossi officially took office on Jan. 23, the date of his election by his fellow Norbertines in the Daylesford canonry for a nine-year term.

To use their official name, the Canons Regular of Premontre were founded in France in 1120 by St. Norbert of Xanten with a rule based on that of St. Augustine.

They first came to America by way of Belgium when St. Norbert Abbey in De Pere, Wisconsin was established. Daylesford is an offshoot of that Abbey and takes its name from the community of its initial location in Daylesford, not far from Paoli, Chester County.

Abbot Rossi, 69, has a long history with the Norbertines. The oldest of the three sons of Vincent and Frances Rossi, he was raised in St. Monica Parish, South Philadelphia and attended St. Monica School and Bishop Neumann (now SS. John Neumann and Maria Goretti) High School, which at that time had a Norbertine faculty.

“I really appreciated the familial atmosphere among the Norbertines,” Abbot Rossi recalls. “They had a good community experience, and it was very peaceful here. I thought I should give it a try, maybe give it a year to see if it was something that suited me.”

That was in 1966 and in the end, both he and his friend entered and although his friend did not stay until ordination, Abbot Rossi now leads that same community.

Canons Regular such as the Norbertines are attached to a particular abbey for life, but often work and if necessary live away from the abbey. In Abbot Rossi’s case after his formation and 1974 ordination he remained at Daylesford, where among other ministries he led a men’s group, the Body of Christ Prayer Group.

It was in the late 1970s as group of a dozen or so men were meeting in the chapel, opening their Bibles at random for guidance. Three, including Father Rossi, happened on Isaiah 58:7 which calls true fasting “Sharing your bread with the hungry, sheltering the oppressed and the homeless, clothing the naked when you see them.”

Through this experience Bethesda Project was founded in Philadelphia, first to provide services to homeless women and later through My Brother’s House shelter for men also. Father Rossi led this program until 1991 when he was transferred to Albuquerque, New Mexico although still attached to Daylesford. 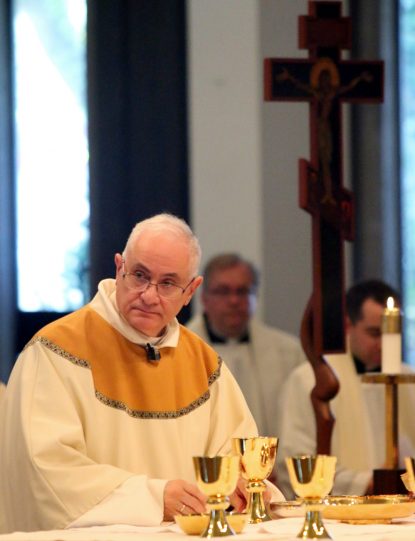 “That was at Holy Rosary Parish, which had a very large Hispanic working-class population, not dissimilar from the working-class Italian parish I came from,” Abbot Rossi said. “I think we connected pretty well. I learned enough Spanish so I could celebrate Mass and hear confessions, and we had deacons who were fluent in Spanish.”

In 1997 he was recalled to Daylesford to take up the pastorship of nearby St. Norbert Parish, Paoli. There he remained for more than 13 years. He also returned to Bethesda Project as executive director.

His most recent assignment prior to his election as abbot was as pastor of St. Gabriel Parish in South Philadelphia, not far from his parish of birth, and he still remains a board member of Bethesda.

(Norbertine Father Carl Braschoss has been named the new pastor of St. Gabriel’s.)

As Abbot of Daylesford Abbey, Abbot Rossi now leads a community of 29 men although not all actually live at the abbey. There are also three members of other canonries in residence, two from the Czech Republic and one from India. One member of the canonry is teaching at St. Norbert College in Wisconsin.

“We go forth from the abbey to serve at various parishes, and some of our men give talks of various kinds,” Abbot Rossi said. “Really what we are about is to strengthen and heal this unity we have in Christ. We live in a polarized world and even the church has been somewhat affected by the polarization. What we are about is to try to heal any divisions and restore and strengthen that communion and see Christ as first and foremost in one another.

In his own life, “I’ve grown to understand and appreciate the charism of our community more and more, and to desire to be a minister more of peace and reconciliation,” Abbot Rossi said. “I would like that to be my focus as abbot.

“I believe that God is calling me and our community to be ministers of reconciliation in the tradition of St. Norbert.”

NEXT: Through a youth group and a magazine, man hears God’s call