Through a youth group and a magazine, man hears God’s call 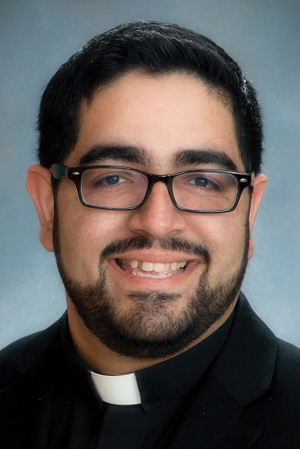 Manuel Flores was baptized shortly after his birth in Puerto Rico in 1989, but he did not receive his sacraments of first Communion and confirmation until age 18 at St. Hugh of Cluny Parish in North Philadelphia in 2007.

Now a transitional deacon, he will be ordained to the priesthood by Archbishop Charles Chaput on May 19.

His faith journey, really against all odds, is fascinating. He came to the mainland and Philadelphia with his mother, Yeidy Rodriguez, at age 5, and raised by her and his stepfather Antonio Cruz. He attended local public schools including Jules Mastbaum Vocational Technical High School, where along with his other studies he was trained in welding.

His was not a church-going family, at least not until he was approaching his upper high school years when his mother started attending St. Hugh’s, and talked him into coming along.

“I didn’t want to go at first,” he admits. But go he did, and it opened up a whole new world for him. He joined a teen PREP program conducted by parish DRE Nancy Sanchez, who is now Field Coordinator for Hispanic Outreach of the Office for Catholic Education, and Manuel grew in his relationship with the Lord.

It was she who first sensed he might have a religious vocation, but it would have to wait until he discovered it himself. He did think about it but initially pushed the idea away.

After high school graduation Manuel took an entry-level job with a school bus service, assisting children with disabilities on their journey to and from school. He also got called up for jury duty, and although he wasn’t called to serve on a trial he happened to pick up an evangelical religious magazine to pass the time.

Reading it later at home one passage hit him like a bolt of lightning. It was Matthew 9:27: “The harvest is plentiful but the workers are few.” He would be a worker for the Lord, he decided.

That was in the spring of 2009. He talked to Sanchez about it, and she went to bat for him. Father Chris Rogers, who was the archdiocesan vocations director, and other people, cautioned Manuel this was not an ordinary vocation; allowances would have to be made but they would be well worth it.

Things happened rather quickly after that, even if it took him well out of his comfort zone. Although his schooling gave him excellent English skills he lived in a thoroughly Hispanic neighborhood and culture with Spanish as the language spoken at home.

Such little things as taking a physical exam after not having been to a doctor for many years, or even taking the commuter train alone out to Overbrook and St. Charles Borromeo Seminary, were daunting for a kid who rarely left his own turf before.

Somehow he got through the meeting with the seminary’s Admissions Board as well as faculty members, and even the in-depth psychological screening in Downingtown, and was accepted at St. Charles for the fall term of 2009.

In the beginning it definitely was a learning curve. A vo-tech high school experience is not the best preparation for a seminary program that includes a bachelor’s degree in philosophy followed by a master’s in theology.

“It was difficult,” Manuel recalls. “In the first couple of years I struggled and I was afraid I would be asked to leave.”

With that said, he got along with his classmates very well, and “we were all in this together,” he said.

He was surprised seminary life wasn’t as strict as he’d expected. “Some of the students were role models for me and faculty members as well,” he said. “Especially Father Robert Pesarchick who was my advisor.”

He was happy that sports activities are encouraged at St. Charles because he could play basketball, which he always loved, and was introduced to soccer, something new for him.

His deacon assignment was at Sacred Heart Parish in Oxford, which although it is not a Hispanic parish there is a Spanish Mass every Sunday and he was able to participate in Hispanic ministry.

Now he will be ordained a priest, and as Father Manuel Flores his first Mass will be celebrated at St. Hugh Church. It is no longer a parish but a chapel of nearby St. Veronica Parish.

But rest assured on May 20 it will be filled with the many people who accompanied him and encouraged him on his journey to priesthood.

NEXT: Drawn by music, immersed in parish life, he’s ready for ordination