I’ve always loved the movies. As a child, I dreamed of directing films. Obviously that didn’t work out. Nonetheless, I’ve seen hundreds of them. Many, like the current release “A Quiet Place,” have been wonderful: an unexpected mix of great cast and directing, terrific science fiction scares, and the powerful beauty of family love. Others, not so much.

But one of the most striking films I remember is “Wings of Desire” (1987), the story of an angel in Berlin who chooses to become mortal to experience human love.

“Wings” was directed and co-written by the German filmmaker Wim Wenders, a master of film drama and an accomplished documentarian. Much of Wenders’ work is marked by a Christian-inspired spirituality; he and his wife are candid about their belief in God; and in past interviews he’s noted that his life and work have been “profoundly formed by growing up in a Catholic family.”

Impressed by the encyclical Laudato Sì on the environment, and encouraged by a priest friend, Wenders embarked on a documentary of Pope Francis’ papal ministry and thought. The result – “A Man of His Word” – will be in theaters on May 18 from Focus Features.

At this point in his career, Wenders is at the top of his craft, and it shows in the beauty and excellence of this production. He focuses compellingly on the Pope’s concern for the environment, the poor, and immigrants. He also captures the Pope’s vigorous commitment to marriage, the family, and the complementarity of men and women, a fact we witnessed firsthand here in Philadelphia during the World Meeting of Families 2015.

The most absorbing moments in the film, not surprisingly, are spent with Francis himself visiting immigrants, the poor, the sick, the Shoah memorial Yad Vashem in Israel, and the Western Wall in Jerusalem. Wenders weaves an ongoing, intimate, one-on-one interview with the Pope throughout the film. It’s a hugely effective technique; one has a sense that Francis is looking directly at, speaking directly to, the individual viewer. 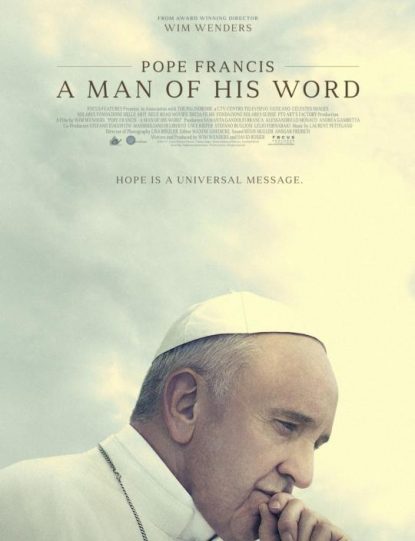 But the technique only works because Francis himself is an appealing presence who does well in exactly such an environment. The Pope expresses himself simply and persuasively on a wide range of issues: the dignity of work; the importance of poverty both as a call to service and a discipline for authentic Christian life; the need to make time for rest and worship; the negative impact of macho and feminist ideologies; and the urgency for all of us to be “apostles of the ear,” i.e., persons who learn to listen well.

The documentary, while strong, would have been even stronger with tighter editing. It’s too long by 30 minutes. Its portrait of Francis of Assisi, while useful to the narrative, is selective and only lightly acquainted with the real saint, who was a complex and formidable man concerned for Creation as a reflection of God’s glory, not as a limited natural resource.

Wenders also misses (or avoids) the opportunity to present the holistic Catholic vision of human dignity that Francis serves, i.e., the reason why Catholic concerns for the unborn child, the disabled, the elderly, the environment, and the immigrant are inextricably linked in a network of priorities.

These concerns, though, subtract nothing of substance from the beauty and impact of the film. I urge everyone who reads this column to see it. Wenders and Focus Features (and the Holy Father himself) deserve our gratitude for offering the world such an exceptional encounter with the Successor of Peter. May it touch thousands of hearts.

PREVIOUS: The importance of amendment 8

NEXT: Thoughts on the Synod: A Thirst for Mentoring