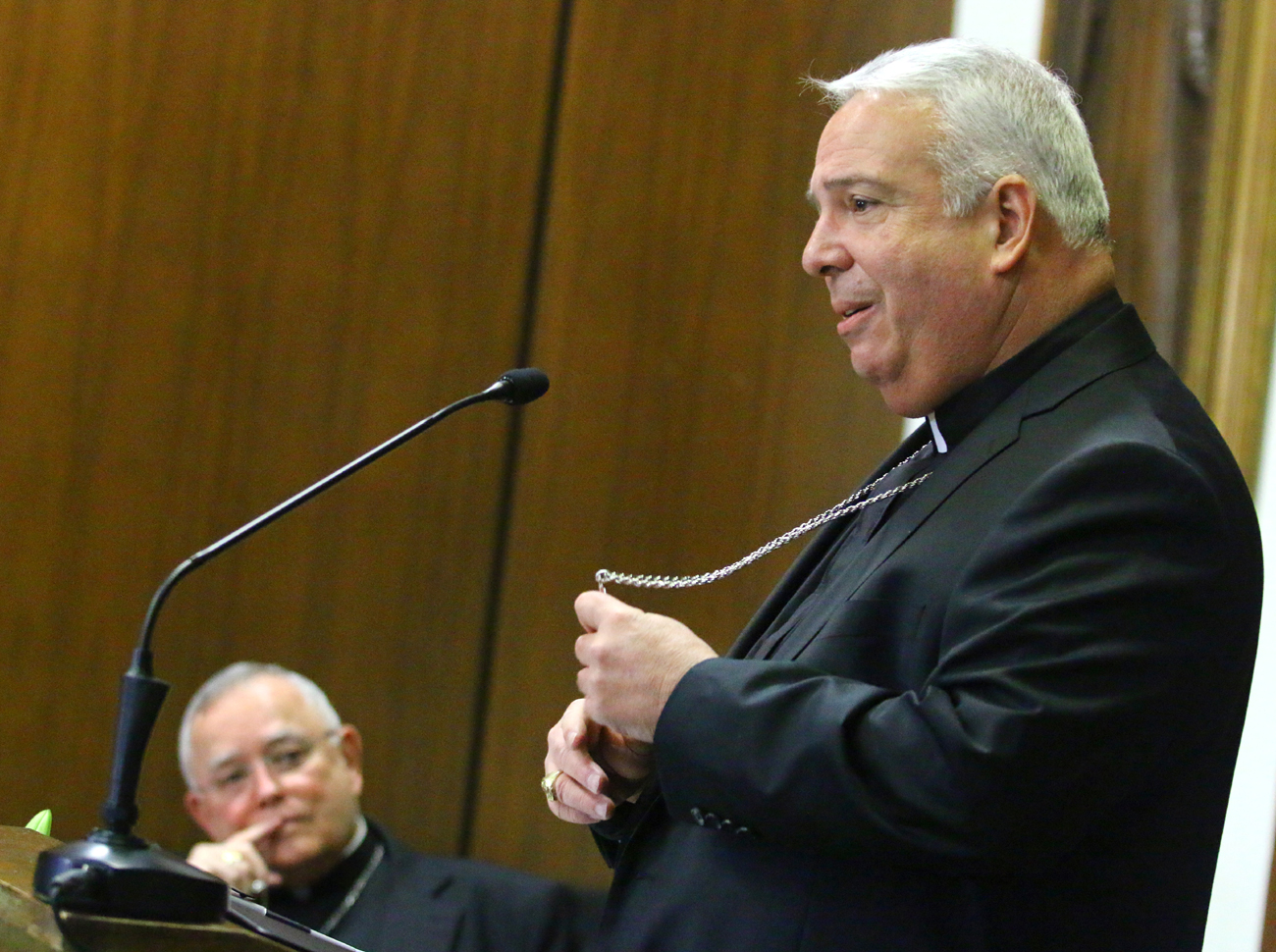 Archbishop-elect Nelson J. Perez shows the audience at a Jan. 23 press conference announcing his appointment as the next archbishop of Philadelphia the pectoral cross he wears — a sign of the office of bishop — which was a gift of his friend and mentor, Archbishop Charles J. Chaput. (Photo by Sarah Webb)

The remarks below were delivered by Archbishop Charles J. Chaput at a news conference Jan. 23 introducing Archbishop-elect Nelson J. Perez as the next Archbishop of Philadelphia.

This is a moment of great satisfaction and joy for the clergy and people of the archdiocese, and for me personally. This past Saturday, the papal nuncio to the United States, Archbishop Christophe Pierre, informed me that Pope Francis had selected Bishop Nelson Perez of Cleveland as the next archbishop of Philadelphia. That appointment is official as of this morning, and his installation will take place on Tuesday, February 18.

When I first spoke with the nuncio about my retirement and this transition last May, I asked for a successor who would care for and guide our people, speak the truth with conviction, and live a faithful witness to Jesus Christ.  Archbishop Perez is a man who already knows and loves the Church in Philadelphia, and is already known and loved by our priests and people. He was ordained as a priest of Philadelphia. He’s a graduate of St. Charles Borromeo Seminary. He’s respected and well-liked by our priests, many of whom are his friends. And he served with distinction as one of our pastors before his ministry as a bishop.

If you want to know what his parishioners thought of him here in Philadelphia, just google his name on CatholicPhilly.com from July 2012, as he was preparing to leave the archdiocese for his service as an auxiliary bishop of Rockville Center. He was enthusiastically supported and very well loved by the people he served as a pastor — and for good reason: He’s a good man, a man of deep Catholic faith, with the skills, character, and warmth that make an exceptional leader.

He’s exactly the man with exactly the abilities our Church needs, and I’m very, very grateful to the Holy Father for sending him home to us to Philadelphia.

So, brother priests, fellow religious, and ladies and gentlemen, I present to you the next archbishop of Philadelphia, Archbishop-elect Nelson Perez. Please keep him in your prayers.