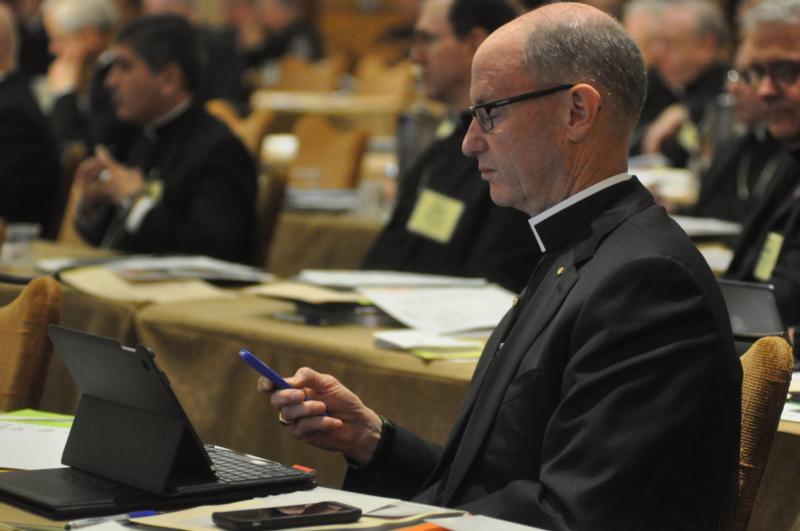 LINCOLN, Neb. (CNS) — Lincoln Bishop James D. Conley apologized Aug. 4 for failing to be more transparent about a pastor removed from ministry and sent to treatment last year because the priest had developed “an emotionally inappropriate, non-sexual relationship with a 19-year-old male which involved alcohol.”

He sent Father Charles Townsend, pastor of St. Peter Parish in Lincoln, to the Shalom Center in Houston for treatment.

“My failure at the time was the lack of transparency with the people of God about this incident,” Bishop Conley said in an open letter to Catholics of the diocese.

“Despite reports to the contrary, I did not oblige anyone to keep silent about this matter. Our priests and the parishioners of St. Peter’s were told that he went away for health reasons. I made no effort to ‘cover up’ any element of this situation, and I tried to address it with integrity,” he wrote.

“However, I did not encourage transparency. I did not encourage an open discussion about this situation with our priests, with parishioners, or with those involved,” he continued. “Even though we were not legally obligated to report the incident, it would have been the prudent thing to do.”

He added, “Because the young man had reached the age of majority, we did not tell his parents about the incident. I deeply regret this lack of transparency and breach of trust.”

Bishop Conley said he was addressing the situation “with a heavy heart.”

“In the past week, several stories were spread on the internet regarding our diocesan culture and the conduct of priests within our diocese,” he said.

News about Father Townsend followed by a couple of days a lengthy article posted online in The American Conservative online by Peter Mitchell, a former priest of the Diocese of Lincoln, now laicized, who leveled accusations against the late Msgr. Leonard Kalin. Before his death in 2008, the priest had been the diocese’s vocations director for about 20 years.

Mitchell accused the priest of sexual improprieties and other misconduct, like gambling and heavy drinking.

“The Diocese of Lincoln is aware of past reports of conduct contrary to prudence and moral law by Msgr. Leonard Kalin, deceased in 2008,” an Aug. 3 diocesan statement said. “The diocese addressed these allegations of misconduct directly with Msgr. Kalin during his time in priestly ministry. The diocese is not aware of any violations of civil law by Msgr. Kalin.”

Bishop Conley in his Aug. 4 letter said: “While Msgr. Kalin was loved by many, others report difficult experiences with him. Allegations were made regarding his moral conduct which included excessive smoking, drinking and gambling.

The bishop encouraged anyone with information such allegations to contact Seth Odgaard, the diocesan safe environment coordinator.

Bishop Conley said that in the next few days he would convene the diocesan review board to examine the situation. It is “an independent group of lay experts in the fields of law enforcement investigation and psychology who answer directly to me,” he said.

“Please be assured, I will take all necessary steps to hold accountable anyone responsible for placing people in unsafe situations within the church,” the bishop added.

He also announced he would appoint Father Craig Doty to be pastor of St. Peter Parish in Lincoln, where Father Townsend had served.

Bishop Conley called Father Doty “a key priest in our diocese for bringing about renewal and healing both in our presbyterate and for the lay faithful. I have asked him to take this assignment as a sign of my own desire for healing.”

Father Townsend’s removal from ministry continues. “This past week we reported this incident (with the 19-year-old) to the civil authorities, Bishop Conley said. “I also met with the man and with his parents and expressed my regrets for failing to inform them. I asked for and received their forgiveness.”

The situation of Father Townsend and the online post about Msgr. Kalin “have caused a great amount of distress for many of you, for many of our priests, and for me as well,” Bishop Conley said. “Many of you have questions about the veracity of these stories, and many of you are concerned that you have been lied to.”

“Satan, the father of lies, is also the father of doubt and division. My fear is that these reports will become a wedge of division within our diocese,” he added.

“As your bishop — called to be your spiritual father — I want to speak to you clearly. I pray that the truth can break through fear, division, and distress, so that we might be healed in Christ — in our hearts, our parishes, and our diocese,” Bishop Conley said. “Jesus, who is the way, the truth and the life, will set us free.”