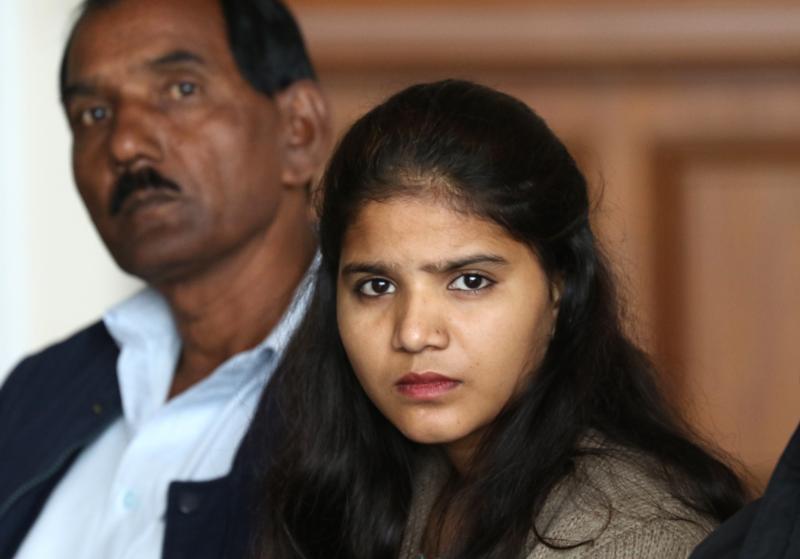 UPDATED – CHESTER, England (CNS) — A court in Pakistan has reached a decision on whether a Catholic woman will become the first person to hang to death under the country’s controversial blasphemy laws.

A special bench of the Supreme Court, sitting in Islamabad, reached a verdict Oct. 8 on the fate of Asia Bibi, but publication has been deferred until a later, unspecified date, according to the British Pakistani Christian Association.

In an Oct. 8 news release sent by email to Catholic News Service, Mehwish Bhatti, an officer of the BPCA who was in the courthouse during the proceedings, said the three judges “have come to a decision, but it has been reserved.”

Christians in Pakistan are conscious of the threat of an outbreak of rioting by Muslim mobs if Bibi is acquitted by the court, the BPCA said in an Oct. 7 press release, even though they are praying ardently for her release.

Bibi has been held in solitary confinement since November 2010, when she was sentenced to hang for insulting Muhammad, the founder of Islam.

Ashiq Masih, her husband, told Catholic News Service in an Oct. 5 interview that if Bibi is released she and her family will immediately seek sanctuary in one of several countries that have offered them exile, because it was too dangerous for them to remain in Pakistan.

Ashiq, a builder from Sheikhupura, Pakistan, was in England with his and Bibi’s youngest daughter, Eisham Ashiq, 18, as guests of Aid to the Church in Need, a Catholic charity helping persecuted Christians.

They said when they visited Bibi in Multan Prison Oct. 1 that she was in good health, contrary to speculation that she was developing dementia.

During the interview at St Columba’s Church, Ashiq said Bibi was praying constantly and that she deeply believed she would win her freedom.

“She is psychologically, physically and spiritually strong,” Ashiq told CNS. “Having a very strong faith, she is ready and willing to die for Christ. She will never convert to Islam.

“She also wanted to deliver a message to the international community that they must remember her in their prayers. These prayers will open the door of the prison, and she will be released very soon,” he said.

“She is spending her life praying with a very strong faith and is reading the Bible every day. She feels when she is praying, Jesus is encouraging and supporting her,” he continued, adding that she also received Communion in jail Oct. 1.

In June 2009, Bibi, who worked as a farmhand, was accused of blasphemy against Islam after Muslim women objected to her drinking from a common water supply because she is a Christian. To have her charged with blasphemy, they took their complaint to an imam, who did not see the incident.

Eisham Ashiq told CNS that, as a 9-year-old girl, she witnessed her mother being severely beaten by a Muslim mob in the aftermath of the accusation.

“I believe in God and I believe she will be released, but she can’t live in Pakistan once she has been released — simple as that,” she said.

Bibi was rescued by police, only to be sentenced to death for violating Section 295C of the Pakistan Penal Code, which makes insulting Muhammad a capital offense.

Bibi’s final appeal represents her last chance at avoiding a death sentence for blasphemy. If the court has upheld the execution order, the only option open to her lawyers will be a direct appeal for clemency to President Imran Khan.

Father Emmanuel Yousaf, national director of Pakistan’s Catholic Commission for Justice and Peace, who was accompanying Bibi’s family on their U.K. tour, told CNS in an Oct. 6 telephone interview that the family remained hopeful of her release.

“We have been waiting for this day for a very long time and thankfully it has finally arrived,” he said. “We are praying continuously for Asia Bibi and we are confident of her acquittal.”

Bibi’s case has divided Pakistan, with millions of Islamic militants reportedly willing to kill her to obtain a reward of 500,000 rupees offered by a Muslim cleric for her murder; some moderate Muslims have called for her release.

Among those who called for her release was the governor of Punjab, Salmaan Taseer, who was assassinated in January 2011 after he said he would fight for her freedom.

Two months later, Minority Affairs Minister Shahbaz Bhatti, a Christian, was gunned down after he said he would seek the reform of the blasphemy laws to stop them being abused to persecute innocent Christians.

Now-retired Pope Benedict XVI is among those to have publicly called for Bibi’s release and, in February, Pope Francis received Ashiq and Eisham at the Vatican, while the Coliseum was bathed in red light to highlight the suffering of contemporary martyrs.

Ashiq said: “The pope encouraged us and said to us, ‘Don’t let your mind be disturbed’ and said ‘Pass on my encouragement to Asia Bibi and bless her as well.’ He said he is praying for her and that he believed she would be freed very soon.

“By meeting him, our faith was boosted,” he said. “We were already believing and have a strong faith, but listening to him really encouraged us.”

“Remember us in your prayers and support us as much as you can so that Asia Bibi can be released very soon,” Ashiq said. “When she is free, she will able to answer questions in person.”

NEXT: Vatican reviewing McCarrick case, vows to pursue truth no matter what