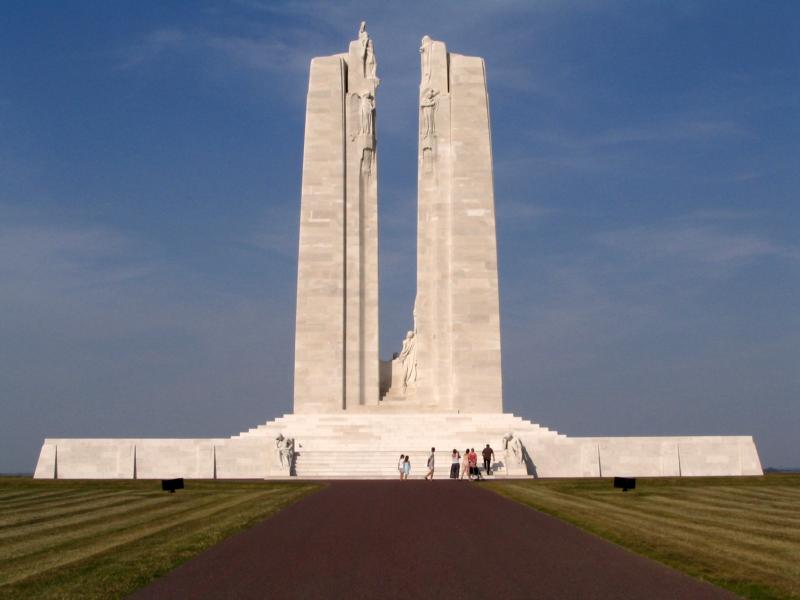 The Canadian National Vimy Ridge Memorial is seen in northern France. The names of more than 11,000 who fought during World War I are commemorated on this memorial. On Nov. 11, many Canadian churches will ring their bells 100 times to mark the 100th anniversary of the end of the war. (CNS photo/Philippe Vaillancourt, Presence)

QUEBEC CITY (CNS) — Churches of the Archdiocese of Sherbrooke will join those of other churches across Canada and ring their bells 100 times Nov. 11 to mark the 100th anniversary of the end of World War I.

The gesture of solidarity comes as many voices call on the Catholic Church to question its old theory of the “just war.”

In the Quebec province’s region of Estrie, the bells will ring at dusk, at 4:22 p.m. They will join those of Parliament Hill, town halls, places of worship, bases and military ships, to recall that when the 1918 armistice was announced in Europe, the bells rang to mark the end of the war.

“We hope that the people who hear the bells will stop and meditate on the losses and sacrifices made, both on the battlefield and in the country,” wrote The Royal Canadian Legion in a document sent to Canadian churches. Across Canada, these Bells of Peace will be struck 100 times, with five seconds between rings.

“The sound of the bells, on Nov. 11, will be an opportunity to remember those who have served our country and sacrificed their lives,” said Father Alain Larochelle, chaplain for the Royal Canadian Legion in Estrie and pastor of Nativity of Jesus Parish of Sherbrooke. It was at his initiative that the Archdiocese of Sherbrooke decided to join the movement.

Before working with veterans, Father Larochelle was a chaplain for the military reserve for 19 years. He has seen the moral toll war can take on people.

“War is not the same as it was 100 years ago. For the First and Second World Wars, what struck us was the death toll. For modern wars, people come back wounded in their minds,” said Father Larochelle.

For the second half of the 20th century, the nature of the conflicts in which Canada was engaged changed. The Korean War resulted in a tense status quo that continues today. Canadian peacekeepers assisted in sometimes-forgotten conflicts. The war in Afghanistan had numerous detractors in Canada.

“We’ll explain why the bells are ringing Sunday. We will explain that the commitment to peace must now be ours. We believe in peace, that all small initiatives to make people aware of peace are worth doing,” said Father Larochelle, who thinks peace remains fragile.

This 100th anniversary coincides with calls for church to put aside its just-war theory, a theological concept that goes back to St. Augustine and was clarified by St. Thomas Aquinas. The theory states in what conditions war may be acceptable to the church. It takes into account the serious and inevitable damage inflicted by the aggressor, considers war as a last resort that has a reasonable chance of succeeding, and calls for consideration of the proportionality between the evils avoided and those caused.

The Second Vatican Council rejected war in the Pastoral Constitution on the Church in the Modern World. Before and after the council, the popes reiterated their opposition to the war, without definitively ruling out the idea of a just war.

Father Larochelle said that, as chaplain, he had difficulty with the theory of just war.

“We don’t have to say if it’s right or wrong. For me, war is war, and we must always do everything to avoid it. And not just the church: the whole of humanity. If we come to war, it’s because something has gone wrong in our system of values.” He said he believes the church has erred in seeking “to want to make good what was wrong.”

In 2016, the Catholic peace organization Pax Christi International took advantage of a conference held in Rome with the Pontifical Council for Justice and Peace to ask Pope Francis to prepare an encyclical that would reject the idea of a just war, and instead promote active nonviolence.

For his annual message for the World Day of Peace Jan. 1, 2017, Pope Francis wrote about nonviolence presented as a “political style for peace.” A few months later, in a book-length interview with French sociologist Dominique Wolton, Pope Francis stated that “no war is just.”

For Catholic ethicist Cory Andrew Labrecque, professor of theology and religious studies at Laval University in Quebec City, there is no doubt that the Catholic Church is slowly moving away from the just-war theory. But in doing so, it must find a way to take into account the reality of modern wars, including the modern means of war, be it the capacity for total destruction associated with nuclear weapons or the asymmetrical dehumanization of the automation of war and death, particularly by drones.

“Where is the moral responsibility of the human being when it is the device that causes death, often at a distance? Since it is a moral burden for a soldier, it is interesting for a state at war to have a technological intermediary that creates a distance from killing,” he said.

Vaillancourt is editor in chief of Presence info, based in Montreal.

NEXT: Eucharist creates the communion the world needs, pope says