At the border, communities vent anger toward Washington 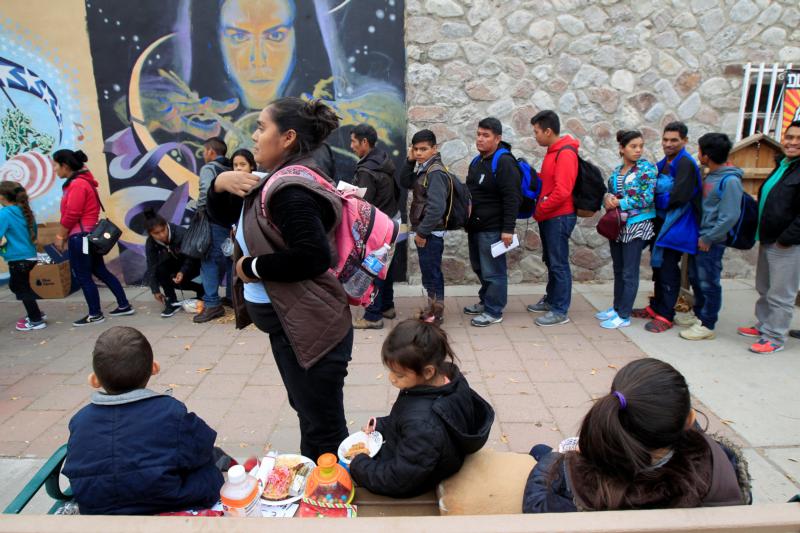 Central American migrants who were dropped off at a bus station in El Paso, Texas, line up for food Dec. 25 as they wait for transportation to emergency shelters. (CNS photo/Jose Luis Gonzalez, Reuters)

WASHINGTON (CNS) — Trash was not picked up around some of the most famous of monuments in Washington, and the White House Visitor Center and other tourist spots in the nation’s capital closed as the president and lawmakers refused to find common ground to end a partial government shutdown.

But Washingtonians, government workers and those visiting Washington during the most recent shutdown — which began in late December over a political disagreement involving money to build a border wall with Mexico — aren’t the only ones venting anger at the country’s political center.

Far from the seat of political power, Catholics working in border communities such as El Paso, Texas, think they, too, have been impacted by Washington’s squabbles, and they expressed anger about experiencing more than just daily inconveniences.

Since late December, many have been responding to what they say are chaotic scenes of migrants being randomly dropped off in their cities and towns near the U.S.-Mexico border by federal immigration officials. Typically, U.S. Immigration and Customs Enforcement, commonly referred to as ICE, gives community groups that work with migrants advance notice about the drop-offs.

The groups then provide or find them shelter, sometimes at facilities run by church organizations, where the migrants can be fed and oriented on a path toward family members or to another destination in the U.S. But the Christmas-time chaos mirrored a similar situation that took place just before Election Day in November, when no advance notice was given and groups were left to help hundreds of hungry and tired migrants with little or no notice.

“I don’t know if this is over the shutdown,” said Dylan Corbett, executive director of the Hope Border Institute in El Paso, Texas, who, along with other fellow El Pasoans, found himself on Christmas Eve and Christmas Day trying to organize food and shelter for hundreds of migrants. Corbett spoke with Catholic News Service Dec. 26 about the situation near the border.

In a statement provided to Catholic News Service Dec. 27, El Paso Bishop Mark J. Seitz confirmed the account of the drop-off of migrants in and around the city.

“We here at the Catholic Diocese of El Paso are very concerned about the hundreds of people being put on the streets in El Paso, at the bus depot, at the airport and at a local park,” Bishop Seitz wrote in the statement. “We understand that the facilities of Homeland Security are overcrowded, but the decision of our government to simply put these children and families with no money, no tickets, no food, no access to phones, out on the street, is inhumane and unconscionable.”

The release of the migrants, which also seemed to have happened in neighboring New Mexico, took place just before and on Christmas Day.

“Clearly, this Christmas the newborn Savior will find no room,” Bishop Seitz wrote.

Places affiliated with the Catholic Church, such as Annunciation House in El Paso, have been accommodating between 300 to 400 migrants daily, “depending upon volunteer efforts and whatever resources we have,” said Bishop Seitz, but the sudden unannounced release of hundreds of them without notice left little time to prepare. And yet, Corbett said, locals lined up to provide tamales, pizza, water, offers of shelter, anything they could get their hands on to feed the hungry and tired crowds. Catholic parishes have made available volunteers and facilities to help, said Bishop Seitz, but he believes the government also needs to own up to what happened.

“Our government has a responsibility, when it takes these refugees into custody, to provide for their basic needs,” Bishop Seitz wrote. “We do as much for death-row inmates. With the recent deaths of two young children, the accounts of mistreatment in holding cells and the heartless expulsion of these families, an undeniable picture is coming into focus and it is not one of which we Americans can be proud.”

Families fleeing from Central America, particularly from countries such as El Salvador, Honduras and Guatemala, have been heading to the United States looking to escape the endemic violence and hunger they are facing, said Bishop Seitz.

“Who among us if faced with similar circumstances would not do the same for our family? ” he asked.

“But instead of helping to improve the situation in their home country, a situation which our nation has contributed to in many ways, especially by our affection for illegal drugs, we mistreat those who seek refuge here so badly that it is hoped others will not come. The truth is they are running for their lives. They will take whatever risks necessary. Meanwhile, we, who are citizens of this most wealthy nation in the world, are going to have to deal with the consequences of our hardened hearts.”

But there was little hope in sight for any compromise during what remained of the term of Congress ending Jan. 3. Some place the blame at the feet of a president bent on fulfilling a campaign promise to build a wall on the U.S. border with Mexico, a wall he said the U.S. neighbor to the south would pay for.

“The president’s strategy on the wall was flawed from the beginning, as he failed to make an effective case for it and was unwilling to compromise,” said Kevin Appleby, senior director of international migration policy at the New York-based Center for Migration Studies. “Just because the wall got a response at campaign rallies did not make it good policy.”

On Dec. 27, the drop-offs continued but, by then, some of the aid groups were once again briefed by immigration officials on their numbers so they could go back to the routine of preparing to help the migrants.

Many worried, however, that just like the government shutdown, periodic acts aimed against migrants would continue, and they urged politicians to put their differences aside to find lasting solutions to stem the flow and the danger posed to human beings who face the consequences of policy.

“Now maybe Congress can focus on a package for Central America that addresses the root causes of migration,” said Appleby. “This is the most effective and humane solution to the exodus.”

NEXT: Ohio legislature looks ahead after one vote short on abortion bill