Camino walk helps young man find path that leads him, others to Christ 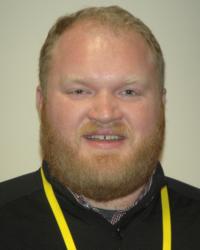 Shea McMahon, a missionary with the Fellowship of Catholic University Students, is pictured Jan. 5 during SEEK2019 at the Indiana Convention Center. (CNS photo/John Shaughnessy, The Criterion)

INDIANAPOLIS (CNS) — Shea McMahon’s journey of faith has led him on some incredible adventures, including walking the Camino in France and Spain, and living in England trying to help college students embrace a relationship with Jesus Christ.

Still, the pivotal point of his journey began in his hometown of Indianapolis five years ago when the then-24-year-old McMahon found himself at a crossroads in his life.

“I walked away from my faith in college,” said McMahon of his time at Indiana University in Bloomington. “When I was 24,” he added, “I met an old friend who was involved in IndyCatholic,” the nickname of the Indianapolis Archdiocese’s Office of College Campus and Young Adult Ministry.

“My friend invited me to a men’s group, and there I encountered Christ by the witness of their own personal relationships with him,” McMahon continued. “After that, I just had a lot of wounds I wanted healing from. I felt God wanted me to walk, so that’s what I did. I walked the Camino.”

For 40 days in the fall of 2014, McMahon walked 600 miles along the ancient pilgrimage path that leads to the Cathedral of St. James at Santiago de Compostela.

That walk focused the direction of his life, said McMahon, who shared his story during a break at SEEK2019 — the conference established to give college students and other young adults the opportunity to have a deeper encounter with Jesus. This year’s gathering drew more than 17,000 participants from around the world to Indianapolis Jan. 3-7.

“On the Camino, you have so much time to pray and think,” McMahon told The Criterion, newspaper of the Indianapolis Archdiocese. “I developed a prayer life, an internal life that was ongoing. I was in a consistent, constant prayer with our Lord. I realized the grace Jesus had given me, not only to walk but the grace for eternal happiness and eternal joy. I needed to share that with other people.

“I met a lot of Europeans who didn’t know Jesus, and they didn’t have a relationship with him. After that, I had a great desire in my heart to serve people in Europe and help them with an encounter with Jesus.”

That desire led him to become a missionary with FOCUS — Fellowship of Catholic University Students — the organization that directs the SEEK conferences and that strives to “share the hope and joy of the Gospel” with college students and other young adults.

In his past two years with FOCUS, McMahon has served as a missionary at the University of Southampton in England. The experience has come with its challenges and its graces.

“You’re walking into a new culture and learning to evangelize in a new culture. Going to a new country where you don’t know anybody other than the three missionaries you were sent with, I had to rely on Christ for my sense of home, for my security. The things I find comfortable were stripped away from me. I had to go to Jesus to find those things.

“I’ve been able to give more of my heart to him. Whenever we give our heart to Jesus, he gives his heart back exponentially more than we could ever give him.”

He viewed coming home to Indianapolis for the Christmas season and for the conference as another one of God’s gifts to him.

“It has been really amazing to see my worlds colliding in this way,” said McMahon, a 2007 graduate of Roncalli High School who grew up in St. Jude Parish, both in Indianapolis.

“I have friends here, family here, people who are supporting me in my mission, and people who have been involved in my conversion. I’m so excited for the city of Indianapolis and for the impact the conference will have on the church here.”