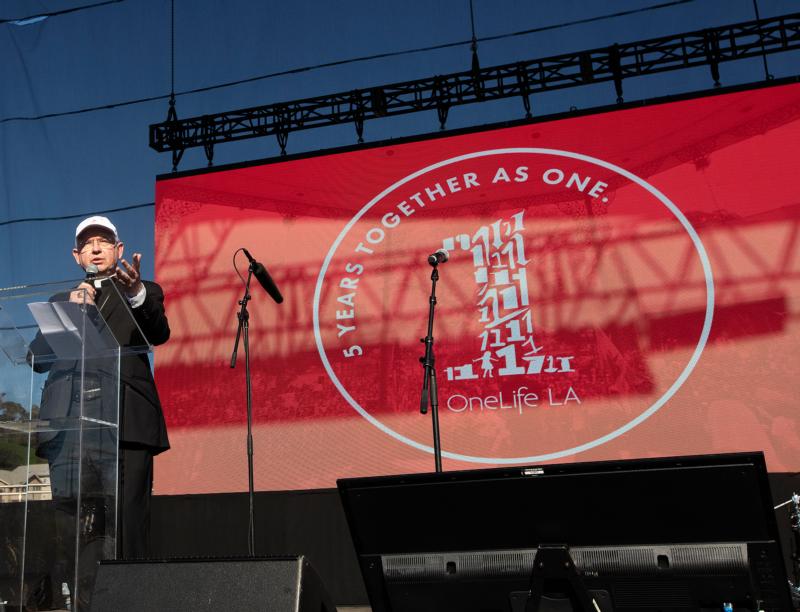 Archbishop Jose H. Gomez of Los Angeles addresses the crowd gathered for the OneLife LA rally Jan. 19, 2019, in Los Angeles. The event was one of many held across the country to mark the Jan. 22 anniversary of the U.S. Supreme Court’s 1973 decision legalizing abortion. (CNS photo/Victor Aleman, Angelus News)

LOS ANGELES (CNS) — The annual OneLife LA “is about the light, not the darkness,” said Los Angeles Archbishop Jose H. Gomez, who was joined by about 15,000 Southern Californians for the fifth annual event Jan. 19.

“OneLife LA is not only an event, it is a vision,” he said in welcoming the crowd. “In a society that promotes a selfish ‘me against you’ individualism, OneLife LA celebrates people who are living lives of self-sacrifice, generosity and service.”

The event kicked off at noon at the city’s birthplace, La Placita. After he delivered his remarks, the archbishop, along with the archdiocese’s auxiliary bishops, led the pro-life walk from Olvera Street to Los Angeles State Historic Park for the official program and celebration.

Keynote speaker Lizzie Velasquez, a global motivational speaker, YouTube personality, anti-bullying activist and author, shared her story of overcoming bullying, which she started to suffer at a young age due to her appearance caused by a rare disorder that prevents her from gaining weight. The fact that she is vision-impaired only added to the challenges she faced.

Velasquez shared how the unconditional support of her family helped her become a strong woman and motivate others to speak up against bullying.

“When I was born, I had a lot of medical issues. The doctors told my parents basically, ‘Expect nothing,’ and right then, my parents said, ‘God sent her to us for a reason and we’re going to love her to the best of our ability,'” Velasquez said.

“Whenever bad things happen, I don’t have that instant, ‘Why God?’ question that comes into my mind like it did when I was younger,” she said. “Now, when something bad happens or I see something bad happening to other people, I instantly ask myself, ‘What is the lesson? What are you trying to teach me in this?'”

Also addressing the audience was Abby Johnson, a former Planned Parenthood director who has become a prominent pro-life activist after resigning in 2009.

“For me, it’s been a journey of healing to know that the world is seeing me when I was at my worst but also gets to see my heart changing and the ultimate redemption through the grace of God,” said Johnson, who will be portrayed in the movie “Unplanned,” based on her book with the same name.

Beatriz Sandoval, formerly a homeless mother who uses her experience to fight homelessness and poverty in Los Angeles, shared in Spanish her story of financial and mental struggles that she and her family overcame in part with the support of their church community.

“Thanks to my treatment, to our friends and to my work, I was able to start my life again and that of my family,” said Sandoval. “Even though I forbade my daughters to talk about this, they shared it with people from our church and with their counselors at school. That began another learning process to receive the generosity, compassion and love of others, who were not our blood family, but they behaved as if they were.”

Before and after the family faced its own troubles, they have been “very involved in matters of social justice in our community,” she said. “I never thought that I would need the services that I always advised people to get in order to have a safe and decent place to live.”

The event was emceed by Gloria Purvis, host of EWTN Radio’s “Morning Glory,” and Damon Clarke Owens, founder and executive director of JoyToB, a ministry centered on St. John Paul II’s theology of the body.

The crowd also heard from Dr. Jose Villela Vizcaya, a Mexican psychiatrist who, as a medical student, faced a car accident that left him without mobility and sensitivity in most of his body. He became a renowned public speaker, and is currently a swimmer who competes in the U.S. Paralympics. He is ranked in the top 10 within his category.

The day concluded with the annual Respect Life Mass celebrated by Archbishop Gomez at the Cathedral of Our Lady of the Angels.

“We are praying tonight for the unborn. This word — unborn — reminds us that life begins long before we ever see it,” he said in his homily. “The Bible tells us that every human life begins with the desire of God.

“Before God forms us in the womb, he knows who we are, and he knows who he wants us to be. Even before we are born, God has plans for us.”

He said that “every abortion is a personal tragedy — for the child, for the mother and father, for the family, but each abortion also is “a divine tragedy, a sadness deep in the heart of God.”

“It blocks God’s plan for a child he loves, for a soul he wants to be born,” Archbishop Gomez said.

“Let us work every day to build a new city and a new nation — where every human life is loved and protected; where it is easier to love and to give life,” he said.

“OneLife LA is a very simple concept,” said Kathleen Domingo, senior director of the Office of Life, Justice and Peace.

PREVIOUS: Birth mother and daughter who reunited a year ago march for life together