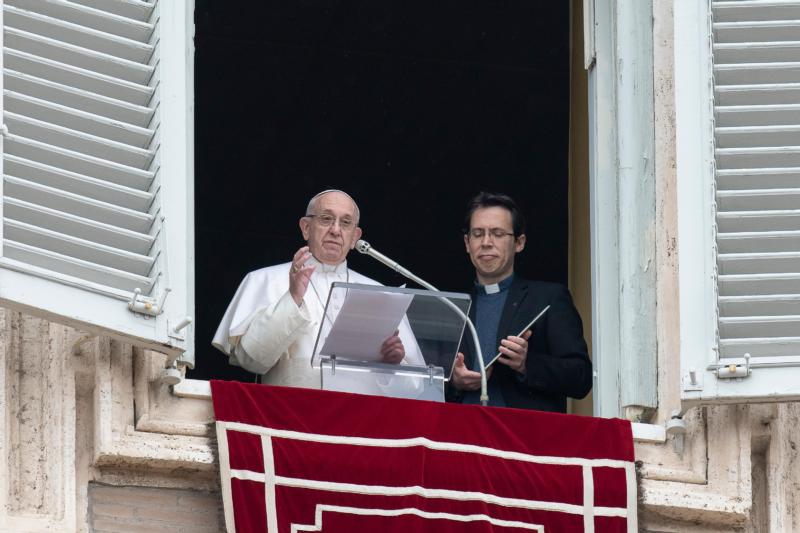 Pope Francis is pictured next to Jesuit Father Frederic Fornos, head of the international Apostleship of Prayer, during the Angelus led from the window of his apartment overlooking St. Peter’s Square at the Vatican Jan. 20. The pope used a tablet held by Father Fornos to launch “Click to Pray,” a new mobile app and online platform. (CNS photo/Vatican Media)

The Catholic Church and all people of goodwill see great potential in social media when the “net” and “networks” bring people together, help them share useful information and educate one another, he said.

But, the pope wrote, people’s “social web identity is too often based on opposition to the other, the person outside the group: We define ourselves starting with what divides us rather than with what unites us, giving rise to suspicion and to the venting of every kind of prejudice — ethnic, sexual, religious and other.”

Pope Francis’ message for World Communications Day, which most dioceses will celebrate June 2, cites a passage from Ephesians, “We are members one of another,” and focuses on moving “from social network communities to the human community.”

Although the pope was in Panama for World Youth Day, the Vatican kept its tradition of releasing the pope’s message Jan. 24, the feast of St. Francis de Sales, patron saint of journalists.

Pope Francis’ latest foray into social media aims to promote that. During his Angelus address Jan. 20, he launched a new mobile app and online platform where he shares his prayer intentions, and people around the world share theirs. Then everyone can “click to pray” with one another.

Jesuit Father Federic Fornos, international director of the Pope’s Worldwide Prayer Network, said that in the first three days, 167,000 people downloaded the Click to Pray app, and the “click to pray” button on individual prayer intentions was clicked more than 1 million times Jan. 20-22.

The online and on-phones prayer community joins the much larger papal social media accounts on Twitter and Instagram.

On both platforms, the pope has a higher than average “engagement rate,” which goes beyond how many people see the posts to how many take the time to comment, “like,” “retweet” or share.

According to Twipu, a site that tracks Twitter statistics, each of Pope Francis’ tweets generates an average of 935 replies, 7,998 retweets and 36,750 likes.

In an early December article, the Twiplomacy website listed Pope Francis as No. 4 on the list of the “most followed world leaders on Instagram.” He came behind Indian Prime Minister Narendra Modi, Indonesian President Joko Widodo and U.S. President Donald Trump.

More importantly from the point of view of his Communications Day focus on community, Pope Francis is also in fourth place on world leaders’ Instagram interactions. Each photo or video posted by the Vatican, the site said, garners an average of 198,432 interactions.

On Twitter, Twiplomacy said, @Pontifex is the second most-followed world leader after Trump and comes in third — behind Modi and Trump — on the list of “most influential,” which is an interaction rate based on the sum of comments, retweets and likes divided by the number of tweets and the average number of followers.

“Twiplomacy Study 2018,” an annual review of diplomacy through social media conducted by the BCW international media consulting firm, said, “The U.S. president has also changed the tone of discourse on Twitter, frequently insulting his opponents and lampooning foreign leaders.”

Obviously, Pope Francis’ social media accounts do not do that.

In his World Communications Day message, Pope Francis said that forming strong communities, even online, requires people who are “animated by feelings of trust” and are pursuing a common objective. “The community as a network of solidarity requires mutual listening and dialogue based on the responsible use of language.”

And he cautioned that while social media can promote “encounter,” they also can “increase self-isolation,” a risk to which young people are particularly vulnerable.

Opposing cyberbullying, isolation and division, he said, Christians are called to use online resources “to invest in relationships and to affirm the interpersonal nature of our humanity, including in and through the network.”

What is more, Pope Francis said, when online “we Christians are called to manifest that communion which marks our identity as believers. Faith itself, in fact, is a relationship, an encounter, and under the impetus of God’s love, we can communicate, welcome and understand the gift of the other and respond to it.”

Virtual communities are worthy of the name community and of Christian participation only if they strengthen a personal encounter “that comes alive through the body, heart, eyes, gaze, breath of the other,” the pope wrote.

And, he said, “if the net becomes an opportunity to share stories and experiences of beauty or suffering that are physically distant from us in order to pray together and together seek out the good to rediscover what unites us, then it is a resource.”