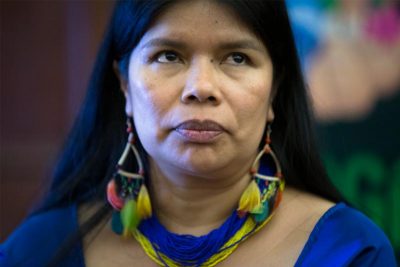 Patricia Gualinga, a member of the Kichwa indigenous community of Sarayaku, Ecuador, is seen during a press conference at the Integral Ecology summit at Georgetown University in Washington March 20, 2019. (CNS photo/Tyler Orsburn)

WASHINGTON (CNS) — In indigenous Kichwa communities, women like Patricia Gualinga have traditionally taken on the role of wife, mother and cultivator of the crops that families use to survive in Ecuador’s Amazonian region of Sarayaku.

In recent years, however, as corporations and other entities looking to extract precious minerals and resources have entered indigenous communities’ ancestral lands in the Amazon, that role has expanded to include community leader and defender of the environment for women like 49-year-old Gualinga.

Women have increasingly participated as leaders at the national and international level in the Amazon’s environmental activist circles, she said, in part because women — in addition to experiencing firsthand environmental degradation and its impact on the family — also experience abuse, exploitation and greater marginalization that has skyrocketed with the exploitation of the environment.

Others were not discussing those abuses, that’s why women stepped up, Gualinga said in a March 22 interview with Catholic News Service, during an international “Integral Ecology” conference at Georgetown University in Washington. The conference was held in anticipation of an October Synod of Bishops on the Amazon at the Vatican.

Though the laity will not be able to vote at the synod, that does not mean women such as Gualinga, members of indigenous communities, and others won’t have a voice or an impact at the Vatican gathering, said Cardinal Claudio Hummes. The Brazilian cardinal is president of the Pan-Amazonian Church Network (REPAM for its acronym in Spanish), one of the main players for the Vatican meeting that plans to raise awareness and an action plan to fight environmental degradation and its consequences, such as global warming and displacement of indigenous communities in the Amazon region.

Women, including many from indigenous communities, have been invited to participate, including as auditors at the synod, allowing them to voice their growing concerns, said Cardinal Hummes.

“We recognize that when we speak about the church in the Amazon, women play a special part in it, a great part in it,” Cardinal Hummes said during a March 20 news conference at Georgetown. “Many are at the forefront of their (church) communities in the absence of priests.”

And increasingly, many are at the forefront of physical attacks against activists as conflicts over lands and resources grow. Last year, Gualinga’s home was attacked with rocks and she was physically threatened following years of her objections and activism against extractive industries that threaten Kichwa communities and lands in Ecuador.

Though Gualinga filed a complaint about the attack, the perpetrator was never brought to justice.

To church leaders such as Cardinal Hummes, women play an important part in the “new paths” the church can pursue in greater cooperation with indigenous communities whose existence is at peril given environmental and other threats in their midst in places such as the Amazon.

Many women, along with indigenous communities, participated in the initial phase of consultations that took place in November to prepare for the synod, Cardinal Hummes said. The question of women’s role in the church in the Amazon was “explicitly considered,” with some discussion about ministries for them, Cardinal Hummes said, adding that it was hard to say at this point what those may look like, since the discussion is ongoing.

Because of the role laywomen, as well as of women religious in the Amazon, have played in the defense of the environment and in indigenous communities, the church “must open spaces” for them, said Gualinga.

NEXT: Co-creators of pro-life film say God planned film ‘for such a time as now’