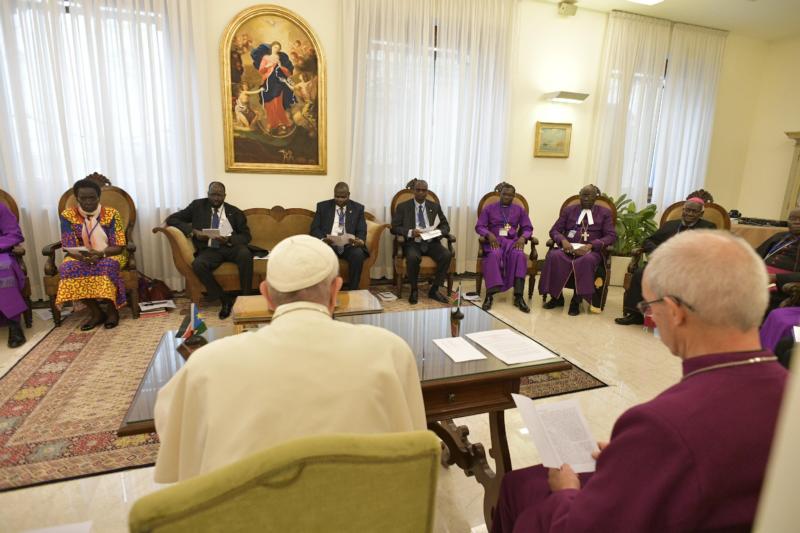 Pope Francis, seated beside Anglican Archbishop Justin Welby of Canterbury, gives an address April 11, 2019, at the conclusion of a two-day retreat at the Vatican for the political leaders of South Sudan. Members of the South Sudan Council of Churches, which has been working to end the civil war, also participated. (CNS photo/Vatican Media via Reuters)

VATICAN CITY (CNS) — At the end of a highly unusual spiritual retreat for the political leaders of warring factions, Pope Francis knelt at the feet of the leaders of South Sudan, begging them to give peace a chance and to be worthy “fathers of the nation.”

“As a brother, I ask you to remain in peace. I ask you from my heart, let’s go forward. There will be many problems, but do not be afraid,” he told the leaders, speaking without a text at the end of the meeting.

“You have begun a process, may it end well,” he said. “There will be disagreements among you, but may they take place ‘in the office’ while, in front of your people, you hold hands; in this way, you will be transformed from simple citizens to fathers of the nation.”

“The purpose of this retreat is for us to stand together before God and to discern his will,” he said in his formal remarks April 11, closing the two-day retreat in the Domus Sanctae Marthae, the Vatican guesthouse where he lives.

The retreat participants included South Sudanese President Salva Kiir and four of the nation’s five designated vice presidents: Riek Machar, James Wani Igga, Taban Deng Gai and Rebecca Nyandeng De Mabior. Under the terms of a peace agreement signed in September, the vice presidents were to take office together May 12, sharing power and ending the armed conflict between clans and among communities.

The retreat was the idea of Anglican Archbishop Justin Welby of Canterbury, spiritual leader of the Anglican Communion, who attended the final part of the gathering. He and Pope Francis have been supporting the peace efforts of the South Sudan Council of Churches and, the pope said again April 11, they hope to visit South Sudan together when there is peace.

Pope Francis told the politicians and members of the Council of Churches that “peace” was the first word Jesus said to his disciples after the resurrection.

“Peace is the first gift that the Lord brought us, and the first commitment that leaders of nations must pursue,” he told them. “Peace is the fundamental condition for ensuring the rights of each individual and the integral development of an entire people.” 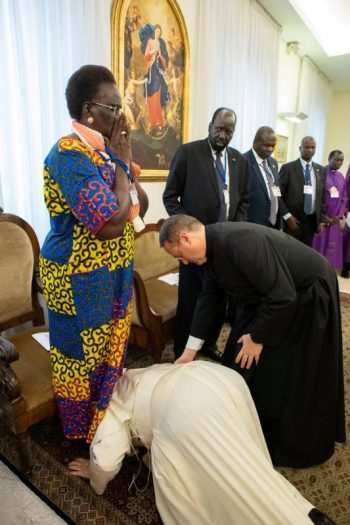 When South Sudan gained its independence from Sudan in 2011 after years of war, the people were filled with hope, the pope said. Too many of them have died or been forced from their homes or face starvation because of five years of civil war.

After “so much death, hunger, hurt and tears,” the pope said, the retreat participants “have clearly heard the cry of the poor and the needy; it rises up to heaven, to the very heart of God our father, who desires to grant them justice and peace.”

“Peace is possible,” the pope told the leaders. They must tap into “a spirit that is noble, upright, strong and courageous to build peace through dialogue, negotiation and forgiveness.”

As leaders of a people, he said, those who govern will have to stand before God and give an account of their actions, especially what they did or didn’t do for the poor and the marginalized.

Pope Francis asked the leaders to linger a moment in the mood of the retreat and sense that “we stand before the gaze of the Lord, who is able to see the truth in us and to lead us fully to that truth.”

The leaders, he said, should recognize how God loves them, wants to forgive them and calls them to build a country at peace.

Jesus, he said, calls all believers to repentance. “We may well have made mistakes, some rather small, others much greater,” but Jesus always is ready to forgive those who repent and return to serving their people.

“Dear brothers and sisters,” he said, “Jesus is also gazing, here and now, upon each one of us. He looks at us with love, he asks something, he forgives something, and he gives us a mission. He has put great trust in us by choosing us to be his co-workers in the creation of a more just world.”

Pope Francis expressed his hope that “hostilities will finally cease — please, may they cease — that the armistice will be respected, and that political and ethnic divisions will be surmounted.”

Closing his prepared remarks with a prayer, he asked God “to touch with the power of the Spirit the depths of every human heart, so that enemies will be open to dialogue, adversaries will join hands and peoples will meet in harmony.”

“By your gift, Father, may the whole-hearted search for peace resolve disputes, may love conquer hatred and may revenge be disarmed by forgiveness, so that, relying solely on your mercy, we may find our way back to you,” he prayed.

NEXT: Catholic leaders condemn bulldozing of crosses at site of executions