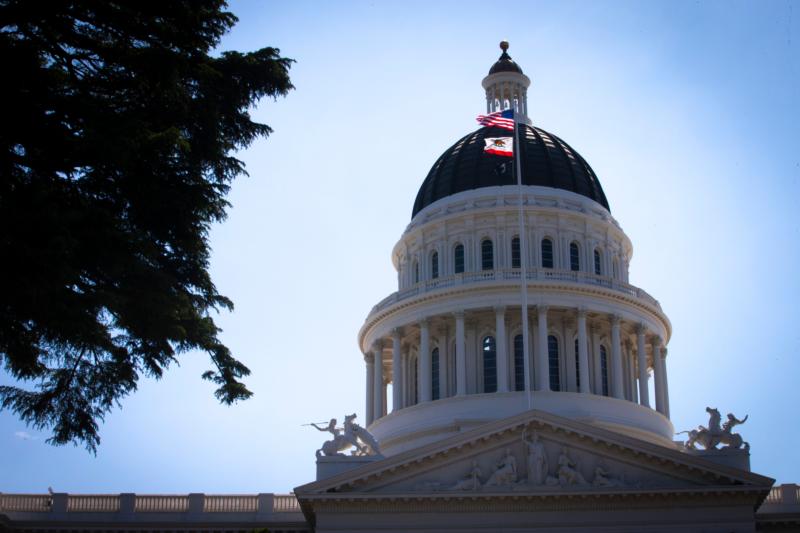 U.S. and California flags fly in front of the dome of the California Capitol in Sacramento May 9, 2019. California state Democratic Sen. Jerry Hill has introduced legislation that would require priests in the state to report to authorities information related to child sexual abuse learned in confession. (CNS photo/Chaz Muth)

LOS ANGELES (CNS) — A bill making its way through the California Legislature would make the state the first since 1999 to require priests to choose between violating the law or violating the seal of the confessional.

At issue is the serious matter of child sexual abuse. Seven states right now require priests to violate the seal to report child abuse based on legislation passed in the 1970s and through the 1990s.

While many states have tried since 2002 to pass laws resembling the California Senate measure, S.B. 360, none have been successful. Instead, lawmakers around the country concluded similar bills would not protect children and would be a violation of religious liberty.

The summer of 2018 — with its Pennsylvania grand jury report on alleged abuse by priests and other church workers (with many claims decades old), the revelations of sexual misdeeds by then-Cardinal Theodore E. McCarrick of Washington and investigations by state attorneys general into clergy abuse records — brought the battle against sexual abuse back to the confessional.

In California, priests, along with teachers, social workers, doctors and other professionals, are “mandated reporters.” That means they are required by law to report any case of suspected abuse to authorities. Currently, there is an exemption in the law for any clergy member “who acquires knowledge or a reasonable suspicion of child abuse or neglect during a penitential communication.”

The bill’s sponsor, Democratic state Sen. Jerry Hill, said the legislation is necessary because of evidence that the confession privilege hurts children.

“Recent investigations by 14 attorneys general, the federal government and other countries have revealed that the clergy-penitent privilege has been abused on a large scale, resulting in the unreported and systemic abuse of thousands of children across multiple denominations and faiths,” Hill said.

Proponents of the bill spoke at a Senate Public Safety Committee hearing in Sacramento April 2 stressing that their reports of abuse to faith leaders from various religions had gone unaddressed.

State Sen. Hannah-Beth Jackson, who spoke at the hearing in favor of the bill, said: “The state, the people do have the right to limit certain practices that are believed to be inappropriate (and) immoral.”

“We are a society. We are governed by laws, we are governed by what we believe to be morally correct, and what is in the best interest of our communities and society'” she said. “And I would submit having, accepting … condoning, allowing this kind of behavior to continue on a claim of religious freedom, is anathema to everything we hold dear.”

“This has got to stop,” she added.

But not everyone sees it this way. Catholic leaders, committed to ending sexual abuse in the church and in the broader society, say there is no evidence for Hill’s allegations the “penitential exemption” is being abused. They also question whether the members of the legislature understand how confession works.

The bill does not explicitly single out confession or the Catholic faith. Instead, it uses the term “penitential communications” without naming specific religions.

California law protects any confidential communication between a person of faith and his or her minister, said Dominican Father Pius Pietrzyk, a canon and civil lawyer who teaches at St. Patrick’s Seminary and University in Menlo Park.

In an interview with the Los Angeles Archdiocese’s Angelus News, he said that “so long as the person has an expectation of confidentiality with regard to that spiritual matter, all those communications do not fall under the (mandated) reporting requirement” in California law.

In an op-ed piece against the proposed legislation in the April 28 edition of USA Today, Father Pietrzyk said that historically U.S. courts “have almost universally upheld a ‘priest-penitent’ privilege, akin to the attorney-client privilege.”

“Although not directly taken up by the U.S. Supreme Court, the privilege is also rooted in the constitutional imperative not to prohibit the free exercise of religion,” he wrote.

He said the bill wrongly conflates current reporting requirements applied to state-licensed employees — doctors, lawyers, and social workers, to name a few examples — with those of priests, who are not licensed by the state.

“Unless Senator Hill is contending that priests must be licensed by their state, essentially, he’s turning priests into agents of the state, which is precisely what the First Amendment is meant to avoid,” he said.

The priest said the bill’s authors do not seem to understand that the sacrament of reconciliation is a communication that is not like others broadly classified as “penitential communications.”

Only confession, as understood by Catholic church law, has an “absolute inviolability,” meaning that the priest is forbidden to disclose any information gained in the sacrament, under pain of excommunication from the church.

While the proposed law focuses on sexual abuse, this kind of legislation can lead to a “slippery slope” in which the state demands that priests disclose other sinful actions that also happen to be illegal.

“Would the state determine that priests are obligated to report these offenses to the authorities, should they hear of them in the confessional?” he added.

And since 2002, seven other states — Massachusetts, Kentucky, Connecticut, New Hampshire, Maryland, Nevada and Florida — have tried to pass their own versions of a similar bill.

Church advocates in those states pointed out several problems with the bills, including the difficulty of a priest identifying a penitent (since the sacrament itself doesn’t require a person to identify themselves), concerns about government intrusion and the First Amendment’s protections regarding the free exercise of religion.

Father Pietrzyk said there’s an argument to be made that “mandatory reporting laws can push people away from seeking the help that they need, or from coming forward” out of fear of the law.

Ultimately, however, he sees the bill as “opening the doorway to a greater entanglement” in which “essentially the state of California is forcing priests to be agents of the state, even within the confessional.”

He said the bill “is putting a cloud over innocent priests” and he believes its intent is to scare the church.

The California Catholic Conference, the public policy arm of the state’s Catholic bishops, and the Pacific Justice Institute, an evangelical Christian pro-bono legal advocacy group in California, are leading efforts to resist the bill.

Andy Rivas, director of the California Catholic Conference, said the existing state law requiring priests and ministers to be mandated reporters is something that the state’s bishops “believe is right and important.”

“However, there is no evidence that forcing priests to disclose what is learned in the confessional would prevent a single case of child abuse,” Rivas told Angelus News.

“There is every reason to believe that doing away with the privacy of the confessional, a core principle of our Catholic tradition and doctrine, would create confusion, discourage spiritual counseling and deter many from seeking a closer relationship with God without gaining any protection for children,” he added.

The Senate Appropriations Committee had a hearing on the measure scheduled for May 16. A crucial vote in the state Senate is expected by the end of May.