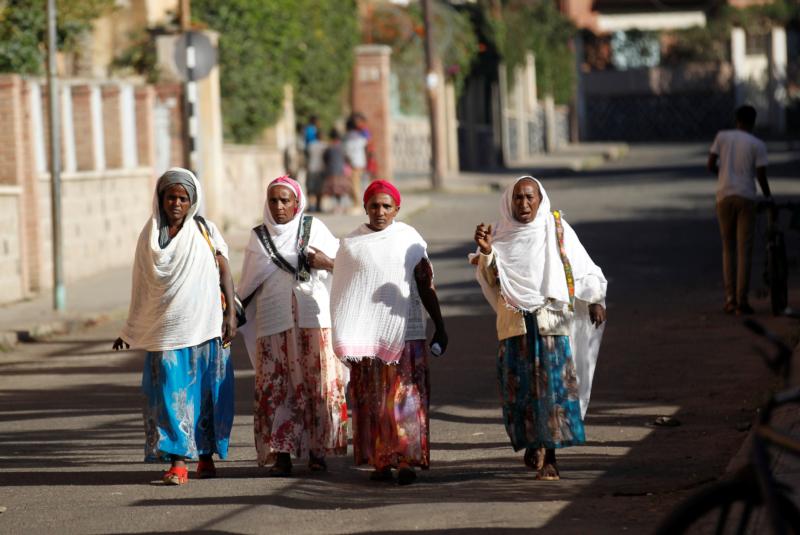 Women walk along a street Feb. 20, 2016, in Asmara, Eritrea. The nation’s bishops said that because of years of war and unrest, “young people, mothers, children and families have become victims of exile and of destabilization.” (CNS photo/Thomas Mukoya, Reuters)

ASMARA, Eritrea (CNS) — Eritrea’s bishops have called for a comprehensive truth and reconciliation plan to be set up and urged that hate speech be banned in the effort to achieve peace.

The plan should include “the establishment of a national commission entrusted with the campaign for truth and reconciliation, with clear and precise objectives and methods of work,” the bishops said in an April pastoral letter. “Its main task should be the removal of the factors of tension and the promotion of dialogue and compromise among all the stakeholders.”

In July 2018, Eritrean President Isaias Afwerki and Ethiopian Prime Minister Abiy Ahmed signed a peace pact in the Eritrean capital, Asmara, to bring an end to the two-decade war between the east African countries. An estimated 80,000 people are believed to have been killed between 1998 and 2000 during a fierce border conflict. However, after the two countries signed a U.N.-brokered border agreement in 2000, they failed to implement it.

The precondition for the current plan’s success is the “recognition of the injustice and violence done by those who had any role at any level,” the bishops said, noting that perpetrators need to admit “their responsibilities with honesty and truth.”

Also, the victims should be ready to forgive, they said. “Reconciliation and mutual forgiveness are the inescapable prerequisites for the birth of a social order.”

It is essential that in the implementation of the plan and beyond, “terminologies and expressions of hatred, violence and revenge” are banned “in the mass media of communication and in the educational institutions at all levels,” the bishops said. “A grammar and a vocabulary of peace, forgiveness and reconciliation” are critical, they said.

The “plans and paths of peace we undertake” must be “broad and inclusive spaces in which all the true seekers of peace and goodness take part,” they said.

“We cannot approve or endorse nation-building schemes in which some people are privileged at the expense of others who are ignored, marginalized or excluded,” the bishops said. “We need willingness to listen and accept ideas and suggestions of others.”

The bishops said that “as religious leaders” they are always “available to offer our contribution, if requested, when useful or appropriate.”

Noting the severe hardships suffered by the people of Eritrea and Ethiopia, they said, “we pray that the demarcation of borders may be agreed as soon as possible, and that this may be done with criteria capable of generating peace, prosperity and the genuine interests of both populations.”

Once a province of Ethiopia, Eritrea voted to separate in 1993 after a violent, decades-long independence struggle.

While “we remember the enthusiasm” that followed the peace initiatives between Eritrea and Ethiopia “and we thank God for these initiatives, we nevertheless also call to mind those in lands of exile, in prison and in the hands of ruthless traffickers and exploiters,” the bishops said.

“Over the years, because of war and other related factors, the living conditions of our people” have reached critical levels, they said. “In different ways, our young people, mothers, children and families have become victims of exile and of destabilization.”

“Since no serious remedy and no plans were put in place to heal this situation, the massive fleeing abroad continues,” they said.

Hundreds of thousands of people have fled Eritrea in recent years, with many making perilous journeys through deserts and across the Mediterranean Sea to Europe.

The crisis projects “before our eyes gloomy, and not imaginary, perspectives that may endanger our people and our nation to the point of extinction,” the bishops said.

Only those who are “willing to sit around a table for a genuine dialogue for peace and reconciliation will help to open new and unexpected ways out from this tragic state of affairs,” they said.

This truth and reconciliation plan is the way to “close the past and open a new era,” to build the country and “lay the foundations of a constitutional state system, to ensure the exercise of the rights of the nation over its borders and ports, as well as to ensure peace” inside Eritrea and in its neighboring countries, they said.