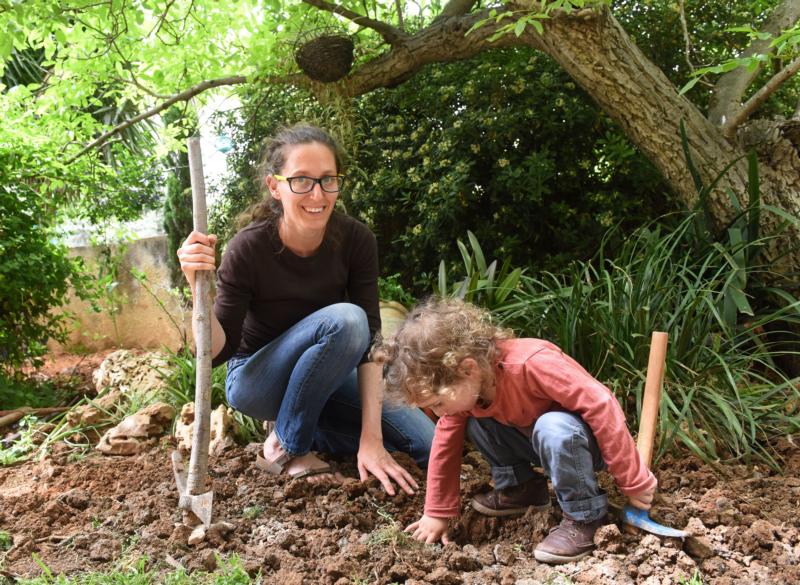 Morgan Cooper works in the family garden with her son Kamae in Ramallah, West Bank, May 1, 2019. She is from California and her husband, Saleh Totah, is from the West Bank. (CNS photo/Debbie Hill)

BETHLEHEM, West Bank (CNS) — What was meant to be one of the happiest of occasions for the Zoughbi family became a nightmare because of Israeli policy on family reunification for foreign spouses of Palestinians.

For almost 30 years, American-born Sandra Elaine Lindower, 56, has been married to Zoughbi Zoughbi, founder and director of the Wi’am: The Palestinian Conflict Transformation Center and a well-known and internationally respected Catholic Palestinian peace activist. They have raised their four children together in the ancestral Zoughbi home compound in Bethlehem.

Lindower was scheduled to return from a trip to the United States in April in time to help begin planning the wedding of her son — the first of her children to be married. Instead, the family was thrust into a whirlwind of Israeli regulations when Lindower was denied entry at Israel’s Ben Gurion Airport for overstaying her visa; she was deported back to the U.S.

On May 15, following a Catholic News Service inquiry into her case, the Israeli Defense Ministry’s Coordinator of Government Activity in the Territories, which oversees the visa process for foreign spouses of Palestinians, informed Lindower that she would be permitted to enter if she places a bond. She must enter through the Allenby Bridge Crossing along the border with Jordan and will receive a three-month visa. The agency said the “entry of holders of foreign citizenship … is not a given right.”

“We just want her back in time for the wedding” May 26, said Zoughbi, 56. “Love can’t be based on borders and politics or on countries. It is a basic human right to create a family together.”

Lindower and other foreign spouses of West Bank Palestinians say their requests to receive a permanent status based on the right of family reunification are being denied, leaving them in a constant state of limbo. Essentially, the opportunity for a foreign spouse to obtain status through family unification has been frozen since 2009.

According to the Right to Enter Campaign, which tries to provide information to spouses and highlight their plight, an estimated 25,000 foreign spouses remain in the Palestinian territories with only a tourist visa, are denied any normalized status and have family unification requests pending. The tourist visas that spouses are issued must be renewed often, requiring spouses to travel abroad. Sometimes the visas are renewed only for three months, other times for longer, and many now are only single-entry visas.

For some time, family reunification for Palestinians in general has only been possible under “special humanitarian circumstances,” which do not include marriage.

In March, German national Josefin Herbach and her husband, Abed Salaymah, a Palestinian resident of the West Bank, took their case to the Israeli Supreme Court, demanding that her status as a foreign spouse be normalized. The court gave the state until September to provide its new policy regarding the status of foreign spouses, said Israeli lawyer Yotam Ben-Hillel, who is representing the couple.

“The suspicion arises that the real reason behind the decision (not to normalize a status) is a racist-demographic one. Namely, to prevent the inclusion of new people in the population registry in the territories and to encourage others, such as the plaintiff, to leave the West Bank,” said Ben-Hillel.

In addition to the family unification freeze, the past two years have also seen an “alarming escalation” in denials of long-term visas to foreign spouses and in the “frequency and range of arbitrary demands and conditions” imposed by the Israeli authorities on such long-term visas, he said.

“Altogether, this has left Palestinian families with foreign spouses without the ability to reside in the (West Bank), with the intended purpose of forcing families to leave Palestine,” said Ben-Hillel.

Most foreign spouses are hesitant to go public with their stories for fear that it will jeopardize their ability to renew their visas, said one American foreign spouse, a Catholic who asked that her name not be used. COGAT officials also monitor social media accounts belonging to foreign spouses to see if they post what are deemed to be “political” posts, she said.

“They just want people like us to leave,” she said. “It just keeps getting worse and worse.”

Foreign spouses must sign Hebrew-only documents to renew their visas. Requirements or prohibitions are changed without warning; they are detained at the borders, denied entry and required to make security deposits as high as $19,000 to be permitted to return to their homes for a few months.

Once an Israel airport border security officer told her she should “take her Palestinian husband and go to America” if she wanted to avoid all the visa hassles, said Morgan Cooper, 38, an American who has been married to Saleh Totah since 2012. The Totah family, whose origins are Catholic, is one of the four founding families of Ramallah, but most of the extended family has emigrated.

“Saleh will never consider leaving Ramallah. It is so important to him to raise his son Palestinian and make this stand as a Christian. I’ve put down roots here like I have never put down anywhere else,” said Cooper, sitting on the sun porch of her Ramallah home as she watched her 2-year-old son, Kamae, search for a lost turtle in the side garden.

Totah runs an adjacent cafe, serving some dishes made from the organic vegetables they grow on their home’s rooftop garden. They are building an arboretum on land on the outskirts of Ramallah.

Though it seems like Cooper has carved out a little slice of paradise for herself, it is more like a gilded prison that she cannot leave.

As with all foreign spouses, Cooper has permission only to be in the West Bank, called “Judea and Samaria” by Israel. She is not allowed to work or volunteer anywhere and must regularly renew her visa to be able to remain in Ramallah with her family.

In Bethlehem, it has been a difficult time for Zoughbi and his family as they simultaneously prepared for the wedding and struggled to find a solution that would allow Lindower to rejoin them for the wedding.

Still, Zoughbi said he has kept his faith.

“Faith and hope are two … values I believe in. Nothing will break that. Nothing will push me to lose faith,” Zoughbi said. “Of course, there is some anger, but I transfer my anger to hope. Faith keeps my sanity alive.”

NEXT: As migrants continue streaming into Mexico, donor fatigue sets in