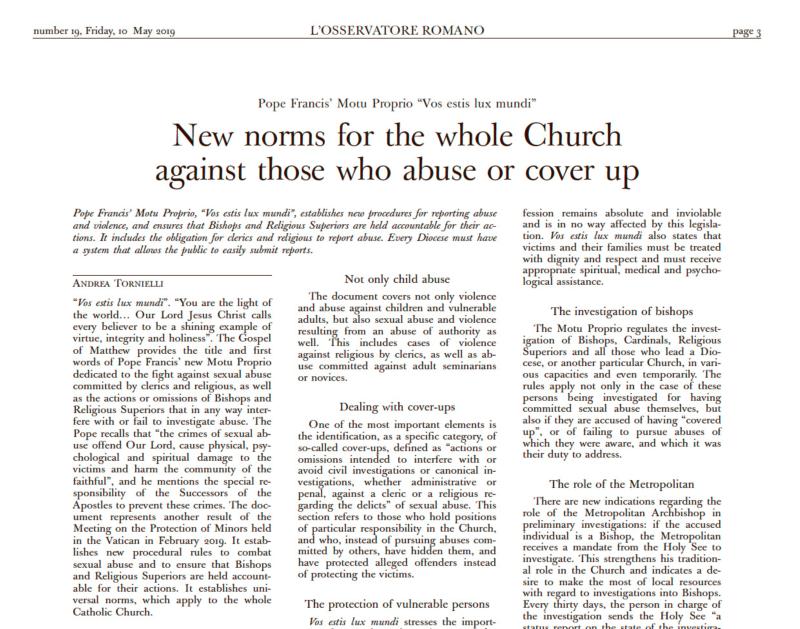 Commentary in the May 10 edition of the Vatican’s L’Osservatore Romano newspaper explains “Vos estis lux mundi,” Pope Francis’ new universal law establishing procedures for reporting and investigating abuse within the church. The new law takes effect June 1. The commentary was written by Andrea Tornielli, the editorial director of the Vatican Dicastery for Communication. (CNS photo/Vatican)

VATICAN CITY (CNS) — Pope Francis’ latest effort to help the Catholic Church safeguard its members from abuse and hold its leaders accountable came in the form of a new universal law, “Vos estis lux mundi” (“You are the light of the world”), which takes effect June 1.

Like all universal legislation, the papal document had to factor in the vast diversity of cultures and traditions of the more than 200 countries where the church is present, Archbishop Charles Scicluna, the Vatican’s top abuse investigator, told reporters the day the document was released in May.

It had to strike a balance of being clear and precise, but not so narrow that “it would be inoperative. You need something that can be flexible enough to work,” the archbishop said.

But as Jesuit Father Arturo Sosa, the order’s superior, warned during the safeguarding summit at the Vatican in February, the church also must never use its “multicultural reality” to justify, excuse or ignore abuse. No matter the culture or local attitudes, the fundamental principle guiding everyone must be to follow the Gospel message, always and everywhere, bringing to light the truth that sets everyone free, he said.

In the end, it becomes clear a law can’t fix a problem by itself if there is no implementation or too loose an interpretation that fails to fulfill the law’s desired intent.

The critical companion needed to make any law effective is the active cooperation and unity of leaders and laity — the entire universal church to whom the law is addressed.

Mercy Sister Sharon Euart, a canon lawyer and executive director of the Resource Center for Religious Institutes, based in Silver Spring, Maryland, praised many of the provisions in the pope’s new document, issued “motu proprio” (on his own accord).

“The questions I and others may have about implementation are not based on the merits of the ‘motu proprio,’ but on how it is going to work in a particular setting” when dioceses and others set up the mandated reporting mechanisms, she told Catholic News Service by phone May 23.

“There will always be some lacunae; as you implement any law you find that out” and flag those gaps that would need to be addressed, said Sister Euart, who is a consultant to the U.S. bishops’ Committee on Clergy, Consecrated Life and Vocations and past president of the Canon Law Society of America.

Not only does the “motu proprio” call for compassion “across the board for those affected” by abuse, but those leaders charged with implementing the new law also should recognize the compassion extended to them, she added.

“The superior or the bishop or the metropolitan is not making these decisions alone, but (is urged) to take the advice of those who have the expertise. That is a sign of compassion because the expertise of others informs how the law is going to be applied and you want to apply it in a way that respects both the intention of the law as well as the persons involved,” Sister Euart said.

The Second Vatican Council profoundly changed the way the church and its Code of Canon Law were to function, she said. While the ultimate purpose of all laws in the church is the salvation of souls, its principles focus less on penalties and punishment and more on pastoral outreach and personal responsibility.

Revised laws not only recognized the need for individuals to take personal responsibility for carrying out their mission or ministry, “if you couldn’t handle that responsibility, then there were provisions in the law for that and that was a wonderful revision.”

It recognizes there was something wrong with the way allegations against bishops or religious superiors were being dealt with, he said, and it establishes new procedures aimed at “getting reporting right” worldwide.

“It sets the tone for the whole church and it also recognizes that (abuse) is not just an American or Western issue,” he told CNS by phone from Belgium May 23.

But what is going to be most important, he said, is “how adult is everyone going to be when dealing with this law” locally by actually following through with mandatory reporting and taking victims seriously.

Experience in the United States showed that process “didn’t come automatically” when procedures for dealing with allegations of abuse against minors by clergy were established in 2002.

Creating a climate of trust will also be key, he said, because even though the law has whistleblower protections, “people may still be reluctant to report because they are afraid, and fear is not something you can legislate away.”

The major problem with the abuse scandal, in fact, he said, had been leaders not implementing what was already present in canon law.

“Implementing the law will always be a challenge, but that shouldn’t be an argument to do nothing,” he said, adding that new norms with penalties can always be established later if “people don’t take it seriously.”

Martens said it was necessary to deal with reporting and accountability with universal law because not only do “you get recognition that this is not a local problem but is worldwide,” but also so everyone is prompted to be adequately prepared despite what they believe about the extent of abuse.

The professor said he tells his students the Code of Canon Law and other church legislation “is your tool box” and it contains everything needed to fix a problem.

“But it doesn’t tell you what to do in a particular case, it’s up to you. And that is always the case with universal law,” he said. It is up to people on the ground making sure it works.

All of this, as well as the reform of the Roman Curia, requires what Pope Francis continually calls for: a conversion of hearts, a focus on service and collaboration. “And that is something you can’t legislate,” Martens said.

“It’s time to roll up your sleeves and get to work.”

The reporting systems will need to be set up before anyone can see how well they work and where they need adjustments. “But we will only find out by doing it,” Martens said.