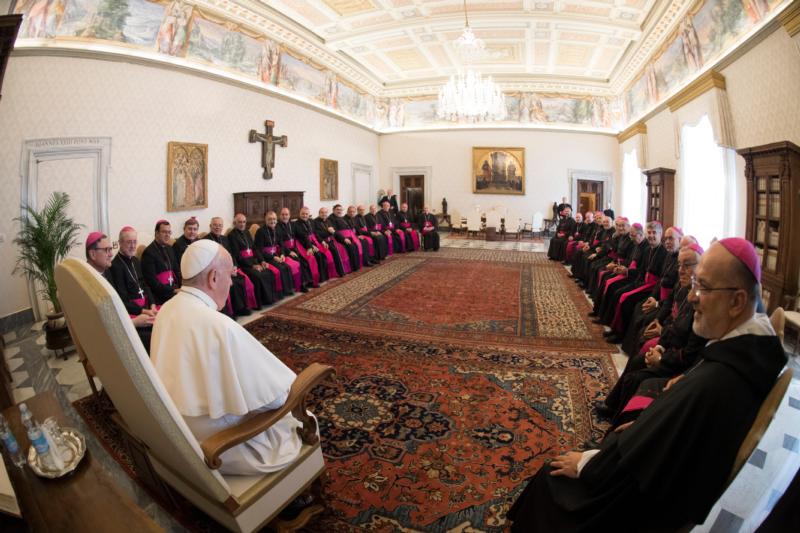 Pope Francis meets with bishops from the Argentine episcopal conference at the Vatican May 2, 2019. The bishops were making their “ad limina” visits to Rome to report on the status of their dioceses, pray at the tombs of the apostles and meet with Vatican officials. (CNS photo/Vatican Media)

VATICAN CITY (CNS) — Pope Francis told a group of Argentine bishops on pilgrimage in Rome that although he wants to visit his homeland, current obligations impede him from fulfilling his wish, the bishops said.

The pope met with the first of two groups of bishops from Argentina’s coastal and northeastern regions May 2 during the “ad limina” visit that bishops are required to make to the Vatican.

According to Argentine newspaper La Nacion, Archbishop Victor Manuel Fernandez of La Plata told journalists that while the pope expressed his hope to visit his homeland, “we have no indication of a ‘yes’ or a ‘no’; we only know that it is difficult.”

Archbishop Andres Stanovnik of Corrientes added that the pope “also spoke about the difficulties he has due to an already intense travel agenda to other countries which delay a visit” to Argentina,” La Nacion reported.

The Argentine bishops also said that during their meeting, which lasted over two hours, the pope discussed the pastoral needs of the country and expressed “sadness” at increasing tensions in the country, particularly regarding the issue of abortion, which remains illegal.

According to Arabic news channel Al-Jazeera, thousands of women protested in Buenos Aires in February in an attempt to relaunch a campaign to legalize abortion after legislation failed to pass through the Senate in 2018.

The Catholic Church in the country has faced backlash for their opposition to legislation that would legalize the practice.

“The existence of social tension was mentioned as a concern by several bishops. You know that there is a polarization in Argentina and in the case of abortion that polarization was further affirmed,” Archbishop Fernandez said. “(The pope) said that it hurts because it makes young people reluctant to listen to us, after all this period of so much discussion and with so much strength.”

NEXT: Australian church to review governance after sex abuse inquiry