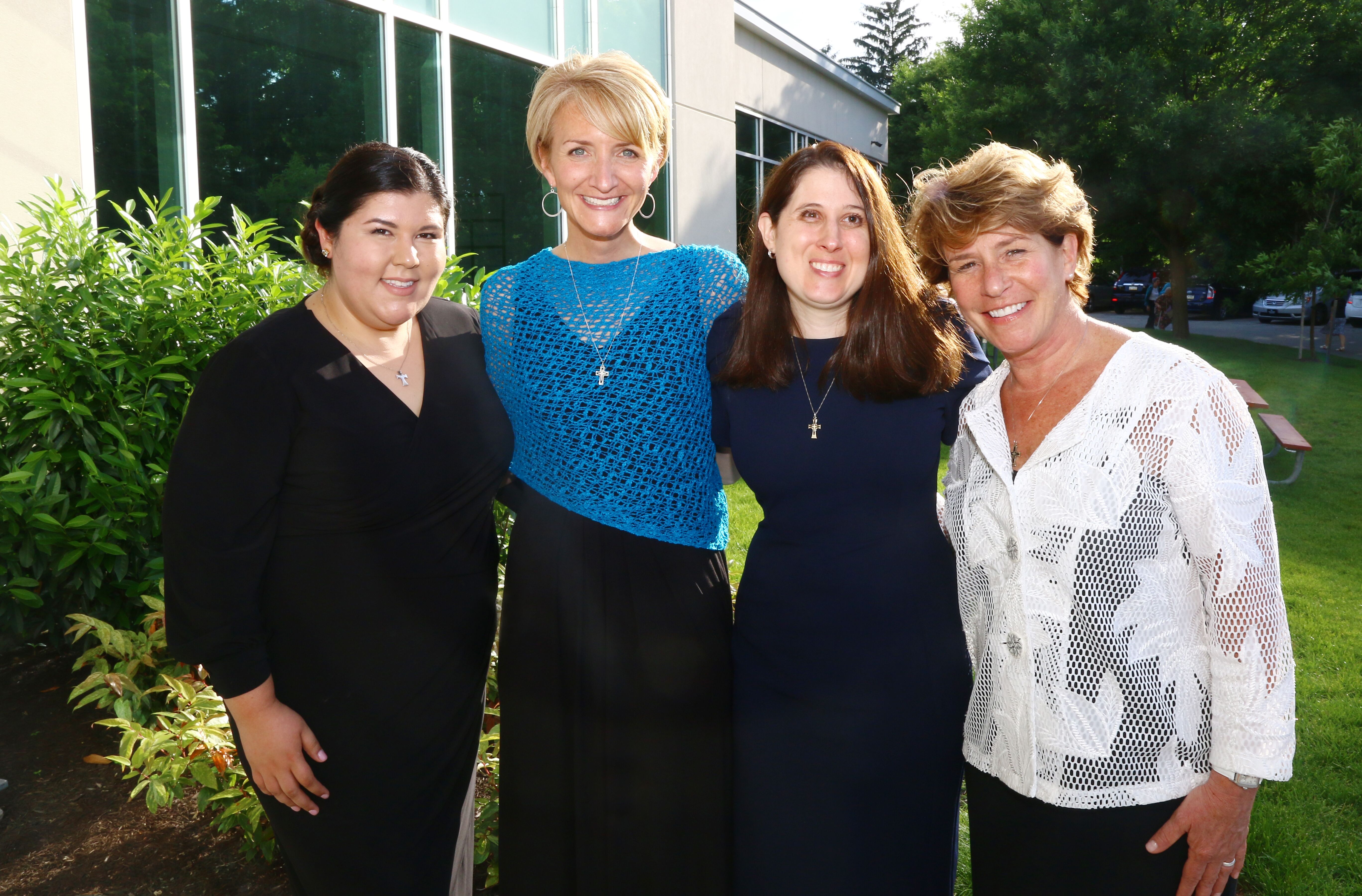 Mercy Sisters Margie Tapia, Danielle Gagnon, Jennifer Barrow and Marybeth Beretta celebrate becoming lifelong members of the Sisters of Mercy after they professed their final vows in the Convent of Mercy Chapel in Merion, June 8. (Photo by Sarah Webb.)

Four women recently professed their final vows as Sisters of Mercy of the Americas, Mid-Atlantic Community, in the chapel in the Convent of Mercy in Merion.

Sisters Marybeth Beretta, R.S.M., the president of an all-girls Catholic high school; Jennifer Barrow, R.S.M., an attorney in Brooklyn, New York; Danielle Gagnon, R.S.M., a development consultant; and Marjorie Tapia, R.S.M., a geriatric nurse practitioner, became permanent members of the Sisters of Mercy of the Americas, one of the largest congregations of Catholic sisters in the United States.

More than 500 sisters, family members, associates and friends gathered on June 8 gathered for the liturgy, which was celebrated by Augustinian Father Kevin DiPrinzio. Sister Patricia Vetrano, R.S.M., president of the Sisters of Mercy’s Mid-Atlantic Community, welcomed the guests.

Sister Patricia McDermott, R.S.M., president of the Institute of the Sisters of Mercy of the Americas, questioned the women regarding their desire to live religious life.  The four sisters then individually pronounced and signed their vows, receiving rings (inscribed with personalized mottos) which symbolized their perpetual pledges to chastity, poverty, obedience, and service to those who are poor, sick, and ignorant.

“These four extraordinary women decided to dedicate their lives to God and live in community as Sisters of Mercy. Through prayer and service, they will respond to the changing needs of our times,” said Sister Patricia Vetrano, R.S.M. “The Sisters of Mercy welcomed these four faith-filled members with open arms, joyful applause, affirmation and song.”

All four of the congregation’s newly-professed members have had extensive educational and professional experience. 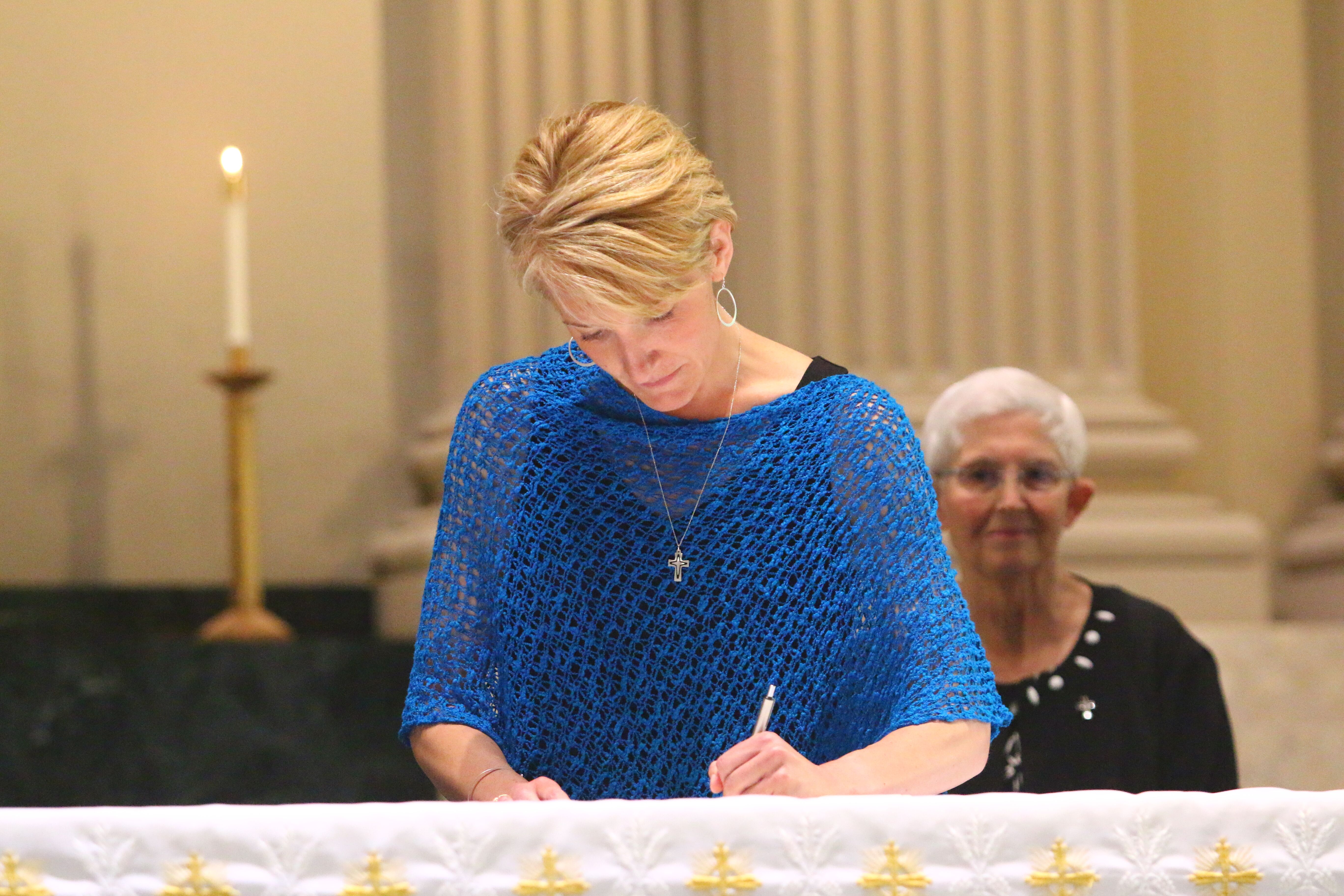 Sister Danielle Gagnon, R.S.M., signs her perpetual vows as a Sister of Mercy. Sister Danielle ministers as a development consultant for Cranaleith Spiritual Center in Philadelphia, while studying to be a spiritual director. (Sarah Webb)

Sister Jennifer Barrow, R.S.M., attended Boston College, graduating with a bachelor’s degree in theology and Hispanic studies. She spent the year 2003 in Laredo, Texas with Mercy Volunteer Corps, serving as a bilingual case manager in the Hachar-Cigarroa Women’s Clinic. After her service, she attended Boston College Law School, graduating in 2010 with a J.D. degree. Admitted that same year to the New York Bar Association, she currently ministers as an immigration lawyer at Brooklyn Legal Services in the Brooklyn borough of New York City.

Sister Marybeth Beretta, R.S.M., currently serves as the president of St. Mary Academy, Bay View in Riverside, Rhode Island. She first encountered the Sisters of Mercy while attending Salve Regina University, and after more than 20 years as the chief financial officer of La Salle Academy in Providence, she decided to enter the order.

Sister Danielle Gagnon, R.S.M., previously worked for Medicines for Humanity, a non-profit organization that operates maternal and child health projects in developing countries. She also worked at Hope Partnership for Education in North Phila., and served as executive director of St. Patrick’s Center in Wilmington, Del., a non-profit that serves those who are homeless. Sister Danielle is currently a development consultant to Cranaleith Spiritual Center, a conference and retreat center in Philadelphia, while also studying to be a spiritual director.

Sister Marjorie Tapia, R.S.M., attended Mount Saint Mary Academy, a private Catholic girls’ high school, in Watchung, New Jersey, volunteering at McAuley Hall, the retirement facility for the Sisters of Mercy on the school’s campus. Sister Margie became a Mercy associate in her junior year of college at Boston College, where she earned a nursing degree. After completing a master’s degree in nursing from New York University, she worked as a geriatric nurse practitioner and as an adjunct faculty member for the College of St. Elizabeth. A licensed nursing home administrator, Margie currently serves as a director of healthcare and aging services for the Religious Teachers Filippini in Morristown, New Jersey. Several sisters from this congregation attended the June 8 profession.

The Sisters of Mercy, an international religious community of Roman Catholic women, minister to people who are poor, sick, and in need of education, with a particular focus on outreach to women and children. Over 2,500 sisters serve in 11 countries and 42 state.