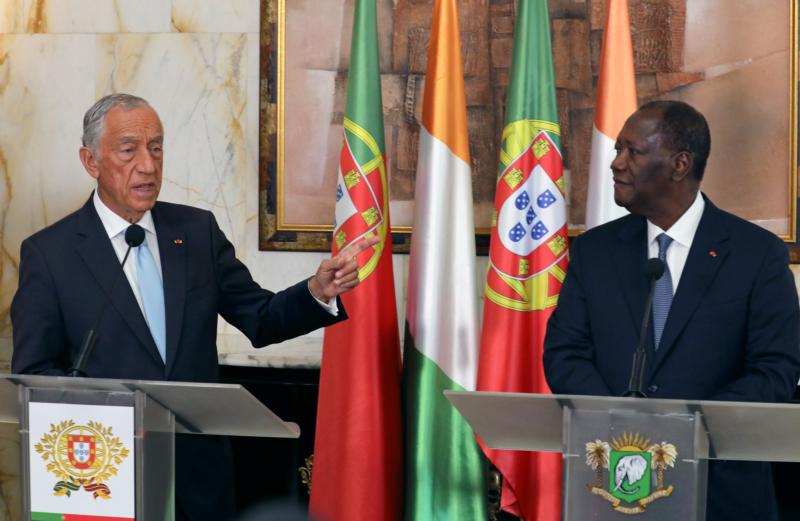 Portuguese President Marcelo Rebelo de Sousa speaks during a joint news conference with Ivory Coast President Alassane Ouattara at the Presidential Palace in Abidjan, Ivory Coast, June 13, 2019. Bishops in the Ivory Coast have warned of a new civil war in the run-up to 2020 elections, unless urgent action is taken to ease communal tensions and withdraw weapons in the West African state. (CNS photo/Thierry Gouegnon, Reuters)

AGBOVILLE, Ivory Coast (CNS) — Bishops in the Ivory Coast have warned of a new civil war in the run-up to 2020 elections, unless urgent action is taken to ease communal tensions and withdraw weapons in West African state.

“Wishing to exorcise the old demons of hatred and division, we express spiritual proximity and compassion to families who have lost their loved ones and possessions. To all actors of social and political life at any level, we make this heartfelt appeal: Let us avoid another war!”

The message was issued after the conference’s June 17-23 plenary in Agboville, after a wave of violent intercommunal conflicts.

“In the name of peace, we specially urge the government to pursue and implement a disarmament process, since it is no secret that weapons are still circulating,” the bishops added.

“In every intercommunal conflict, long knives and weapons of war are regularly and professionally used, which naturally traumatizes our population.”

“Certainly, building peace is not an easy task. Nevertheless, we demand with insistence from those who hold our people’s destiny in their hands: avoid another war.”

Catholics make up 20% of the 20 million inhabitants of Ivory Coast; Muslims make up about 35%.

In 2017, the bishops’ conference urged calm after army mutinies and civil service strikes against the government of President Alassane Ouattara. Tensions are expected to continue until the October 2020 ballot, which will see the election of a new 255-seat National Assembly and head of state following Ouattara’s second and final term.

In May, curfews were imposed and police reinforcements deployed after prolonged communal clashes at Beoumi left 16 dead and over 100 injured, while on June 26 the government announced plans to end widespread child labor by increasing women’s incomes and building schools.

News reports said tensions had sharpened because of the presence of over 60 ethnic groups in Ivory Coast, as well as large numbers of immigrants from nearby Burkina Faso, Ghana and Mali.

NEXT: Amid tensions in China, Vatican tells clergy to follow their conscience