Kids saddle up for safety with help from Philly police 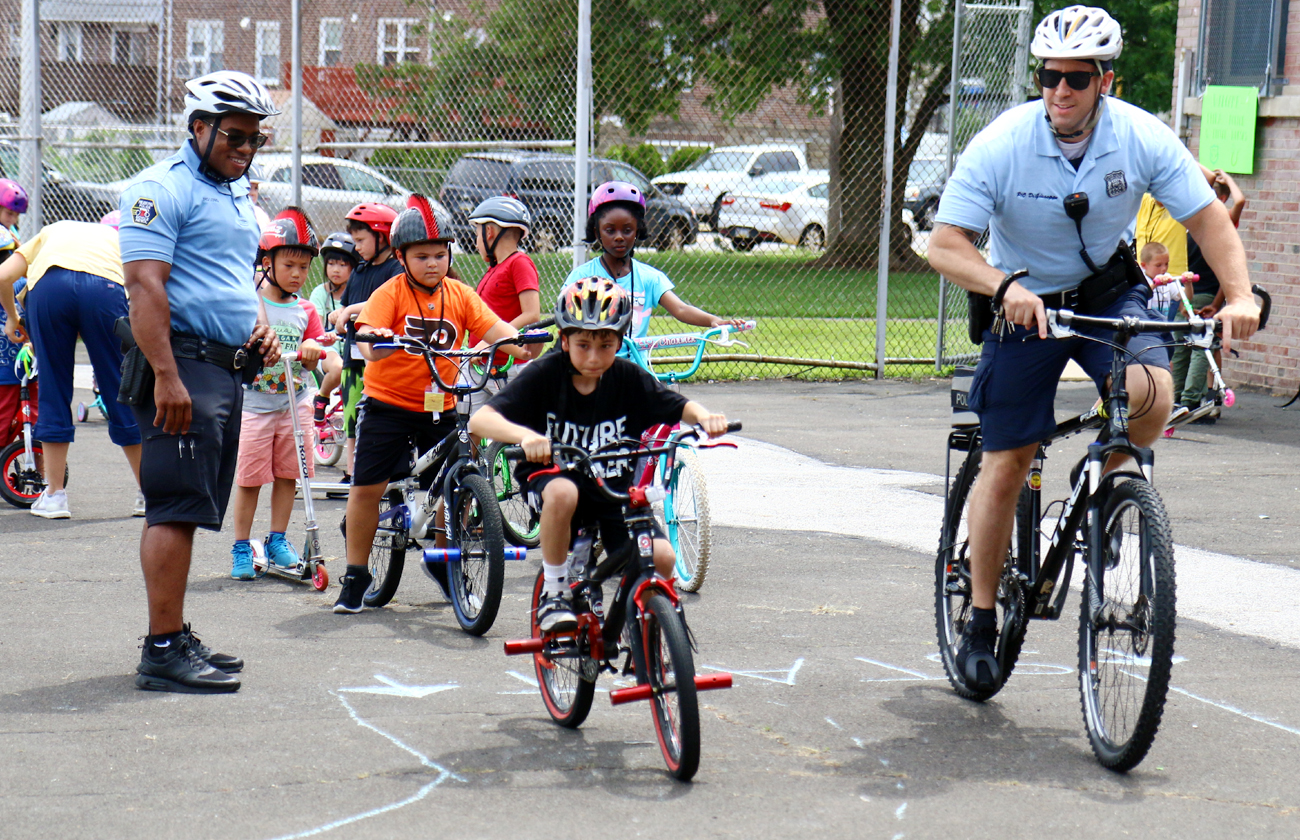 More than 50 area youth saddled up for safety, and for a new school year, at an Aug. 2 “bike rodeo.”

Now in its second year, the gathering gave kids at the Mayfair Out of School Time (OST) program in Northeast Philadelphia a chance to learn the rules of the road for two-wheeled transport.

One of nine sites operated by archdiocesan Catholic Social Services (CSS) throughout the city, the Mayfair OST provides an array of academic, recreational and social support year-round. In total, some 16,000 children benefit each year from the OST programs.

For the bike rodeo, the Mayfair OST partnered with the Philadelphia Police Department and with Drexel University’s College of Nursing and Health Programs.

Officers William DiGiuseppe and Khari Long of the police department’s 15th District were on hand to give kids an overview of the squad car, and to instruct them in best biking practices.

Helmets are “absolutely” critical to safe bicycling, DiGiuseppe said, but visibility is another major concern.

“A bike will lose against a car, 10 times out of 10,” said DiGuiseppe, an avid bicyclist and a member of Our Lady of Calvary Parish in Philadelphia. “I’m concerned about seeing older kids riding in the street in packs, doing wheelies and not paying attention, especially when drivers have gotten more aggressive over time.”

DiGiuseppe’s partner, Officer Khari Long, said that social media has fueled the tendency to “stunt in the street.”

“It promotes it and makes it more transparent, and we’re seeing it more,” he said.

DiGiuseppe and Long said that kids often transfer the fancy moves learned on bicycles to dirt bikes and four-wheelers, increasing the risk of injury or even death, and making bike safety instruction particularly timely.

Both officers also observed that not enough kids are wearing their bike helmets, something Brittany Wikiera, assistant director of the Mayfair OST site, set out to change.

Wikiera and Drexel University nursing staff personally purchased some 10 helmets for participants who did not have them.

“I know that times are tough, and some parents can’t afford to buy helmets,” said Wikiera. “And to me, these kids are like my own children.”

Wikiera also made sure that the students were geared up for class, distributing schoolbags filled with markers, crayons, folders and the like.

Although the event provided some end-of-summer fun, the bike rodeo was also a teaching moment, said Wikiera, adding that it was “absolutely amazing” to have members of the police department attend.

“We want to get this kids more involved in the community, and it was crucial to build that bond with the police,” she said.

The officers agreed, with Long noting that it was important to ensure the students were “molded into good adults, starting at a very young age while their brains are still developing.”

For DiGiuseppe, the bike rodeo – like his police work – was part of a larger mission informed by his faith.

“Being an officer, and dealing with people on a daily basis, there’s no way you can’t believe in a higher power,” he said.

Sarah Webb contributed to this report.

PREVIOUS: In Harrowgate, Catholics get their ‘fighting Irish’ up to face challenges

NEXT: Former Downingtown pastor charged with theft of parish finances