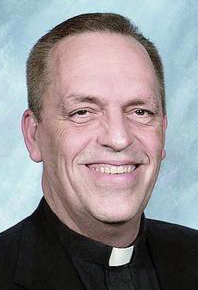 An archdiocesan priest has been placed on leave and found unsuitable for ministry because of an allegation of sexual abuse of a minor more than 45 years ago, before he began studying for the priesthood and while he himself was still a minor.

Father Christopher D. Lucas, 65, was ordained a priest for the Conventual Franciscan order in 1985 and incardinated as a priest of the Archdiocese of Philadelphia in 2002.

Since then he has served at several parishes and archdiocesan high schools, including most recently at John W. Hallahan Catholic Girls’ High Schools where he was school minister from 2005 to 2012 and again from 2013 until the present.

He also has been residing at St. John the Baptist Parish in Manayunk, Philadelphia since 2013. He also previously resided there from 2006 to 2010.

The priestly faculties of Father Lucas have been restricted, meaning he may neither exercise his ministry publicly nor present himself as a priest.

The allegation of sexual abuse was reported to the archdiocese in the fall of 2018 and forwarded immediately to a local law enforcement agency, according to a statement released by the archdiocese Sept. 15.

“It was the first allegation of this kind lodged against Father Lucas,” according to the statement.

Once the district attorney’s office, which the archdiocese did not identify, concluded its investigation and declined to press charges against Father Lucas, the archdiocesan Office of Investigations began its own probe.

The office, led by former Philadelphia First District Attorney John Delaney, then began its investigation and offered its findings to the Archdiocesan Professional Responsibilities Review Board. That panel of 12 individuals with experience in investigation, prosecution, child abuse prevention and victim services studied the case and recently made a recommendation to Archbishop Charles Chaput, according to the statement.

The archbishop accepted that recommendation and determined that Father Lucas is unsuitable for ministry based on a substantiated allegation of sexual abuse of a minor.

PREVIOUS: Do most Catholics ‘get’ social justice? Not really, say experts