Among Assisi participants, a sense of deeper crisis in modern society 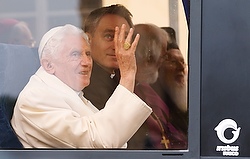 ASSISI, Italy (CNS) — A common thread ran through many of the speeches and invocations of this year’s “prayer for peace” encounter in Assisi: the uneasy sense that the world is facing not merely conflicts and wars, but a much broader crisis that affects social and cultural life in every country.

Environmental damage, the rich-poor divide, erosion of cultural traditions, terrorism and new threats to society’s weakest members were cited as increasingly worrisome developments by speakers at the interfaith gathering in the Italian pilgrimage town Oct. 27.

Pope Benedict XVI, addressing the 300 participants, echoed those points in his own analysis of the state of global peace 25 years after Blessed John Paul II convened the first Assisi meeting.

In 1986, he noted, the world was caught up not only in simmering armed conflicts but also in a cold war between two opposing blocs. Today, the Cold War is over and there is “no threat of a great war hanging over us,” but “nevertheless the world is, unfortunately, full of discord,” he said.

The Pope said this discord has taken on “new and frightening guises,” and he singled out two forms: terrorism, including acts of violence that are religiously motivated; and the spiritual erosion that has occurred in highly secularized societies.

“The worship of Mammon, possessions and power is proving to be a counter-religion, in which it is no longer man who counts but only personal advantage,” he said. He cited the illegal drug trade and drug dependency to show how desire for happiness today can degenerate into “an unbridled, inhuman craving.”

Twenty-five years ago, the success of the Assisi prayer summit was measured in part by how many warring parties respected Pope John Paul’s call for a one-day truce. In the 2011 edition, there was no truce call and no mention of specific conflicts by participants, with the exception of a brief reference to Jerusalem as a contested city.

That’s not because wars have disappeared from the horizon, but because world harmony is seen as threatened in alarming new ways:

— The growing risk of cultural conflicts was highlighted by Ja-Seung, a Korean Buddhist. Other speakers warned that globalization has sometimes prompted a backlash among those who fear the weakening of cultural identity.

— The world is ignoring massive loss of life among the poorest, said Anglican Archbishop Rowan Williams of Canterbury, making a point echoed by several leaders.

— Others said the economic crisis has placed everyone’s future under a cloud. The Rev. Olav Fykse Tveit, a Lutheran minister and secretary-general of the World Council of Churches, said that with the current high unemployment among young people, “it feels as though we are gambling with the welfare and happiness of a generation.”

— Orthodox Ecumenical Patriarch Bartholomew of Constantinople expressed concern that changes set in motion by pro-democracy movements in Arab countries may end up leaving Christian minorities less protected than before.

— Julia Kristeva, a nonbeliever and self-described humanist who was invited to Assisi, told the assembly that people’s fundamental abilities to care for each other, to raise children and to tend the land were all threatened by accelerated advances in science, the uncontrolled mechanisms of technology and finance, and the incapacity of classic democracies to deal with the results.

Several speakers warned of ecological disaster unless lifestyle changes are made. Perhaps Cardinal Peter Turkson, the head of the Pontifical Council for Justice and Peace, summed it up best when he said people’s relationship with nature was increasingly distorted.

“The strong resource competition among peoples in a climate-constrained environment threatens to dissolve the fabric of human society and devastate the very order of creation which St. Francis praised in his ‘Canticle of the Sun,'” he said.

Naturally, there were many hopeful words and prayers at Assisi to balance these rather dramatic assessments. As one pastor representing Reformed churches said at the closing ceremony that a world with more open borders, shrinking distances and better communications should make it easier for people of faith to have an impact.

But at Assisi 2011, it seemed clearer than ever that building world peace will require much more than eliminating armed conflict.

NEXT: Day of the Dead takes on new meaning amid violence in Mexico