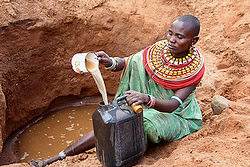 KIPSING, Kenya (CNS) — Near the southwestern edge of the vast stretch of East Africa where drought has led to famine and more than 13 million people are considered to be living in crisis, Henry Lesokoyu is the picture of hope and optimism.

A couple of feet beneath the dry surface of a seasonal river at the edge of Kipsing, precious water that normally runs off has been trapped by a series of new or rebuilt sand dams, making water accessible for the members of Lesokoyu’s Samburu tribe.

Just up a small hill at the edge of the village, Kipsing’s first gardeners tend a plot of kale and tomatoes, a move toward agriculture intended to stabilize the local economy and improve nutrition.

At one end of the dam, several young herdsmen tended their flock of camels, which nibble on trees and drink from shallow wells dug into the sand. Just below the structure, a group of young men and boys bathe in the water from another shallow well. Downstream, tracks and mounds of elephant dung were evidence of the wide variety of people, animals and birds that regularly gathered at the water source.

As the leader of this rural community and chief of his tribe, Lesokoyu has one foot in each of two very different worlds.

He keeps appointments made by cellphone and rides a motorcycle among the far-flung settlements of pastoralists — nomadic herders of goats, cattle and camels who move where the grazing takes their animals.

On this day, Lesokoyu makes the rounds of several water projects meant to bring a level of economic stability to both the pastoralists and the people who live in the village of Kipsing.

As storm clouds on the horizon signal the imminent start of Kenya’s “short rains” season, Lesokoyu proudly shows visitors the simple dams built or improved by Catholic Relief Services over the last few months. Each dam makes it possible for thousands of people to obtain water, even at the height of a drought, he says.

As part of its emergency response to the severe drought in four countries, CRS, in partnership with the Apostolic Vicariate of Isiolo, has built or rehabilitated 10 dams, five wells and one windmill. Another eight dams and wells will be built in the coming months under a CRS extension of emergency funds to the area.

The dams allow water to collect in the sand a few feet below the surface, making it easily reachable for irrigation, watering animals, drinking and cleaning. Though it is very old technology, only recently has interest in such dams revived, as an inexpensive but effective response to drought conditions.

Tom Oywa, CRS project officer based in Isiolo, said each sand dam project cost the equivalent of about $8,400, while it cost about $3,600 to rehabilitate one well.

A windmill in the community of Nakupurat, a couple hours’ drive east of Kipsing, was rebuilt for about $10,600, reopening a source of year-round water for 1,500 people of the Turkana tribe who had moved away when the mill became inoperable due to a combination of wear and tear and damage caused by elephants. Their return meant a one-room school they’d abandoned also could reopen, so children would not have to walk miles to reach another school.

In Lesokoyu’s community, a pipe from a sand dam runs to a new community garden plot. Though it had been months since the last rain of any kind and years since the last normal amount of rainfall, the acre or so of land was still producing sweet potatoes, kale and tomatoes because of the irrigation.

Oywa explained that planting crops is a new enterprise in this village, where families are normally dependent upon livestock for both food and income.

Goats are the preferred stock here, because they quickly grow to milk-producing maturity or to a large enough size to be butchered. Cattle earn a good price, but keeping them fed in drought conditions is difficult. Camels become a fallback because they handle drought well and also produce milk, Oywa explained. But camels are expensive to buy, have a long gestation period — 13-15 months — and are slow to mature.

With 6,000 people scattered across his 25 mile-long district, Lesokoyu was happy to accept the CRS offer to build up the Kipsing sand dam, making it able to hold more water. He also was pleased to accept the offer of help starting an experimental farm plot.

A year ago, Joseph Kapua was a goatherd like his ancestors. Now he’s one of the gardeners for the plot, trained in techniques by the government extension service a couple of hours away in Isiolo, the nearest city.

The effort was worthwhile for Kapua.

“I like being able to grow food for the entire family,” he said.

Megan McGlinchy, the Nairobi-based markets and urban food security adviser for CRS in East Africa, said any kind of weather stress such as reduced seasonal rains can start pastoralists or subsistence-level farmers on a spiral toward instability that is hard to reverse.

“They start by selling off their assets: their herds and then their land,” McGlinchy said. When there’s not enough food, some people head into the cities in search of work, which is hard to find. That leads some to go into illegal enterprises such as the drug or sex trades.

During crises like the current drought, agencies like CRS step in to provide emergency aid, she said.

But the preferred solution is to watch for signs of looming drought and provide “coping strategies” such as diversified sources of food and income, she explained.

Patricia Zapor was a winner of the 2011 Eileen Egan Award for Journalistic Excellence from Catholic Relief Services. She and other winners accompanied members of the CRS Baltimore staff to Kenya and Malawi in October to see some of the agency’s programs.

NEXT: Archbishop Chaput speaks to Penn for Life group