Image of Christ as Navajo shepherd among church’s distinctive features 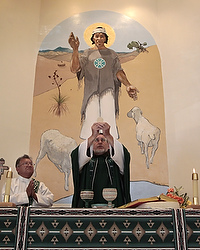 The small wood-frame building is St. Mary’s Church in Tohatchi, on the Navajo reservation.

In a front window is an image of St. Katharine Drexel, the Philadelphia heiress and founder of the Sisters of the Blessed Sacrament who devoted her inheritance and her life to ministry to Native Americans and African-Americans. 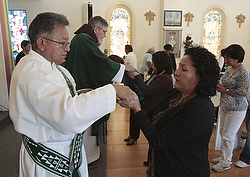 Inside, at the back of this church in the Diocese of Gallup, sitting on a small table is a black, rough-hewn bowl holding simmering cedar, its crisp aroma wafting above and past the pews.

At the front of the church, behind the altar is a larger-than-life image of Christ as a Navajo shepherd. He wears traditional dress — a deerskin shirt and breeches, with a cloth headband around his chin-length black hair. His right hand is raised. At his feet are two sheep.

The cedar, used for purification and cleansing, and this image of Christ illustrate how Navajo and Catholic traditions come together.

Cedar “harmonizes the people that are there. You have this good feeling when you walk out of the church,” Virginia Badonie, 53, told Catholic News Service in an interview in the parish hall after Mass. With her was her mother, Barbara, 74, and her father, Billy Sr., 83.

St. Mary’s is a parish that “accepts you for who you are. … It’s like a second home for a lot of us Native Americans,” said Badonie, who is Navajo and was raised a Catholic. But her parents also raised her and her siblings “traditionally and I thank my parents for that.”

There’s a natural connection between Navajo spirituality and Catholicism, said Franciscan Father Pio O’Connor, who is St. Mary’s pastor and cares for two other churches.

He celebrated Mass that morning, assisted by Deacon Marcellino Morris, who is Navajo and read the Gospel and preached in English and Navajo.

“The distinctive thing about the Navajos in general is they don’t have a separate word for religion or faith … because it’s part of their culture. They’re taught to say their prayers in the morning, as the sun’s coming up, things like that,” said Father O’Connor.

Franciscan friars who came in the 1890s to minister to the Navajo didn’t come to impose Catholic ways on the people, he said. Instead, they got to know them and understand their ways.

“They would ask the people ‘what do you believe about God?’ through translators. … And they would go visiting around. … They would talk to the people, they also started learning the language.”

Father O’Connor, ordained a priest in 1994 after 20 years as a brother, has been in Tohatchi since April. Over the years he has had assignments in New Mexico, Arizona and elsewhere.

His first time on the Navajo reservation was years ago at St. Michael’s friary in Arizona, where he worked with the now-defunct St. Michael’s Press. He made “a real connection” and “a real friendship” with the people at the time, he said, and the new assignment has brought him back to “my first love.”

And the 64-year-old priest, who chose “Pio” as his religious name, after St. Padre Pio, is learning the Navajo language.

Deacon Morris, who lives in Naschitti, chose the diaconate because he felt called to serve the tribal elders by being able to read the Gospel and preach in the Navajo language at Mass.

But ordination wasn’t on his mind when, years ago, he decided to get more involved in the Church in which he was raised and enrolled in a Jesuit-run program for Native Americans called “Builders of the New Earth” to refresh his knowledge about the Catholic faith.

“It really enlightened me more about the Church, the faith that we have and also made me appreciate our cultural values more (as a Navajo),” he said.

During the course, a nun told him he’d make a good deacon. “I kind of shrugged it off,” he said, but later thought maybe someday he would take that path but he’d choose “the timing.”

Then, on a visit to Albuquerque, he attended a Mass he didn’t expect to be celebrated only in Spanish, a language he doesn’t speak.

He entered Gallup’s diaconate program and was ordained June 2, 2001.

“I feel like I was called to minister to the elders of my people who do not speak English. … The sadness of this ministry is that a lot of them have passed on (but) I feel like they were able to be ministered to more effectively by the use of their language, and I am really grateful for that.”

Sister Marlene Kochert, a member of the Franciscans of Oldenburg, Ind., has served in Tohatchi for several years. After she arrived, once parishioners knew she planned to stick around, she felt very welcome, she said, because as the Navajo would say, “we’re all ‘five-fingered people,’ we’re all brothers and sisters.”

Sister Marlene is often invited to festivals and ceremonies, and has learned much about Navajo culture, but as she says, she won’t ever fully understand it, because “I’m always an outsider.” Their most sacred rituals are only for tribal members.

But “one thing I’d like (people) to know is the Navajo people, the Pueblos too, are spiritual people. They already knew God before any Catholics came … God the creator and the life giver, so they know God. But it’s Jesus we bring to them.”

Editor's Note: The Black and Indian Mission Office assisted CNS in setting up various interviews for this story. Information about the mission office is available at www.blackandindianmission.org.

NEXT: Speakers push for reauthorization of US religious freedom commission