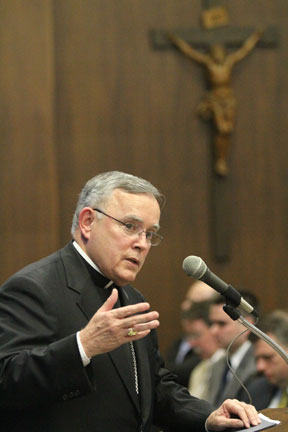 Archbishop Charles Chaput responds to questions from reporters at a press conference May 4 where he announced his decisions on eight priests who had been suspended due to past allegations of clerical misconduct or child sexual abuse.

After intensive review, eight of the 26 cases of priests placed on leave last year by Cardinal Justin Rigali following the 2011 Philadelphia grand jury report have been resolved, Archbishop Charles Chaput announced at a May 4 press conference held at the Archdiocesan Pastoral Center.

All eight priests had allegations against them of sexual abuse of minors or violations of the Archdiocese’s Standards of Ministerial Behavior and Boundaries. The Archbishop also said a number of the remaining cases should be decided within coming weeks.

“The process of reviewing these cases was designed to ensure that the decisions announced today reflect our commitment to protect children, assist victims, restore the integrity of the priesthood and provide evidence to the broader community that they can have confidence in these outcomes,” Archbishop Chaput said.

In the case of a ninth priest, Father Daniel Hoy, 89, no conclusion was reached because he died last July before an investigation could be conducted.

“No lesson from the abuse scandal is more important than the understanding that the people who suffer most are the victims,” Archbishop Chaput said. “Over the years, as part of my ministry as a bishop, I have met personally with many victims, and this humbling experience has taught me that no words can sufficiently describe the hurt a victim feels. I have in the past and again today share my deep sadness and again offer a heartfelt apology on behalf of the Archdiocese to all victims of clergy sexual abuse.”

The Archbishop, who has been in Philadelphia just eight months, said, “I’ve tried as quickly as possible to understand all of the many issues facing our local Church. During that time, preventing sexual abuse and protecting children has been and will remain a priority for me and for this Archdiocese.”

The task of investigating past allegations of sexual misconduct is complex and time-consuming, Archbishop Chaput noted.

“It cannot be hurried or abbreviated without violating the whole purpose of the review,” he said. “I should also mention that we’ve been very limited in what we can say about these cases because of current legal proceedings and the gag order put in place to protect those proceedings.”

The archdiocesan process, in the case of the 26 priests, utilizes the work of two distinct groups before a determination is made, and these groups include doctors, former police officers, former prosecutors, victims’ advocates and others with experience in the broad societal problem of sexual abuse of minors.

They were then referred to a seven-member multi-disciplinary team formed specifically for this task and headed by Gina Maisto Smith, a former child abuse prosecutor. All the members have expertise in the field. The team does not include any archdiocesan officials or attorneys who represent the Archdiocese.

After the team has thoroughly examined the cases its findings are reported to the Archbishop, who then refers the findings to the older and larger Archdiocesan Review Board. That panel has a broader constituency than Smith’s team and will continue to function even after the present 26 cases have been decided.

It is only after the Archbishop receives the recommendation of the Review Board that he makes his final decision.

Archbishop Chaput met with each of the eight priests whose cases have been decided in the days preceding the announcement, to inform them of their status. Although Father Barr was already retired, no decision has been made at this point on where priests cleared for ministry will be assigned; either to their last parish or elsewhere. The Archbishop said the preference of the priest and the desire of the parishioners will be part of the decision.

Those who were deemed unsuitable for ministry will never receive an assignment in the Philadelphia Archdiocese or elsewhere, Archbishop Chaput emphasized. They have the right to appeal the decision to the Holy See. Depending upon the substantiated allegation, if they do not appeal or if the appeal is unsuccessful, they could be laicized (removed from the clerical state), live under permanent supervision or live a life of prayer and penance.

As Archbishop Chaput explained, most of the remaining cases of the 26 are well along in the review process. Some have already received a recommendation from the multi-disciplinary team and are awaiting a final recommendation from the Review Board, after which Archbishop Chaput will make the final decision. However, six cases have not yet been cleared by the law enforcement authorities and will not be reviewed until this clearance is received. For this reason Archbishop Caput declined to give a timeline as to when the process will be completed because of the many factors involved.

Specific complaints against any of the priests were not revealed at the press conference.

“I realize that you’d like me to provide considerable detail about these cases,” he said. “That I cannot do. And I need to balance the need for transparency with the pain already felt by victims, pain which we acknowledge and do not wish to compound. It’s important for the victims themselves to control to whom, when and how extensively they disclose their accounts, and we support whatever that decision may be.”

In his remarks, Archbishop Chaput listed some of the other steps that have been taken to improve the archdiocesan response to the child abuse scandal.

“Last year, the Archdiocese removed the investigative function from our victim assistance program,” he said. “We created a separate Office for Investigations and appointed Mr. Al Toczydlowski, former Philadelphia Deputy District Attorney, as its head to ensure immediate referral to law enforcement, to ensure cooperation with county district attorney’s offices and thorough investigation so that thorough investigations can be part of the canonical process. This office uses a trained forensic interviewer to take victim statements in an effort to reduce any potential re-victimization.

“The clear division between victim assistance and investigation allows our victim assistance efforts to focus exclusively on the needs of victims. Last summer, the Archdiocese appointed Ms. Leslie Davila to head those efforts. She comes to us from the Philadelphia District Attorney’s office, and she has more than 15 years of experience in working with victims of crime, including victims of sexual assault. Ms. Davila’s office and these new practices are also now a permanent part of the Archdiocese.”

Another component discussed and equally important is the restoration of trust, in the parishes, not only those where a priest has been accused of misconduct but all parishes, because the scandal has touched all Catholics in the Archdiocese.

Toward this end a far-reaching program titled “Honesty, Healing and Hope in Christ: Confronting Sexual Violence in the Archdiocese” has been prepared, with Mary Achilles as the parish restoration project coordinator.

Both Achilles and Smith gave presentations at the press conference.

“We can’t change the past. But I pray – and I do believe – that the lessons of the last year have made our Church humbler, wiser and a more vigilant guardian of our people’s safety. That is our commitment today, tomorrow and permanently.”

NEXT: ‘Swift and transparent’ investigation leads to resolution of clergy abuses cases