Archbishop Chaput receives pallium from Pope, who calls it a tie to heaven and earth 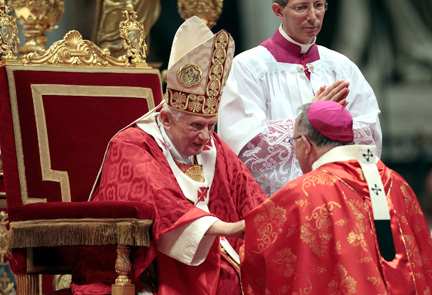 Pope Benedict XVI presents a pallium to Philadelphia Archbishop Charles J. Chaput during a Mass in St. Peter's Basilica at the Vatican June 29. The pope gave 44 archbishops the woolen pallium as a sign of their communion with him and their pastoral responsibility as shepherds. (CNS photo/Stefano Rellandini, Reuters)

VATICAN CITY (CNS) — After placing a woolen band around the shoulders of 44 new archbishops as they knelt before him, Pope Benedict XVI told them it was a reminder of their ties to heaven and earth and of their loyalty to Christ and the successor of Peter.

“You have been constituted in and for the great mystery of communion that is the church, the spiritual edifice built upon Christ as the cornerstone, while in its earthly and historical dimension, it is built on the rock of Peter,” the pope said June 29 during his homily on the feast of SS. Peter and Paul.

Before celebrating Mass in St. Peter’s Basilica, Pope Benedict gave the archbishops from 23 countries the woolen pallium as a sign of their sharing with him authority over the faithful in their archdioceses.

Two new archbishops were unable to attend the ceremony and received their palliums at home, making the final count 46 new archbishops from 24 countries, including South Korea, Pakistan and Bangladesh.

The ceremony in St. Peter’s Basilica began with a fanfare of trumpets and “Tu es Petrus” sung by the Sistine Chapel Choir and the world-renowned Westminster Abbey choir of Great Britain.

The pope invited the Anglican choir to sing with the papal choir, bringing two distinctive choral styles together at an event reaffirming papal authority and Catholic bishops’ unity with him.

Anglican Father John Hall, the dean of Westminster, said he hoped the historic visit would help the church and the Anglican Communion progress along the “long and tortuous path toward full and visible unity.”

Also present at the Mass was a delegation sent by Ecumenical Patriarch Bartholomew I of Constantinople.

The pallium ceremony saw a small but significant change this year, since it came before the start of Mass, so as to avoid interrupting the flow of the Mass or seeming to suggest that the bestowal of the pallium has the status of a sacrament.

In his homily, the pope said SS. Peter and Paul represent a “new brotherhood” in which differences can be harmonized in unity with love for Christ. That unity extends not just among Catholics, but all believers in Christ as they pursue full communion, he said.

“Together we are all cooperators of the truth, which as we know is one and symphonic, and requires from each of us and from our communities a constant commitment to conversion to the one Lord in the grace of the one Spirit,” he told the archbishops.

Speaking to Catholic News Service, the U.S. archbishops reflected on the deeper meaning of the ceremony.

Archbishop Chaput said because the pallium is a symbol of the relationship between the bishop and the pope, every time he puts it on, “I pray for the people of the Archdiocese of Philadelphia, and I also pray for the Holy Father and his associates as they serve the universal church.”

The Archdiocese of Philadelphia is facing a multimillion dollar debt and recent trials of priests on charges related to sex abuse, he said, so “there’s a lot of tension in our local church, and as the archbishop I’m carrying that tension.”

Pope Benedict “actually confirmed me, in faith and also in my work as archbishop, when he placed the pallium on my shoulders today,” Archbishop Chaput said. “So it means a lot in this difficult moment in our local church.”

Archbishop Lori, who came to Rome with nearly 100 pilgrims, said, “When we wear the woolen pallium around our neck, we are symbolizing our call and responsibility to go in search of a lost and suffering humanity and gently to lay that upon our shoulders and bring everyone as much as we can to safety and to joy, to peace, to salvation.”

Afterward, at a reception for the U.S. archbishops and well-wishers, Stanton Skerjanec, a pilgrim from Denver, told CNS he thought Archbishop Aquila would preserve the conservative values associated with his predecessor, Archbishop Chaput.

Archbishop Chaput “is one of the few outspoken bishops. He made great strides in the vocations department, in fact it was he that made me think about a vocation” to the priesthood, the 18-year-old said.

Theresa Miller, 73, of Wyndmoor, Pa., said that she and other people in the Philadelphia Archdiocese have faith that Archbishop Chaput “will straighten things out and it will all be right in the end.”

“It may hurt, but it’s necessary,” she said.

Bill McCarthy, who leads Catholic Charities in Baltimore, said the pallium ceremony showed the “universality of the church and mirrors our faith and call to service.”

He said the love he felt from the pope reminded him that “seeing love and experiencing that love is what we do every day in serving those in need.”

Contributing to this story were Francis X. Rocca and Sarah Delaney in Rome.

NEXT: School choice expands in Pa. with passage of new budget