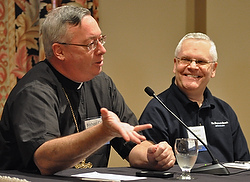 Bishop Christopher J. Coyne, apostolic administrator of the Archdiocese of Indianapolis, speaks during a panel discussion on blogging June 22 in Indianapolis at the Catholic Media Conference. Also on the panel was Deacon Greg Kandra, who is executive editor of One, the magazine of the Catholic Near East Welfare Association, and also maintains his own blog, The Deacon's Bench. (CNS photo/Sean Gallagher, The Criterion)

INDIANAPOLIS (CNS) — Blogging offers the Catholic Church one more way to evangelize for the faith while reaching new audiences, especially young people, a panel of Catholic bloggers told a packed room during the Catholic Media Conference in Indianapolis.

The panelists, which included Bishop Christopher J. Coyne, apostolic administrator of the Archdiocese of Indianapolis, a frequent user of Twitter, agreed that while not all bloggers are official Church representatives, the relatively new but quickly growing form of communication has influenced how the Church spreads its message.

They also said during the June 22 session that blogging, like any communication tool, must be used responsibly.

Elizabeth Scalia, managing editor of the Catholic portal at Patheos.com and writer of a blog named The Anchoress, said that traditional print publications, such as diocesan newspapers, with a strong Internet presence can act quickly to clarify misperceptions about the Church in the mainstream media.

She suggested that the newspaper blogs could track a story and make corrections in real time, providing an overview of an event until publication day.

While the longevity of blogs may be short-lived, Scalia said that their impact can be long term.

“Put your stuff on the Internet and for better or worse, it’s there forever,” she said. “In a way that gives the Holy Spirit some room to work. A thing you wrote three years ago and forgot about may come up in the Google search of someone who really needs to see it, and suddenly evangelization, tailor-made for that person, happens.”

Rocco Palmo, writer of the widely followed blog of Church news and rumors called Whispers in Loggia, said he began blogging in 2004 “for three readers.” Today, the cumulative hit count on Whispers is more than 23 million.

Because of the popularity of Catholic blogs, Palmo said that the Church has much to offer people involved in social media. In particular, he cited Pope Benedict XVI’s message for World Communications Day 2012, observed May 20, which emphasized the need for silence in good communications.

“It was risky because it could have been read, ‘Pope to bloggers: Shut up.’ It could have been spun that way,” Palmo said. “But it wasn’t. … It struck a nerve in our (media) inundated society about when you should turn off (digital devices). It’s important to unplug.”

The pope’s message marked one of the first times that the Church’s message about technology and society was taken up after many years of perception that the Church was behind the times, he said.

Bishop Coyne said he sees himself as a missionary on the Internet.

Although he frequently posted to his blog — online at www.thoughtsofacatholicbishop.blogspot.com — as a priest and early on after his episcopal ordination, he said he posts items less frequently in part because blogging is more of a passive medium that people must chose to visit.

“In terms of Facebook and Twitter, it’s going out,” Bishop Coyne said. “Now, granted, people have to follow you. But there is more movement (going) out there, which I think is more in keeping with (Christ’s command to) go out to all the world and spread the good news. It’s more directive from me.”

Many in the Church, including panelists in the blogging discussion, see the Internet and social media as avenues through which the Church can reach youths and young adults. Bishop Coyne suggested that Catholics can learn from some evangelical communities, which have brought youths together through social media networks.

Deacon Greg Kandra, executive editor of One magazine and writer of the blog The Deacon’s Bench, said he started blogging in 2007 because “I really did not recognize the Church that I knew in a lot of the blogs that I was reading. They were very partisan. A lot of them were angry.”

“One of the things that I wanted to impart was the idea that it’s a big church and that the body of Christ is huge,” he said. “It’s everybody from Mother Angelica to Madonna and everybody in between.”

Deacon Kandra recently decided to suspend indefinitely the ability of readers to comment on his blog posts because the comments had become “very toxic and very hateful and very argumentative.”

Nonetheless, he said, traffic to his blog has remained steady, and readers still can comment on his posts on his Facebook page. He noted that the comments were more civil because people could not do so anonymously on Facebook.

After listening to the other panelists’ remarks, Msgr. Paul Tighe, secretary of the Pontifical Council for Social Communications, said that the blogosphere is “marked by extraordinary freedom.”

“If we can go in there and keep a spirit of listening, it’s a very privileged arena for us to learn what’s going on and what people are thinking.”

The Catholic Media Conference was co-sponsored by the Catholic Press Association of the United States and Canada and the Catholic Academy of Communications Professionals.

Gallagher writes for The Criterion in Indianapolis.

NEXT: Archbishop Chaput receives pallium from Pope, who calls it a tie to heaven and earth