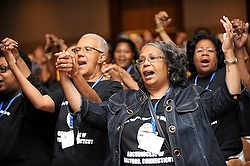 Attendees at the National Black Catholic Congress XI sing July 19 during the gathering in Indianapolis.

INDIANAPOLIS (CNS) — Hands were raised in prayer and gospel music echoed in a large ballroom at the J.W. Marriott Hotel July 19 as some 2,500 attendees from across the country gathered for the start of the National Black Catholic Congress XI in Indianapolis.

At the start of the congress’ opening general session, a roll call was taken of the dioceses across the country that were represented.

As each diocese was named, groups large and small, with many attendees wearing colorful T-shirts, stood up and cheered.

The congress in Indianapolis was the first one attended by permanent Deacon Lawrence Houston, who ministers at St. Peter Claver Parish in New Orleans.

He said his positive experience in the congress’ opening session “started with the music.”

“It just touched my spirit,” Deacon Houston said. “And just to be among so many African-Americans who know who they are as Christians and … are not afraid to let people know that we are black and we are Catholic and that there’s no separation in that, was a powerful thing.”

The congress was founded in 1889, and met several times until the late 1890s. It did not meet again until 1987 in Washington and has met every five years since then.

He spoke about the early meetings of the congress in the late 19th century, and how they discussed why black Catholics should respond to racism in the broader society, in the church and to the need for better education for their children.

“Some of those issues persist,” Father Whitt said. “Some assert themselves anew. And black Catholics must constantly and repeatedly confront them.”

He then reflected on the re-emergence of a distinctly black Catholic identity following the Second Vatican Council, especially with the U.S. black bishops issuing in 1984 the pastoral letter “What We Have Seen and Heard,” which showed that black Catholics “had come of age in the church.”

“We were authentically black,” Father Whitt said. “We were truly Catholic. And, hence, we were called to evangelization. Thus began the current era of the Black Catholic Congress.”

Father Whitt also reflected on the fact that black Catholics are a small minority within the larger black community in the U.S., making up approximately 5 percent of the black population.

He pointed to the many blessings that blacks receive through the Catholic Church, especially in the sacraments and particularly in the Eucharist.

“The sacrifice of the Mass is the highest form of worship we can offer on earth to God,” he said. “But it’s not just us on earth. When we offer unleavened bread and wine to the Father and recall the Passion and the resurrected glory of his Son, the angels fall down in awe and the saints dance for joy and sing ‘Alleluia!’ and our beloved dead shout, ‘Thank you, Jesus!'”

Father Whitt said that some in the black community wonder why black Catholics remain in the Catholic Church. He had a quick and forceful answer to such a question.

“We are the mystical body of Christ,” he shouted. “Why stay Catholic? Why in the world would we want to be anything else?”

In speaking about contemporary issues in society that affect black Catholics, Father Whitt said that laws passed some 50 years ago to protect their civil rights “are never secure” and need vigilance to protect them.

“Nevertheless,” he said, “we must express shock and, frankly, offense that, in recognizing one right, the government tries to deny us the right to freely practice our religion in accord with its moral teachings.”

“We’ve got a couple of generations of Catholics who don’t know the simplest things (about their faith),” he said. “And it’s really hard to love what you don’t know.”

After Father Whitt’s presentation, congress participant Vicki Lott of the Diocese of Austin, Texas, said that she likes attending the congresses to share fellowship with black Catholics from across the country that have both enjoyed the blessings of the Catholic faith, but also suffered from racism of some members of the church.

Lott said there have been occasions when she has offered her hand at the sign of peace at Mass only to have other people turn their back on her.

“I thought I was the only one who had experienced that,” Lott told The Criterion, newspaper of the Indianapolis Archdiocese. “It’s gotten much, much better in the past 10 years in my opinion. But it’s good to know that I wasn’t experiencing that pain alone.

“I also learned that maybe some of it was me. Maybe I should do more to reach out, to be more proactive.”

Ajani Gibson came to the congress from his home in New Orleans. He will be a sophomore at the Catholic University of America in Washington this fall, where he is majoring in philosophy.

“It’s always a positive aspect to see so many black Catholics come to celebrate and to worship,” Gibson said. “It gives me hope because I see so many young people.”

He agreed with Father Whitt’s assessment that black Catholic youths and young adults need to have their Catholic identity strengthened. He hoped to contribute to that effort by serving as a speaker to young people in sessions at the congress on social media and the new evangelization and on spirituality for young men.

“We need to focus on getting our young people into church,” Gibson said.