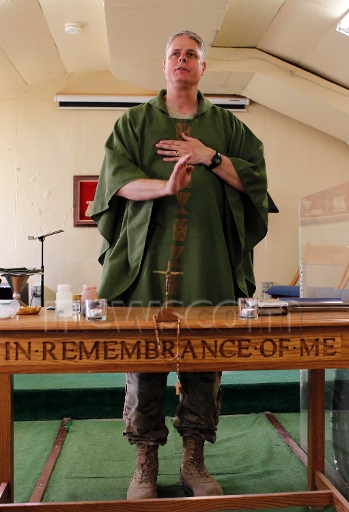 ANCHORAGE, Alaska (CNS) — While they work to defend the U.S. Constitution, some Catholic military chaplains feel that their First Amendment right to the “free exercise” of religion has been called into question.

“Many have sacrificed their lives for our freedoms, and of course among the first and the founding freedoms of our country was that of religious liberty,” said Auxiliary Bishop Neal J. Buckon of the U.S. Archdiocese for the Military Services.

“Does a service member have to forfeit their constitutional right when they put on the uniform?” he asked during an interview with the Catholic Anchor, newspaper of the Anchorage Archdiocese.

Bishop Buckon was in Alaska recently to visit Joint Base Elmendorf-Richardson near Anchorage.

Two recent incidents have prompted concerns among Catholic chaplains and those of other faiths.

In late January, a directive was issued — and later rescinded — by the U.S. Army chief of chaplains that said a letter from Archbishop Timothy P. Broglio, head of the military archdiocese, which opposed the Obama administration’s contraceptive health care mandate, could not be read from the pulpit by Catholic military chaplains.

Last October, the Pentagon issued a memo allowing military chaplains to participate in or officiate at same-sex marriages on or off military installations. The memo stated no chaplain would be required to do so if it “would be in variance with the tenets of his or her religion,” but religious leaders say questions remain over conscience protections for military members and chaplains.

About 24 percent of military men and women are Catholic, and priest chaplains long have been by their sides on battlefields and in field hospitals, celebrating Mass and administering the sacrament of the sick to the dying.

“They’re very brave, they’re very heroic. They go where the service members go, and that is oftentimes, in harm’s way,” explained Bishop Buckon, who is himself a retired, decorated career Army officer and former field chaplain.

The bishop is the military archdiocese’s episcopal vicar for the western half of the United States — including Alaska. The archdiocese, based in Washington, provides pastoral care and spiritual services to military members and their families, veterans and federal employees around the globe.

The military archdiocese does not ordain priests but utilizes priests on loan from their home dioceses or religious orders. The military commissions the priests — along with chaplains of other denominations — as officers in the chaplain corps.

There are 230 Catholic priest chaplains and 1.5 million Catholics in the military. So each priest chaplain is “oftentimes doing the work of three,” Bishop Buckon noted.

In January, when the Army’s chaplains chief initially prohibited Catholic chaplains from reading Archbishop Broglio’s letter against the contraceptive mandate to their Catholic congregants, the move was widely seen as an infringement of the religious freedom of military bishops and chaplains to teach the faithful.

Like his fellow bishops across the country, Archbishop Broglio urged Catholics in his archdiocese to oppose the federal mandate forcing private employers — including most Catholic organizations — to provide free coverage of contraceptives, sterilizations and abortion-causing drugs in employee health plans even though that contravenes Catholic moral teaching.

“We cannot — we will not — comply with this unjust law,” Archbishop Broglio wrote of the mandate. “People of faith cannot be made second-class citizens.”

The letter urged Catholics to pray and fast “that wisdom and justice may prevail, and religious liberty may be restored,” and to contact their congressional representatives to support legislation to reverse the mandate.

According to the bishops, the issue of silencing military chaplains should have been resolved years ago. In 1997 a federal court ruled that such a “gag order” interferes with the rights of military chaplains to religious freedom and speech, as well as those of their congregants.

The situation was quickly resolved after Archbishop Broglio met with Army Secretary John McHugh. Both leaders agreed it was a mistake to stop the reading of the letter, and the directive was rescinded. Before the letter was redistributed, though, they also agreed the reference to noncompliance “with this unjust law” had to be removed lest it be seen as promoting civil disobedience.

But concerns remain over the Department of Defense memo allowing military chaplains to officiate at same-sex unions on or off military installations.

In response, lawmakers in Washington added a provision to the bill that authorizes defense expenditures for next year that specifically states that officers may not order military chaplains to perform same-sex “marriages” or punish them for declining to do so. Another section aims to reverse the Pentagon rule allowing same-sex “marriage” ceremonies on military bases.

But the Obama administration issued a statement in May saying it opposes the conscience-protecting measures, calling them “unnecessary and ill-advised.”

The House passed its version of the 2013 National Defense Authorization Act May 18; the full Senate has yet to act on its version.

“It’s a clash of values,” said Bishop Buckon, who suggested the Obama administration is advancing certain secularist values. “And we find some of these values to be at odds with our Christian faith.”

Since U.S. servicemen and women face spiritual dangers every day, military chaplains need to be free to care for them, Bishop Buckon believes.

“People that find themselves going into combat are thinking of the eternal verities,” he said.

Recalling his time in Iraq, the bishop continued: “The guys — they’d be on their Humvees, behind their guns and they’re ready to go out the gate — and I’ll ask them, ‘How’s your prayer life?’ And their response would be, ‘Chaplain, I’m praying every day’ — because they are in harm’s way and they know this is a dangerous situation and they have the difficult decisions to make that could mean the difference between life and death.”

He stressed that military men and women are professionals who strive to make the right decisions in battle. But that’s not always easy, he said, because “war is just not a clean thing.”

“If they make a decision that results in someone’s death or physical harm or wounding, they don’t take that lightly. They wrestle with it,” he explained.

Coll Freeman writes for the Catholic Anchor in Anchorage.

PREVIOUS: Congressional plan to cut $16B in food aid called ‘unjustified and wrong’

NEXT: New profession of faith seen as ‘public way of witnessing’ to beliefs