Prayers for rain, or no more of it: U.S. grapples with drought while Ireland, India suffer from flooding 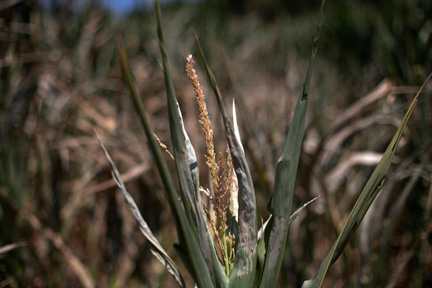 In the Midwest United States, high temperatures and the worst drought in decades are stunting crops and moving Catholics to pray for rain. But Catholic communities in Ireland and India are praying for just the opposite. In those countries heavy rains are flooding farm fields and homes.

The desperation of drought-stricken farmers in the Midwest was evidenced by what topped Mary Margaret O’Connor’s “day’s best memory” list as the July 8 celebration of her parish church’s centennial came to a close.

“It looks like we’re going to get rain,” said O’Connor, eyeing dark clouds approaching the grounds of St. Boniface Church in Seymour, Ill., where a tent had been erected for a parish luncheon.

Prayers to keep rain away from an outdoor parish celebration months in the planning and including a visit from the diocesan bishop — Peoria Bishop Daniel R. Jenky — would usually be the norm. But not this summer at St. Boniface Church, a Catholic landmark rising above fertile corn and bean fields in Illinois.

As in much of the Midwest, farmers in Seymour are on the edge of disaster from scorching heat and lack of rain.

“Hopefully, it will come,” Father Robert Lampitt, parochial vicar of the rural parish, said of the rain before leading the meal blessing.

“It would be a godsend,” agreed Bill Klein, a fourth-generation farmer whose great uncle willed the rural parish an 80-acre tract of land upon his death in 1954. The field north of the church is planted in soybeans this year.

Klein, O’Connor and other farmers of St. Boniface Parish compared the current drought to one in 1988. The region is 10 inches or more below normal rainfall for the year. What rain comes now may already be too late for some corn crops but would be greatly benefit soybeans.

As of early July, about 60 percent of U.S. corn acreage was experiencing moderate to extreme drought, up from 49 percent a week earlier, according to the U.S. Department of Agriculture.

“This (drought) is one of those events that supposedly comes along once in a lifetime,” said Klein, whose two sons also farm. “I’ve seen four,” he added, though Klein claimed the fields around St. Boniface Church often seem to get rains that may miss other areas.

Farming brothers Bernie and Greg Magsamen, who served as ushers for the centennial celebration, were among those involved in restoring and painting a century-old bell and building its new brick housing. The refurbished bell, taken down three years ago, was named St. Isidore after the patron saint of farmers by a vote of parishioners.

His brother kept an eye on the sky, hoping for what he called “a million-dollar rain” and acknowledging there is little that a farmer can do without needed moisture.

“We’re at the mercy of the Lord,” said Bernie.

The rain did come down near the end of the afternoon, but the scattered showers totaled just one-tenth of an inch; areas north of St. Boniface received up to an inch.

The Associated Press reported that in some places in southern Illinois, farmers started mowing down their corn fields — the cobs had no kernels growing on them — and baling the dried and withered stalks to feed as hay to their animals. Rainfall had totaled less than one inch since late April in some parts of southern Illinois.

Meanwhile an ocean away in Ireland, a bishop has appealed to parishioners to pray for a break in the rain.

Bishop Denis Brennan of Ferns asked local churches to offer prayers for farming families struggling under a severe loss of income due to the weather conditions.

The Irish Farmers’ Association warned that farm families across the country have been hit by a loss of 100 million euros due to higher feed costs and a loss of output as a result of the poor weather conditions.

Bishop Brennan said many farming families in the area are “experiencing real strain and anxiety as they grapple with the prospect of a continuation of the current poor spell and its threatened adverse effects on the annual harvest.”

He also expressed the fear that the poor weather could hinder the wider national economic recovery.

Bishop Brennan said many parishes in his diocese have received requests for prayers for fine weather.

“In truth, they range from the very heartfelt of the farming community to those of parents whose children are looking to get outdoors and enjoy the best of the summer holidays,” he told Catholic News Service.

“Our real thoughts and prayers are with the farming community at this time. I am very conscious of the vital role it plays in our society and our economy. This persistently poor weather is a real threat to crops and livelihoods — and it now spells extra animal feed costs,” Bishop Brennan said.

While summers in Ireland are generally damp, this year has proved to be particularly wet. Nine inches of rain — nearly three times the average — fell in the month of June. June had only 93 hours of sunshine, scarcely half of the monthly average. It was the wettest June since records began in 1910.

Farmers warn that this year’s harvest will be ruined unless the bad weather breaks soon.

Forecasters say there is little chance of an improved outlook, with more rain predicted.

The problem of too much rain is far worse in India.

“The situation is still very grim, and over 70 percent of the affected families have no access to their villages,” Father Theodore Purthy, director of the Tezpur Diocese’s social service agency, told Catholic News Service July 12.

“Many villages are still under water, and houses along with the possessions — including cattle — have been washed away,” Father Purthy said as he returned to his base from remote villages to assess damage and to map out the church’s rehabilitation program for those affected.

“These villages remain marooned and inaccessible as even roads have been washed away,” said Father Purthy.

Heavy monsoon rains in late June, along with floodwaters from Bhutan, have inundated thousands of villages and submerged roads and towns in 23 of 27 districts of Assam state, which is traversed by the Brahmaputra River.

Babita Alick, team leader for disaster management of Caritas India, the social action wing of the Indian church, told Catholic News Service that three medical teams led by doctors have been reaching out to villagers sheltered in relief camps run by the government in schools and other centers.

“The conditions in the relief camps are appalling. Women, children and cattle are jostling for space in the camps. There is hardly any toilet facility in the camps with over 2,000 people,” Alick said from New Delhi after visiting the flood-affected areas.

“Medical attention is the greatest necessity, with dead carcasses of cattle floating around and acute shortages of drinking water. Thousands are camping on roadsides as entire villages have been under water,” Alick said.

CRS is involving trainees and beneficiaries of the Community-based Disaster Risk Reduction program it had already started in some of the flood-affected villages.

“We are planning for long-term rehabilitation programs as the lives of the villagers have been ruined and they are in no-man’s land,” Rekha Shetty, who works in disaster management for CRS, told Catholic News Service after visiting marooned villages by boat.

By Tom Dermody, editor of The Catholic Post of the Peoria Diocese; Mark Pattison of CNS in Washington; Michael Kelly in Ireland; and Anto Akkara in India.

PREVIOUS: Trouble for Church in China: One Chinese bishop ordained without Pope’s approval is excommunicated, while a validly ordained bishop faces government restrictions