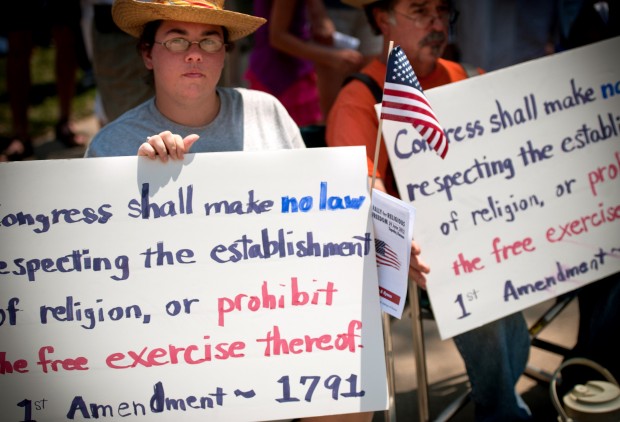 WASHINGTON (CNS) — Over the past several months, the U.S. Catholic bishops and other religious leaders have urged Americans to defend religious liberty in the United States in the face of what they see as threats to that freedom.

And the issue continues to gain momentum as the November election draws near.

It has been at the forefront for the Catholic bishops since the U.S. Department of Health and Human Services announced in January that it would require most religious employers to provide free contraceptive coverage against their moral objections. The bishops have repeatedly described the mandate, which violates church teaching, as a restriction on religious liberty.

Theologians and Catholic leaders discussed the issue of religious freedom at recent seminars at The Catholic University of America and Georgetown University in Washington and a forum at St. John's University in New York.

At both of the national political conventions this summer, Cardinal Timothy M. Dolan of New York, president of the U.S. Conference of Catholic Bishops, mentioned religious liberty in his closing prayers.

At the close of the Republican National Convention Aug. 30 in Tampa, Fla., he gave thanks for the “singular gift of liberty” and prayed for a renewed “respect for religious freedom” and a “new sense of responsibility for freedom's cause.”

During a closing benediction Sept. 6 at the Democratic National Convention in Charlotte, N.C., the cardinal prayed that God would “renew in all our people a profound respect for religious liberty: the first, most cherished freedom bequeathed upon us at our founding.”

In April, the U.S. bishops' Ad Hoc Committee on Religious Freedom issued a 12-page statement on threats to religious liberty, including the HHS mandate but highlighting other examples:

— Immigration laws in Alabama and other states that “forbid what the government deems 'harboring' of undocumented immigrants.”

— Government actions in Boston, San Francisco, the District of Columbia and the state of Illinois that have “driven local Catholic Charities out of the business of providing adoption or foster care services” because the agencies would not place children with same-sex or unmarried heterosexual couples.

— Changes in federal contracts for human trafficking grants that require the U.S. bishops' Migration and Refugee Services to refer clients “for contraceptive and abortion services in violation of Catholic teaching.”

On the state level, ballot measures dealing with religious freedom protections have emerged in North Dakota, Missouri and Florida.

In North Dakota's June primary election, voters ultimately rejected a ballot measure to broaden state constitutional religious freedom provisions. Meanwhile, Missouri voters in their August primary approved a similar measure that guaranteed people could pray and worship in all private and public areas including schools as long as the activities are voluntary and subject to the same rules and regulations that apply to all other types of speech.

Missouri legislators voted to override the governor's veto of a religious liberty bill specifying that no one should be forced to pay for abortion drugs and similar items in their health insurance when it violates their religious beliefs.

The Missouri law addresses the federal contraception mandate that became effective Aug. 1. The Missouri Catholic Conference noted that federal law supersedes state law. However, several lawsuits challenging the HHS mandate as unconstitutional have been filed in various federal courts, and if the mandate is ultimately found to be unconstitutional, the new Missouri law will stand.

In November, Florida will vote on a constitutional amendment to prohibit discrimination against individuals and institutions on the basis of religious beliefs and remove a long-standing ban on public funding “in aid of any church, sect, or religious denomination or in aid of any sectarian institution.”

Supporters of the amendment say it is necessary to ensure that social service organizations with religious affiliations can compete on an equal footing with other organizations providing similar services. Opponents have argued the amendment is an attempt to lay the groundwork for Catholic school vouchers when faith-based organizations already receive government funding for public services they provide.

Both political parties mention religious liberty in their platforms. The Democratic Party platform states the Affordable Care Act “ensures that women have access to contraception in their health insurance plans,” adding that President Barack Obama “has respected the principle of religious liberty.”

The HHS mandate does have a religious exemption, but its critics say it is so narrow it would protect only those religious employers who seek to inculcate their religion and who primarily employ and serve people of their own faith.

The GOP platform uses the phrase “war on religion” to describe the Obama administration's “attempt to compel faith-related institutions, as well as believing individuals, to contravene their deeply held religious, moral, or ethical beliefs regarding health services, traditional marriage, or abortion.”

The U.S. Catholic bishops, in their document “Forming Consciences for Faithful Citizenship” — which outlines church teaching on contemporary issues for Catholic voters — speaks broadly on the issue of religious freedom by stating: “U.S. policy should promote religious liberty and other basic human rights.”

The broader implications of religious freedom were addressed by Pope Benedict XVI in his mid-September visit to Lebanon, where he called religious freedom a basic human right and a prerequisite for social harmony.

The pope said peace requires a pluralistic society based on “mutual respect, a desire to know the other and continuous dialogue.” He also said “religious freedom is the basic right on which many rights depend.”

At a Sept. 12 forum at Catholic University on what the Catholic Church can do to defend religious freedom abroad, Cardinal Dolan stressed the urgency of the issue.

“Many need to be respectful of other religious traditions at the same time that we unequivocally proclaim that violence — violence in the name of religion — is the ultimate oxymoron,” he said.

NEXT: Presidential candidates on opposite sides of the abortion issue