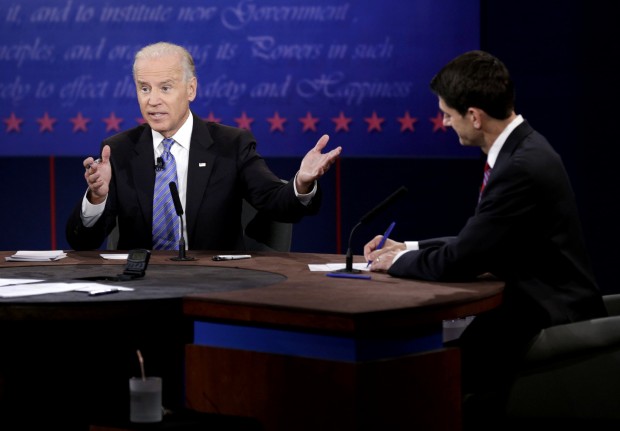 Among other topics, the debate touched on the issue of the U.S. Department of Health and Human Services’ regulations that would force virtually all employers to include sterilization and contraception, including drugs that may cause abortion, in the health insurance coverage they provide their employees.

The bishops conference disputed that line in a statement Oct. 12, saying, “This is not a fact. The HHS mandate contains a narrow, four-part exemption for certain ‘religious employers.’ That exemption was made final in February and does not extend to ‘Catholic social services, Georgetown hospital, Mercy hospital, any hospital,’ or any other religious charity that offers its services to all, regardless of the faith of those served.

“HHS has proposed an additional ‘accommodation’ for religious organizations like these, which HHS itself describes as ‘non-exempt.’ That proposal does not even potentially relieve these organizations from the obligation ‘to pay for contraception’ and ‘to be a vehicle to get contraception.’ They will have to serve as a vehicle, because they will still be forced to provide their employees with health coverage, and that coverage will still have to include sterilization, contraception, and abortifacients. They will have to pay for these things, because the premiums that the organizations (and their employees) are required to pay will still be applied, along with other funds, to cover the cost of these drugs and surgeries.”

The USCCB said it continues to urge HHS “in the strongest possible terms, actually to eliminate the various infringements on religious freedom imposed by the mandate.”

In its statement the USCCB said it had filed regulatory comments with the HHS May 15 regarding the proposed accommodation.