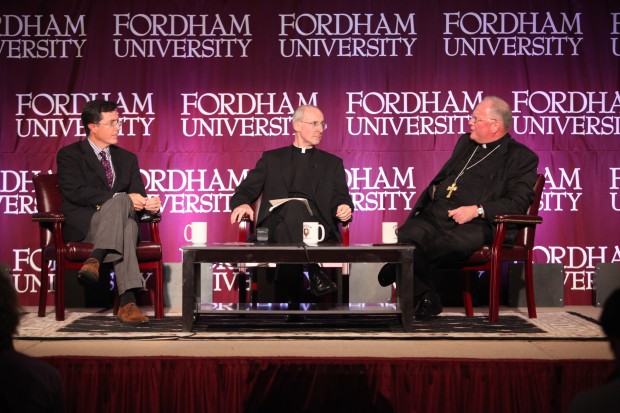 The session was moderated by Jesuit Father James Martin, author of “The Jesuit Guide to Nearly Everything” and “Between Heaven and Mirth.” He is the official chaplain of Colbert’s show as well as culture editor at the Jesuits’ America magazine.

Colbert is host of “The Colbert Report,” a pseudo-archconservative, faux news show. An active Catholic who teaches religious instruction to children in his parish, he said comedians often don’t understand how he could remain Catholic.

Instead, Colbert explained that he sees the Catholic Church as teaching joy, which he called the “infallible sign of the presence of God.”

Though the comedian maintains his television persona nearly all the time in front of the camera and in public interviews away from the show, in a rare moment, he slipped out of character, admitting to the nearly exclusively student audience at the Jesuit university that he loves the Catholic Church despite its human flaws. “I love my church — warts and all,” he said.

When Cardinal Dolan, who is known for his own gregarious sense of humor, took the stage, it was he who bowed and kissed Colbert’s ring. This set the tone for the rest of the high-energy and frolicsome evening.

As he was introduced, there was a reference to him being on the list of “papabili,” or future pope. “If I am elected pope, which is probably the greatest gag all evening, I’ll be Stephen III,” Cardinal Dolan joked.

In his remarks, which he later posted on his blog, “The Gospel in the Digital Age,” the cardinal told Colbert he doesn’t often have a chance to watch his show but knows his nieces “are certainly among your legion of fans.”

He remarked he would keep his comments short, because Father Martin “has given me only 10 minutes — which could be the best joke of the evening, to think that a bishop would be so brief.”

Striking a serious note, he told Colbert, “Part of my admiration for you is that, while you often tease and joke about your faith, and the church, there’s no denying that you take your faith seriously, and look to the church as your spiritual family.”

Cardinal Dolan said his assignment was to share “what you might call the theological reasons for laughter. Why would a person of faith be cheerful? Why is a crabby believer a contradiction?”

“Here’s my reason for joy: the cross. You heard me right: the cross of Christ!” he said.

When Jesus was crucified “on that Friday strangely called ‘Good,’ literally the ‘lights went out’ as even the sun hid in shame. … Jesus, pure goodness, seemed bullied to death by undiluted evil; love, jackbooted by hate; … life itself, crushed by death. It seemed we could never smile again.”

But then came “the Sunday called Easter,” the Son “rose from the dead” and God had the last word, Cardinal Dolan said. “Hope, not despair; faith, not doubt; love, not spite; light, not an eclipse of the sun; life, not the abyss of death.”

“‘He who laughs last, laughs best,'” he added. “And we believers have never stopped smiling since that resurrection of Jesus from the dead!”

“Lord knows there are plenty of Good Fridays in our lives … but they will not prevail,” he said. “Easter will. As we Irish claim, “Life is all about loving, living, and laughing, not about hating, dying, and moaning.”

In his remarks Colbert said, “If Jesus doesn’t have a sense of humor, I’m in huge trouble.”

He said that though some comedians make jokes at the expense of religion, specifically Christianity, Colbert explained he only makes jokes about what he called “people’s misuse of religion” in politics and other arenas.

As part of the performance/discussion, Colbert joked with Cardinal Dolan about the new English translation of the Roman Missal, implemented last fall, calling the language stilted and overly formal.

He pointed out the translation of the Nicene Creed in which the phrase “one in being with the Father” was replaced with “consubstantial with the Father.”

After the presentation, Father Martin said in an interview that the evening at Fordham “wildly exceeded anyone’s expectations. It was truly a once-in-a-lifetime event, and I think that the crowd sensed that as soon as the two men walked out on stage.”

“I thought that the energy of those 3,000 students was going to lift the roof off of the Fordham gym.”

Afterward several students remarked they were especially moved that Colbert and Cardinal Dolan were honest and open about their deep love for the Catholic faith.

Father Martin added that toward the end of the evening, as Fordham’s president, Jesuit Father Joseph McShane, “was thanking Mr. Colbert, the cardinal leaned over to me and said, ‘This is the new evangelization.’ Amen to that.”