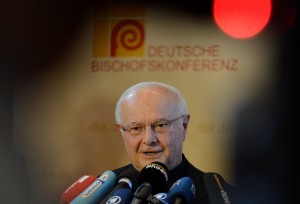 Archbishop Robert Zollitsch of Freiburg, president of the German bishops' conference, presents a statement to the media at the opening of the bishops' fall meeting Sept. 24 in Fulda, Germany. The German bishops' conference defended its controversial decree that said Catholics who stop paying a church membership tax cannot receive sacraments. Introduced in the 19th century, the membership tax earns the German church about $6 billion annually. (CNS photo/KNA-Bild)

“There must be consequences for people who distance themselves from the church by a public act,” said Archbishop Robert Zollitsch of Freiburg, conference president, in defending the Sept. 20 decree.

“Clearly, someone withdrawing from the church can no longer take advantage of the system like someone who remains a member,” he said at a Sept. 24 news conference as the bishops began a four-day meeting in Fulda. “We are grateful Rome has given completely clear approval to our stance.”

The archbishop said each departure was “painful for the church,” adding that bishops feared many Catholics were unaware of the consequences and would be “open to other solutions.”

“The Catholic church is committed to seeking out every lost person,” said Archbishop Zollitsch, whose remarks were reported by Germany’s Die Welt daily.

“At issue, however, is the credibility of the church’s sacramental nature. One cannot be half a member or only partly a member. Either one belongs and commits, or one renounces this,” Archbishop Zollitsch said.

Catholics make up 30 percent of Germany’s population of 82.3 million, about the same proportion as Protestants, with 2 percent belonging to Orthodox denominations, according to government figures.

Interest in the Catholic Church revived after German-born Pope Benedict XVI’s April 2005 election, but church baptisms and weddings continue to decline. Church statistics show that about 13 percent of Catholics attend Mass weekly, compared with 22 percent in 1989.

Germany’s Catholic priesthood and religious orders also are declining in number, according to a bishops’ statement in June, despite three homecoming visits by Pope Benedict since his election.

A total of 126,488 Catholics asked to stop paying the membership tax and be removed from registers in the 27 German dioceses during 2011, according to the bishops’ conference. In 2010, some 180,000 Catholics took the same step.

German newspapers said the pope’s native Bavaria region had suffered the worst losses. The dioceses of Augsburg, Bamberg, Eichstatt, Passau and Wurzburg reported a 70 percent increase in departures in 2010, the height of the clergy sexual abuse scandal.

Introduced in the 19th century, the membership tax earns the German church about $6 billion annually, making it one of the world’s wealthiest.

In its decree, the bishops’ conference said the tax was designed to compensate for state seizures of church property. The decree said the right to a “civil law withdrawal” ensured “no one is led to church membership against their will.”

“Conscious dissociation from the church by public act is a grave offense against the church community,” the decree said.

“Whoever declares their withdrawal for whatever reason before the responsible civil authority always violates their duty to preserve a link with the church, as well as their duty to make a financial contribution so the church can fulfill its tasks.”

The document added that departing Catholics could no longer receive the sacraments of penance, holy Communion, confirmation or anointing of the sick, other than when facing death, or exercise any church function, including belonging to parish councils or acting as godparents.

Marriages would granted only by a bishop’s consent and unrepentant Catholics would be denied church funerals, the decree said.

A press release Sept. 20 said the decree had been approved in August by the Vatican’s Congregation for Bishops. It added that parish priests would be asked to write to departing Catholics, inviting them to meet and explain their decision and have the consequences explained.

The Associated Press reported that the Federal Administrative Court in Leipzig, Germany, ruled Sept. 26 that Catholics who opt out of paying religious taxes must automatically leave the church as well.

The bishops’ decree was criticized by Germany’s dissenting We are Church movement, which said in a statement Sept. 24 that a “pay to pray” policy sent “the totally wrong signal at the wrong time” when the German bishops were “laboriously trying to regain credibility” after a “decades-long cover-up of abuse scandals.”

“Instead of considering the reasons why large numbers are leaving the church on the ground, this bishops’ decree sends a threatening message,” the statement said.

“This threatened exclusion from community life is a de facto excommunication. It contradicts the sacramental understanding of indelible church membership through baptism.”

In his Sept. 24 opening address to the bishops’ meeting, Archbishop Zollitsch said the church needed “a long perspective, deep breath and patience” to cope with current challenges, as well as a capacity for dialogue with “social groups and circles alienated from the church.”

NEXT: Pope names record number of women to Synod on Evangelization