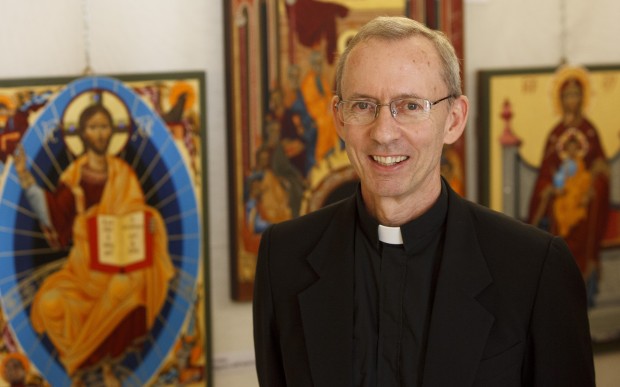 Holy Cross Father James Phalan, president of the Mariological Society of America and director of Family Rosary International, is pictured at a Marian conference in Rome Sept. 6. Father Phalan said that devotion to Mary "collapsed" in some parts of the United States after the Second Vatican Council even though council participants had upheld her critical place within the Catholic faith. (CNS photo/Paul Haring)

VATICAN CITY (CNS) — Devotion to Mary “collapsed” in some parts of the United States after the Second Vatican Council even though the council fathers had upheld her critical place within the Catholic faith, said a leading American expert in Marian studies.

The council’s decision to integrate a draft text on Mary into a larger dogmatic text — “Lumen Gentium” — rather than publish it as a separate document — sent an unintended message to the rest of the church, Holy Cross Father James Phalan, president of the Mariological Society of America, said in a presentation at an academic conference in Rome. (See a video of Father Phelan’s presentation.)

Even though bishops felt Mariology, like the Church as a whole, needed to be renewed in light of tradition, liturgy and the Bible, later an “overly rationalist” historical approach reduced the role of the Holy Spirit and marginalized most forms of devotion, Father Phalan said.

Worsening the problem, he said, was the timing: post-Vatican II coincided with the upheaval of the 1970s when religious traditions and beliefs were being intensely questioned or completely dismissed by society.

Marian devotion “was caught up in this confusion” and there was a drop-off in practice and study, he said.

“The apparent change in emphasis on the Blessed Virgin contributed to a full-scale collapse of Mariology that has had very notable effects on the life of the Church,” he said in his talk on “Mary and the Second Vatican Council.”

Father Phalan, who is also director of Family Rosary International, was one of the scholars, experts and theologians speaking at the 23rd Mariological Marian International Congress held in Rome Sept. 4-9.

The council fathers had drawn up what Father Phalan called “the most complete and conclusive doctrinal statement about the Blessed Virgin Mary ever written” and made it the final chapter of the 1964 Dogmatic Constitution on the Church (“Lumen Gentium”).

“The council fathers wanted us to see Mary as identified with the church,” a notion Pope Benedict XVI has often repeated, saying that Mary, as a personification of the church, should be appreciated and imitated in her contemplative and personal relationship with Christ, Father Phalan said.

Cardinal Angelo Amato, president of the congress and prefect of the Congregation for Saints’ Causes, said Vatican II was a “momentous watershed moment for Marian discourse” — steering it away from “every undeserved doctrinal and devotional exaggeration,” which would put Mary on equal ground with the Lord. Rather, it upheld her unique, yet human role in God’s plan of salvation; she is “the living vessel who, in receiving, transmits the salvation of Christ,” he said.

The church teaches that salvation only comes from God in Jesus Christ, he said, but the human being must still be open and receptive to that grace. Any sense of Mary being “co-redeemer” must be understood as cooperating “with,” not being “equal to” Jesus, because God the father generates salvation and Mary, the mother, is the recipient of that gift.

“This is the theological reason to affirm the reality of Mary and the ‘Marian principle’ in the church,” the Italian cardinal said.

While popular piety may have suffered in some parts of the West, Cardinal Amato said Popes Paul VI, John Paul II and Benedict did much to enrich and invigorate Marian reflection and tradition.

Pope Benedict has promoted attachment to Mary as a way for the faithful to draw closer to Christ. While Catholics must not exaggerate or over-sentimentalize her role, he told pilgrims at the Mariazell shrine in Austria in 2007, Mary “is a creature of courage and of obedience … an example to which every Christian — man and woman — can and should look.

In light of the upcoming Year of Faith and the call for new evangelization, Mary can again play a critical role, Father Phalan said.

“She was the first evangelist,” showing Jesus to the world, starting with the shepherds and wise men. And she is a model for all Christians in understanding what faith is and how to accept and participate in salvation, Father Phalan said.

Given the troubled world of today, he said, “the love and mercy of God that flow through Mary” must be “even more present as part of evangelization today.”

PREVIOUS: Link between power, abuse in Church, examined by conference