Pope Benedict arrives in Lebanon as ‘pilgrim of peace’ 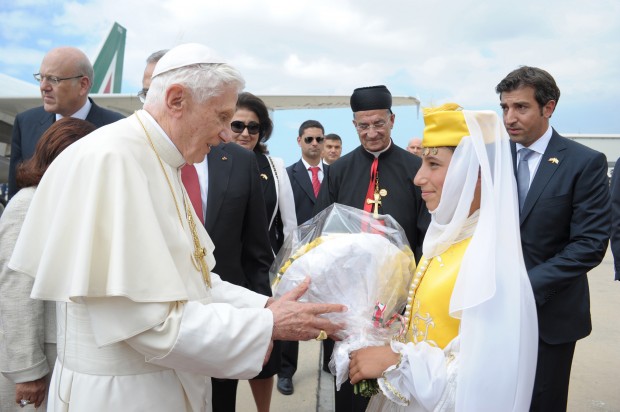 Pope Benedict is presented with a gift as he arrives at Rafiq Hariri International Airport in Beirut Sept. 14 to begin his three-day visit to Lebanon. (CNS photo/L'Osservatore Romano via Catholic Press Photo)

BEIRUT (CNS) — Pope Benedict XVI arrived in Lebanon Sept. 14, saying that he came “as a pilgrim of peace, as a friend of God and as a friend of men.”

In his remarks at a welcoming ceremony at Beirut’s airport, Pope Benedict praised Lebanon, with a mixed population of Christians and Muslims, for its distinctive record of “coexistence and respectful dialogue.”

But speaking in a country that was devastated by a civil war from 1975 to 1990, the pope acknowledged that Lebanese society’s “equilibrium, which is presented everywhere as an example, is extremely delicate.”

“Sometimes it seems about to snap like a bow which is overstretched or submitted to pressures,” he said.

The pope said Lebanon’s social equilibrium “should be sought with insistence, preserved at all costs and consolidated with determination.”

Earlier in the day, speaking to reporters on the plane from Rome, Pope Benedict addressed some of the turbulence currently affecting the rest of the Middle East. He praised the so-called Arab Spring, a revolutionary wave that started in December 2010, leading to the fall of dictatorships in Tunisia, Egypt, Libya and Yemen, and currently threatening the government of Syria, just across the border from Lebanon.

The pope said the movement represented positive aspirations for democracy and liberty and hence a “renewed Arab identity.” But he warned against the danger of forgetting that “human liberty is always a shared reality,” and consequently failing to protect the rights of Christian minorities in Muslim countries.

Many Middle Eastern Christians fear that revolution has empowered Islamist extremism in the region, increasing the danger of attacks and persecution of the sort that Iraq’s Christians have suffered since the fall of Iraqi leader Saddam Hussein.

Pope Benedict’s primary reason for visiting Lebanon is to deliver his document of reflections on the 2010 special Synod of Bishops, which was dedicated to Christians in the Middle East. 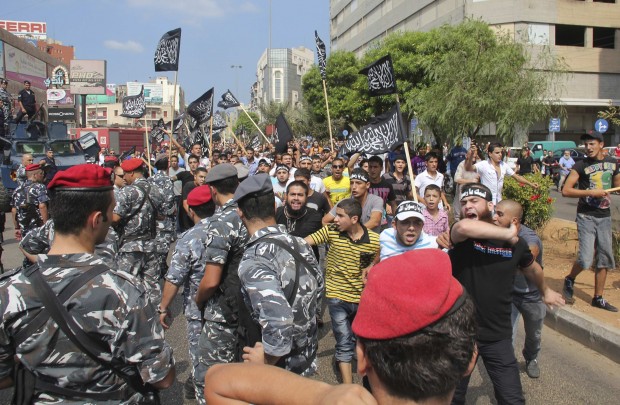 Protesters in Tripoli, Lebanon, carrying flags that read "There is no God but Allah, Mohammed is Allah's messenger," clash with the police during a Sept. 14 protest against a U.S.-made film. Witnesses said hundreds of protesters reportedly burned two U.S. fast food stores, chanting against the Pope Benedict XVI's visit to Lebanon and shouting anti-U.S. slogans. (CNS photo/Reuters)

Asked about the current exodus of Christians from civil-war-torn Syria, the pope noted that Muslims, too, have been fleeing the violence there. He went on to say that the best way to preserve the Christian presence in Syria was to promote peace, among other ways by restricting sales of military arms.

Speaking only three days after the killing of the U.S. ambassador to Libya and three of his staff members, the pope told reporters that he had never considered canceling his visit to Lebanon out of security concerns, and that no one had advised him to do so.

The pope arrived at the Beirut airport, which was closed to all other air traffic for reasons of security, at shortly before 2 p.m. He was welcomed by Lebanon President Michel Suleiman, a Maronite Catholic, who hailed the pope for bringing the “peace of God in whom all the people of this region believe.”

A chorus of teenagers at the airport serenaded the pope with hymns and chanted his name. Some held a sign written in English: “Have no fear, the pope is here.” Outside the airport, a group of Muslim women and girls, entirely covered except for their eyes, also waited to welcome the pope.

After the speeches, Pope Benedict was greeted by Lebanese government leaders and dozens of local religious leaders from the country’s various Catholic, Orthodox and Muslim communities. Although he stood while giving his speech and greeting the dignitaries, he walked slowly with a cane as he left the airport.

The pope traveled 16 miles from Beirut to Harissa, and all entrances of Lebanon’s coastal highway were closed off ahead of time as part of the stringent security measures. Just south of Harissa, traffic came to a standstill alongside the highway.

Frustrated drivers responded to the tie-up as they typically do in Lebanon, with a chorus of car horns. Realizing they would be stuck for a long time, many drivers turned off their cars and mingled with other stranded motorists. One offered a bottle of water to the soldier guarding the road.

More than an hour later, a lone helicopter appeared, a signal to motorists and shopkeepers that the pope’s motorcade would soon be approaching. Crowds of people then lined the highway, cheering as the motorcade passed.

A Filipina worker looked at her mobile phone and raised her hand in victory that she had captured a photo of the pope.

When the barricades to the coastal highway entrances were removed, motorists raced to get ahead on the highway, but soon encountered traffic jams.

NEXT: Encounter with God only answer to suffering and evil, says ethicist