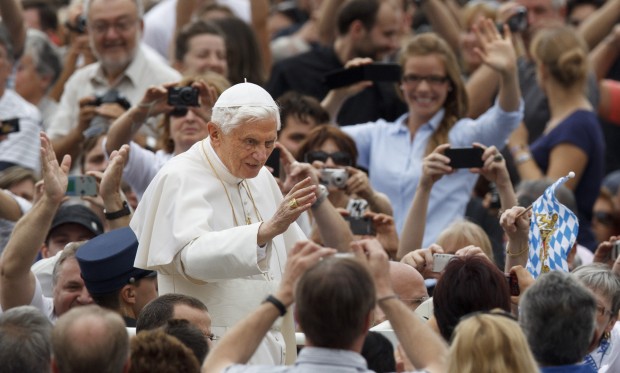 VATICAN CITY (CNS) — In everyday life, people are told that it’s best to think before they speak, but in worship, speaking God’s word should come before reflection, said Pope Benedict XVI.

“The first requirement for a good liturgical celebration is that there be prayer and a conversation with God, first and foremost listening and then response,” he said.

The pope spoke Sept. 26 to an estimated 10,000 people gathered for his weekly public audience in St. Peter’s Square. The talk was the latest in his series on the subject of prayer, focusing this week on the liturgy.

Because Christ is always present in his church, the pope said, quoting Blessed John Paul II, “the liturgy is the privileged place for the encounter of Christians with God and the one whom he has sent, Jesus Christ.”

“The liturgy reminds us of the primacy of God,” he said, so a fundamental feature must be “its orientation toward the father, whose saving love culminates in the death and resurrection of his son.”

The people of God must direct their hearts and minds the same way, participating with a prayerful, reflective attitude so as to hear God’s word and conform their lives more closely to Christ, he said.

Every sacramental celebration represents God’s children coming together with their father in Christ and the Holy Spirit in a meeting of dialogue “through actions and words,” Pope Benedict said.

Citing the Second Vatican Council’s Constitution on the Sacred Liturgy, the pope said the faithful should approach the sacred liturgy with minds “attuned to their voices,” and should “cooperate with divine grace lest they receive it in vain.”

The best way to get heart, mind, soul and behavior all in harmony with God’s word, the pope said, is for the faithful to “lift up your hearts” and untangle themselves from “our worries, our wishes, our anxieties, our distractions.”

One’s heart should gently open itself up to God during prayer in order to receive guidance toward God through the words one hears and says.

When one’s heart is “directed toward God,” the pope said, it’s as though it has been freed from the force of gravity, letting it soar upwards “toward the truth and love, toward God.”

The text of the pope’s audience remarks in Spanish will be posted online at www.vatican.va/holy_father/benedict_xvi/audiences/2012/documents/hf_ben-xvi_aud_20120926_sp.html.