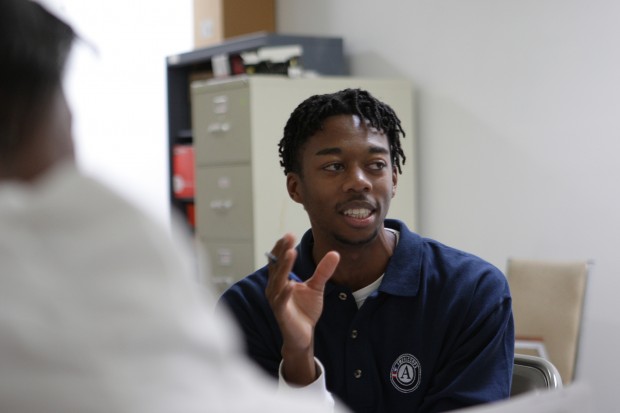 BALTIMORE (CNS) — When Towana Bowers-Scott looks at Anthony Newman, she doesn't see a youthful do-gooder spending his second post-college year doing a year of service for a Catholic organization.

“He don't give up on us,” Bowers-Scott said, following a tutoring session with Newman at the McElderry Park Community Resource Center in an east Baltimore neighborhood littered with boarded-up houses and all of the markings of extreme poverty.

Nearly 400 other young adults recently began a year of service with Notre Dame Mission Volunteers through an AmeriCorps program to serve impoverished communities throughout the U.S. and abroad.

During a September orientation for several new mission workers at the Baltimore province center of the Sisters of Notre Dame de Namur, the magnitude of their undertaking was laid out for them.

Leaders of the Notre Dame Mission Volunteers-AmeriCorps Program told the incoming mission workers they are foot soldiers on the ground empowering the poor and “helping people help themselves.”

“Teach them what they need to know for life,” Notre Dame Sister Katherine Corr told the young mission workers as they prepared to begin their year of service. “You know, they've got to know their arithmetic. But, they also have got to know they are important. They're special. They need to count on us for caring about them.” 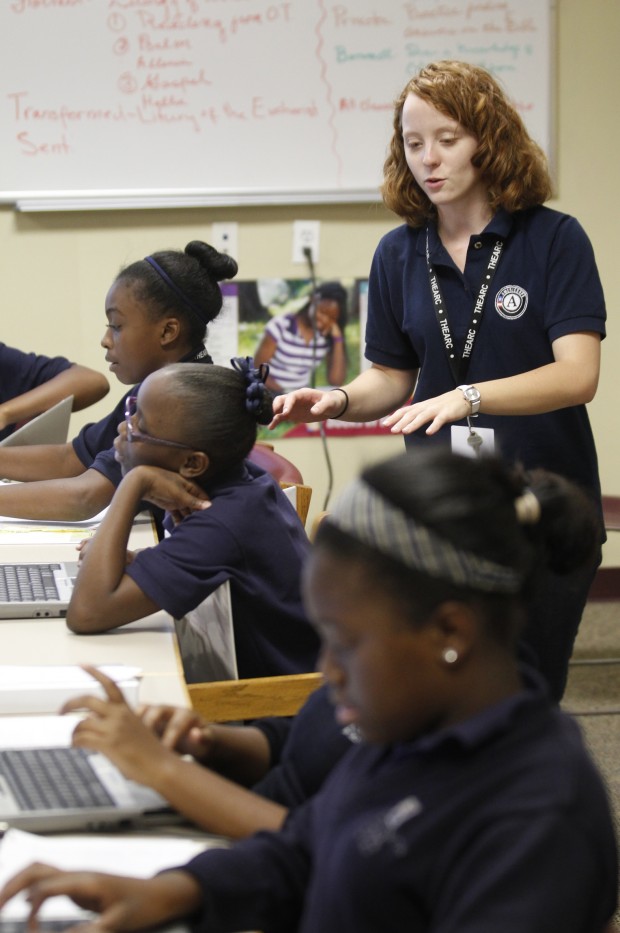 Kaitlin Walker instructs students during a writers workshop at the Washington Middle School for Girls in Washington Sept. 19. Walker, 22, is beginning her first year of service for Notre Dame Mission Volunteers-AmeriCorps, a Catholic organization that serves impoverished communities throughout the U.S. and abroad. (CNS photo/Bob Roller)

Kaitlin Walker, 22, of Birmingham, Ala., has taken Sister Katherine's words about caring very seriously, as she began her year of service through the program at the Washington Middle School for Girls, a Catholic school in the nation's capital for underprivileged girls.

“My biggest goal for the year and the biggest impact I'd hope to make is to build really good relationships with the students here,” said Walker, as she awaited the arrival of her afternoon study group. “I think that is the best way to get children interested in learning, is to really be interested in them learning.”

The petite redhead, who graduated from Davidson College in Davidson, N.C., last May, not only looks very different from her students — she is white and the adolescents she mentors are predominantly black — her middle-class socioeconomic background also sets her apart from those she helps at the school.

But Walker said she is comfortable with people from all ethnic groups and socioeconomic backgrounds. She was introduced to community service as a child, having grown up in a family that considers volunteer work a household obligation.

“My mom was (an AmeriCorps) Vista in the 1980s, so she kind of gave me the idea,” she told Catholic News Service. “I never really thought of any other options. I was always going to do an AmeriCorps year. It was just (a question of) where was I going to do it and with what organization.”

The mission workers are engaged in a variety of programs that provide one-on-one and small group instruction in and outside of classrooms to school-aged children and adults.

Some of them are teaching in after-school enrichment programs for underprivileged students, leading mentor programs for children with incarcerated parents, instructing English as a second language classes, as well as job readiness courses.

Most of the young people who participate in the Notre Dame Mission Volunteers-AmeriCorps Program are new college graduates, who want to spend a year helping underserved communities, much like the Peace Corps, said Sister Katherine, affectionately called “Sissy” by the mission workers. She is also the program's director.

Mission workers who have given the18-year-old program a year of service in the past have said the experience encouraged them to continue serving their communities when they returned to “civilian life,” she told the new recruits during that September orientation.

Newman was so inspired by his first year of service that he decided he wanted to enlist for a second year.

“For as far as my program came, I saw the potential for it to go further, which is why I decided to sign on for a second year,” the 23-year-old from Charlestown, W.Va., said of the GED tutoring program he runs. “I really feel like it's my baby, so I wanted to set it up well enough so that someone else can pick it up when I'm gone and keep it going even stronger.”

Newman didn't have a lot of service experience growing up and said his time as a mission volunteer has changed his outlook about his role in society. “I think I'll always be involved with helping people wherever I live in the future.”

NEXT: Cardinal Rigali had back stage pass to Vatican II’s proceedings