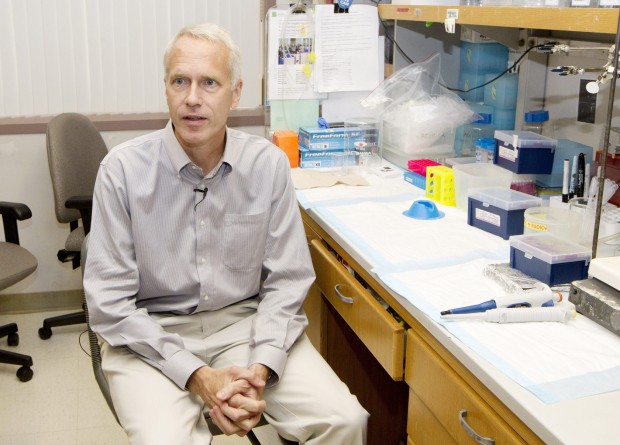 ST. CLOUD, Minn. (CNS) — Who could have predicted that a student from St. Mary’s Grade School in Little Falls would one day win a Nobel Prize? But that’s what Dr. Brian Kobilka accomplished.

He’s one of two scientists awarded a Nobel Prize in Chemistry Oct. 10 for their work on cell receptors.

“It’s a great honor for me,” Kobilka told The Visitor, newspaper of the Diocese of St. Cloud. He made the comments in a telephone interview from his lab in the department of molecular and cellular physiology and medicine at Stanford University in Stanford, Calif.

Kobilka, 57, physician and professor at Stanford University School of Medicine, shares the prize with his onetime mentor Robert Lefkowitz, professor at Duke University Medical Center in Durham, N.C. Since 1984, the pair has worked to identify and isolate a particular family of cell receptors, called G-protein-coupled receptors, or GPCRs, which carry signals from outside stimuli to cells of the human body.

The Royal Swedish Academy of Sciences website includes an essay on the winners’ work, “Cells and sensibility,” as general background for the science.

In their introduction: “In our eyes, noses and mouths, we have sensors for light, odors and flavors. Within the body, cells have similar sensors for hormones and signaling substances, such as adrenalin, serotonin, histamine and dopamine. As life evolved, cells have repeatedly used the same basic mechanism for reading their environment: G-protein-coupled receptors. But they remained hidden from researchers for a long time.”

Their essay further described the two scientists’ persistence in trying to capture an image of the receptor, a goal believed unattainable by most of the scientific community, and their groundbreaking discoveries in mapping how the GPCR family of receptors works.

Though often Nobel Prizes are given for work done much earlier, Kobilka said in his case the work that had the greatest impact was published only last year in Nature, an international journal for science and medicine.

In 2011, Kobilka’s lab captured through X-ray crystallography the first image of a living G-protein receptor on a cell membrane precisely when it transferred the signal from the hormone adrenalin on the outside of the cell to its interior. The image revealed new details about the GPCRs.

Because of the insights of Lefkowitz and Kobilka, pharmaceutical companies are able to develop more effective and safer medicines for a wide range of diseases.

“About half the drugs a physician would administer,” Kobilka said, “particularly to patients in an intensive care setting, work on cell receptors.”

Those drugs include beta blockers for heart disease, antihistamines for inflammatory disease, various psychiatric medications, drugs for ulcers and those which help the immune system combat cancers.

Kobilka talked about growing up in Minnesota, recalling: “The entire time I lived in Little Falls I attended Mass at St. Mary’s. Msgr. (T. Leo) Keaveny was our priest.”

Currently, Kobilka and his wife, Tong Sun Kobilka, are members of the Catholic Community at Stanford, which is in the Diocese of San Jose, Calif.

“My introduction to science came through a friend several years older who was interested in all things science you can do at a young age,” he told The Visitor. “He did experiments in electronics and had a chemistry set, which he shared with me. I caught my interest from him.”

Kobilka further credits excellent math and science teachers at Little Falls High School, where he graduated in 1973, and at University of Minnesota-Duluth, who helped him pursue his zeal.

“Work on what you’re interested in,” he said, “on what you want to understand, like how some aspect of how life works. It could be humans or how the universe was created, physics, planetary science, light, the complex relationships between matter and space, medicine, chemistry. If you try to do something because someone wants you to, you’re less likely to succeed.

“What drives people to succeed is doing something that follows their natural instincts and curiosity.”

Rajala is on the staff of The Visitor, newspaper of the Diocese of St. Cloud.

NEXT: Essayists say church teachings have given them ‘true freedom’ as women