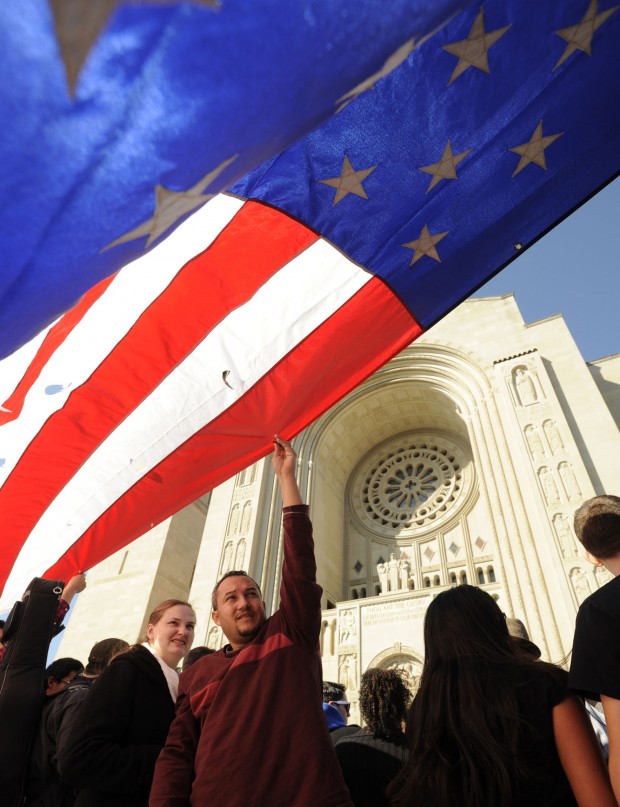 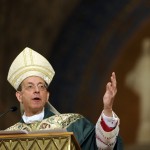 Archbishop William E. Lori of Baltimore delivers the homily during an Oct. 14 Mass and Pilgrimage for Life and Liberty at the Basilica of the National Shrine of the Immaculate Conception in Washington. (CNS photo/Leslie E. Kossoff)

WASHINGTON (CNS) — At what is a critical time for American Catholics to stand up in defense of life and religious freedom, they must engage in the church’s new evangelization effort, deepening their faith and sharing it in their everyday lives and in the public square, Baltimore Archbishop William E. Lori said Oct. 14.

He made the comments in the homily at a Mass and Pilgrimage for Life and Liberty at the Basilica of the National Shrine of the Immaculate Conception in Washington.

“If we want to turn back the powerful incursions of secularism against the dignity of human life and the freedom to practice our faith, then we must heed the call of Pope Benedict XVI to engage in the new evangelization, to stand with Christ, to know our faith, to love our faith, (and) to share our faith,” he said.

Archbishop Lori, chairman of the U.S. bishops’ Ad Hoc Committee for Religious Liberty, was the main celebrant at the Mass, which drew a standing room crowd of an estimated 5,500 to 6,000 people. Archbishop Carlo Maria Vigano, apostolic nuncio to the United States, was in attendance.

The Mass and pilgrimage are part of the U.S. bishops’ annual Respect Life prayer campaign; each year October is designated as Respect Life Month by the U.S. Catholic Church. The liturgy concluded with eucharistic adoration and the launch of an Oct. 14-22 Rosary Novena for Life and Liberty.

The overflow crowd filling the national shrine included families with babies in strollers, and senior citizens and people with disabilities in wheelchairs. People came from not only the Washington area but many other states as well.

The opening procession included a Knights of Columbus color guard of 120 men wearing white, gold, green, purple and blue plumed hats. During the eucharistic adoration and rosary novena, the diverse congregation crowding the pews and aisles knelt and prayed together for life and liberty.

As Mass opened, Archbishop Lori thanked people for coming from near and far “as a family of faith united in our defense of life and liberty.”

In his homily, the archbishop warned that “for some time now, both life and liberty have been under assault … (by) a secularism that relentlessly seeks to marginalize the place of faith in our society.” He also noted, “When man and woman are no longer perceived to be created in the image of God, then, sooner or later, their lives and their liberties become dispensable.”

Archbishop Lori pointed out how, in the nearly 40 years since the U.S. Supreme Court legalized abortion on demand in its Roe v. Wade decision, more than 50 million unborn children have lost their lives through abortion. 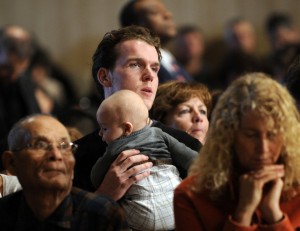 A man holds a child during an Oct. 14 Mass and Pilgrimage for Life and Liberty at the Basilica of the National Shrine of the Immaculate Conception in Washington. (CNS photo/Leslie E. Kossoff)

The secularist assault on life, he said, can also be seen in efforts in the United States to legalize assisted suicide and to redefine marriage.

Archbishop Lori emphasized the key threat to life and liberty posed by the U.S. Department of Health and Human Services’ mandate requiring “most religious and private employers to fund and facilitate abortion-inducing drugs, sterilizations and contraception against their convictions if they engage in hiring or offer services deemed by the government to be ‘secular.'”

A narrow religious exemption applies only to those religious employers who seek to inculcate their religion and who primarily employ and serve people of their own faith.

The mandate is currently being challenged in courts around the country by Catholic dioceses and agencies and other religious individuals and groups.

In his homily, Archbishop Lori pointed out the irony in those advocating “freedom of choice” are trying to force people of faith to violate their religions’ teachings. “Our ‘right to choose’ — our right to choose to practice the faith we profess, a right guaranteed by the First Amendment — seems to mean little or nothing to many who wield power.”

The archbishop noted that many secular threats to religious liberty “seem to hinge on the church’s teaching with regard to the sanctity of life — whether it’s the church’s teaching on the immorality of abortion, or the obligation of couples to be open to the God-given gift of human life, or marriage as between one man and one woman.”

Archbishop Lori said the link between the God-given gifts of life and liberty was noted by Thomas Jefferson, who once said: “The God who gave us life, gave us liberty at the same time; the hand of force may destroy but cannot disjoin them.”

As the Year of Faith opens and as the country approaches a time of decision with its elections, Archbishop Lori called it a critical time for Catholics to engage in Pope Benedict’s call to the new evangelization.

“With Mary’s prayers, we seek to have the fire of our faith rekindled — our faith in the person of Christ, our faith in all the church believes and teaches, our confidence in the church’s teachings, and our courage in sharing those teachings, not just with family and friends, but in the public square, with our elected leaders, our appointed leaders and with those who influence public opinion.”

He said it is wrong for Catholics to compartmentalize their faith, and as an example, he criticized Catholic elected officials “who say they are personally opposed to intrinsic evils like abortion, while doing everything in their power to promote them.”

Archbishop Lori urged Catholics to take their faith to the public square and to the voting booth.

“As believers and as citizens, we must robustly engage in the political process by voting with a properly formed conscience and by continually letting our elected officials know that we expect them to protect the God-given rights of life and liberty,” he said. 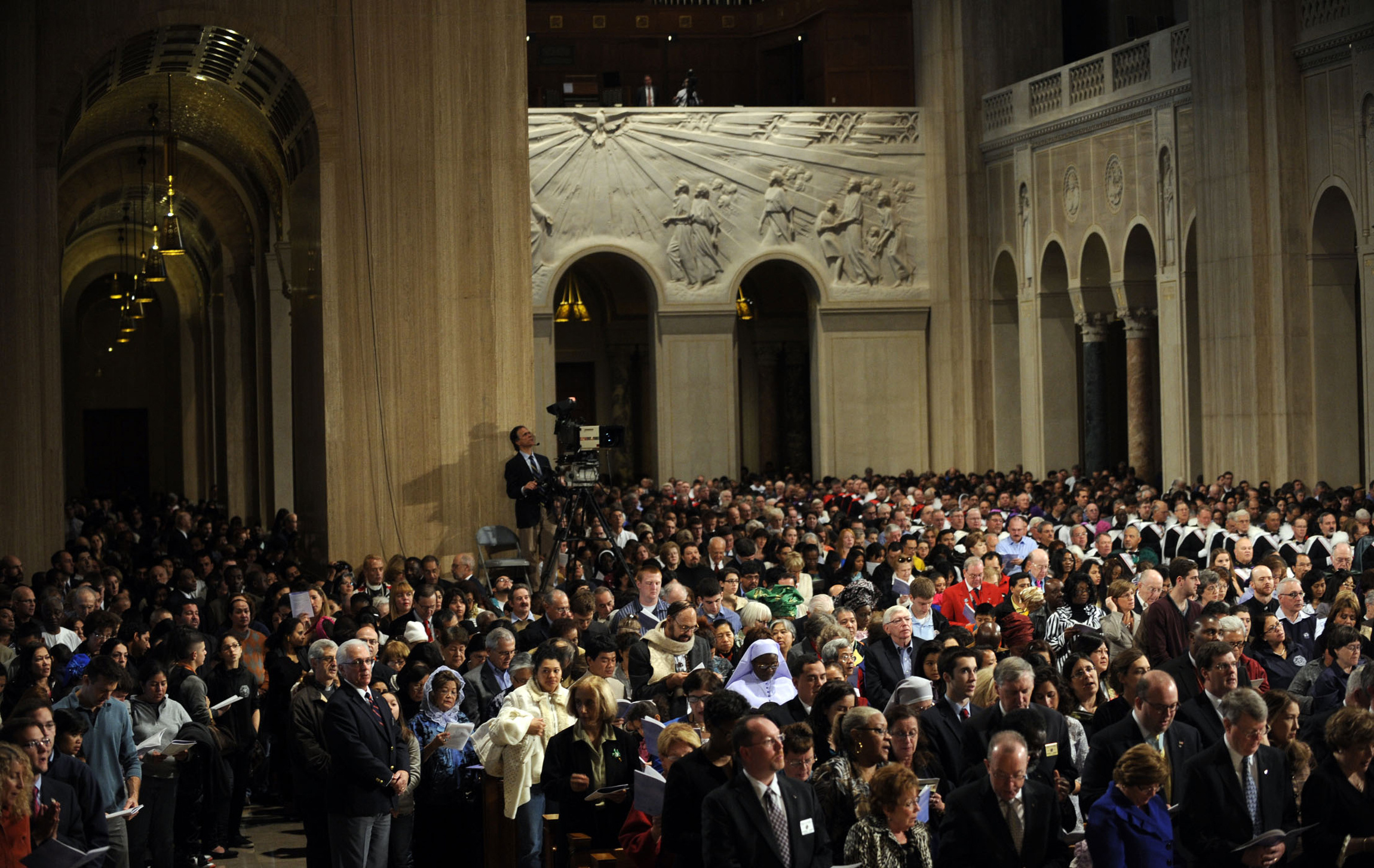 A standing-room-only congregation estimated at nearly 6,000 people prays during an Oct. 14 Mass and Pilgrimage for Life and Liberty at the Basilica of the National Shrine of the Immaculate Conception in Washington. (CNS photo/Leslie E. Kossoff)