Hurricane Sandy a storm ‘many have feared for a long time,’ says N.J. Catholic official 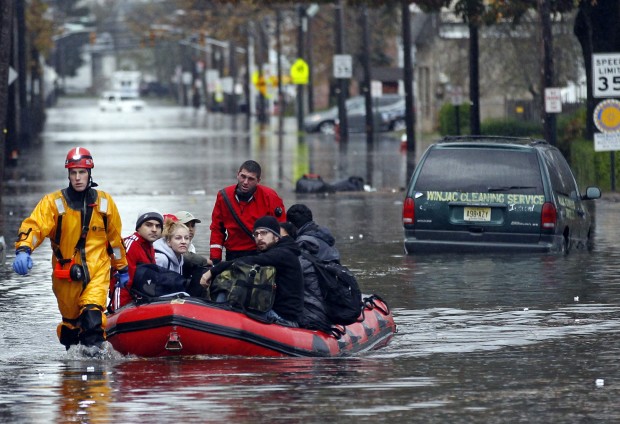 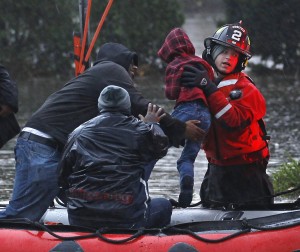 WASHINGTON (CNS) — Hurricane Sandy “is a storm that people in southern New Jersey have feared for a long time because of its direct impact on the coast,” an area with that is highly developed and also has a significant rate of poverty, said an official of Catholic Charities for the Diocese of Camden, N.J.

“Ocean City, N.J., which is in Cape May County, that was completely covered with water … and that’s a fairly large area,” Kevin Hickey, executive director of Catholic Charities, told Catholic News Service Oct. 30. He said Wildwood, N.J., was similarly underwater and flooding would be a severe problem anywhere where rivers met bays or estuaries.

Access had been barred to the barrier islands — which include Atlantic City — because state and local police and fire officials were assessing the extent of power outages and flooding.

Hickey said teams had been set up to establish relief services, and that two parishes had been identified by midday Oct. 30 as relief distribution sites.

Camden was one of many dioceses along the East Coast that followed the lead of federal, state and local governments in shutting operations as Hurricane Sandy made landfall Oct. 29 in New Jersey with stiff winds, huge rainfalls, power outages and severe flooding.

Catholic Charities USA was working with its local affiliates along the East Coast to get them necessary supplies and services once the storm passed.

“Reports from the National Weather Service make it clear that many of our agencies on the East Coast — from New York all the way down to Florida — will be feeling some impact from Hurricane Sandy and we stand ready to provide whatever support necessary to meet the needs of those affected,” said an Oct. 29 statement from Samuel Chambers, Catholic Charities USA senior vice president of disaster operations.

“Since Hurricane Katrina, we have focused on being prepared for future disasters,” said an Oct. 29 statement from Catholic Charities USA president Father Larry Snyder, “Not only are we early responders, but our presence in the community also puts us in a position to be able to quickly assess and provide support in the long term.”

Dioceses heeded the advice of governors and big-city mayors, who had declared a state of emergency in their respective jurisdictions, and shut down for at least one day with the possibility of extending their shutdown longer. The Camden Diocese was closed Oct. 29 and 30.

The Archdiocese of New York closed Oct. 29 “due to the decision by the MTA to suspend public transportation as a result of Hurricane Sandy,” said a statement on the archdiocesan website. The MTA is the Metropolitan Transit Authority; New York’s subway system shut down Oct. 28, and public transportation remained shuttered Oct. 30. As for the possibility of continued closing, the statement added, “we will be guided by the decisions of the governor, mayor and MTA.”

A Catholic Charities USA report on conditions in the Diocese of Rockville Centre, N.Y., said many mobile phone towers went down in the high winds. Catholic Charities staff opened one shelter at a high school for 100 special-needs occupants.

The Archdiocese of Newark, N.J., had already decided by late morning Oct. 29 to be closed Oct. 30 as well, according to Jim Goodness, the director of communications for the archdiocese. A decision was pending about whether to remain closed Oct. 31.

“All of the schools of the archdiocese have been following the leads of the state,” Goodness said. “Parishes can certainly handle themselves.”

Still, “we’d certainly worry. We had several parishes that went underwater last year” from the rains of Hurricane Irene after it had been downgraded to a tropical storm, Goodness said. “Working with our property management people to mitigate (bad effects), however, they can hope that things can work out better this time than they did last time.”

Not knowing the condition of individual parishes or schools, Goodness said, “there are a lot of people without light in New Jersey. There are hundreds of thousands without light or heat.”

Diocesan representatives across the Garden State said it would be hard to assess any negative impact of Sandy until after the storm.

Initial, unconfirmed reports from the Diocese of Trenton, N.J., said parishes along the Atlantic coast suffered interior damage from Sandy. The diocese was closed Oct. 29-30. A posting on the diocesan website’s homepage Oct. 30 said Bishop David M. O’Connell asked Catholics of the diocese to “join him in praying for those in the Caribbean who lost loved ones, and whose lives have been devastated in the storm’s wake.”

The Diocese of Paterson, N.J., also was closed Oct. 29-30. Accompanying the Oct. 29 announcement on the diocesan website was a map showing Sandy’s path. New Jersey was the only state entirely covered, while other states had at least parts not directly hit.

In an Oct. 29 statement, Archbishop Charles J. Chaput of Philadelphia thanked Philadelphia Mayor Michael Nutter, Pennsylvania Gov. Tom Corbett “and other governors and mayors of the tri-state area (who) have so far responded quickly and vigorously in serving their people where it matters most — at the local and state levels, where the ‘common good’ has flesh and blood meaning.”

Government officials and the region’s emergency responders “have the gratitude of the whole Catholic community,” said Archbishop Chaput, adding Catholic Human Services of the Archdiocese of Philadelphia and its programs remained working through Sandy, dubbed later as a “post-tropical storm.”

“Our service centers are available for shelter should community members need them,” Archbishop Chaput said. “While we do not have active disaster relief in place during the storm, we will cooperate fully with the Red Cross and government agencies to provide food, alternate shelter and financial relief as needed after the storm.”

At an Oct. 29 Mass for the safety of those in the Baltimore Archdiocese, especially those who are homeless, sick or vulnerable, Archbishop William E. Lori said: “I am very much praying through these hours for them, and I know I’m joined in that by my brother priests, and I talked to a lot of people yesterday, and I know they’re doing the same.”

Nearly 1,000 miles wide, Sandy’s grasp reached to the Great Lakes, where gale warnings were in effect Oct. 29. It caused at least 16 deaths in seven states and left more than 7.4 million homes and businesses without power from the Carolinas to Ohio.

In the Caribbean government officials put the death toll across the islands at 65, with more than 50 in Haiti, where widespread flooding devastated parts of the already impoverished country.

The Archdiocese of Detroit said it would collect funds to help East Coast victims of Sandy. Funds sent to both the archdiocese and any parishes conducting special collections for disaster relief would be forwarded to Catholic Charities.

The Archdiocese of Washington follows the closure policies of the federal government. With the federal government closing Oct. 29-30, the archdiocesan offices stayed closed as well. The Catholic University of America and the U.S. Conference of Catholic Bishops’ headquarters building were also closed for the two days.

A Mass for victims of Sandy was to be celebrated at 4 p.m. Oct. 30 at Catholic University.

The U.S. Supreme Court was a rare holdout among federal entities Oct. 29, going about business as usual, but oral arguments scheduled for Oct. 30 day were postponed, probably until Nov. 1.

For the Oct. 29 session, as the court heard arguments in cases about national security and international resale of products, the courtroom was packed. And the bench was full, with not just the nine sitting justices on hand, but two extras: retired Justice Sandra Day O’Connor and Japan’s Chief Justice Hironobu Takesaki, both just visiting.

Contributing to this story was Patricia Zapor. 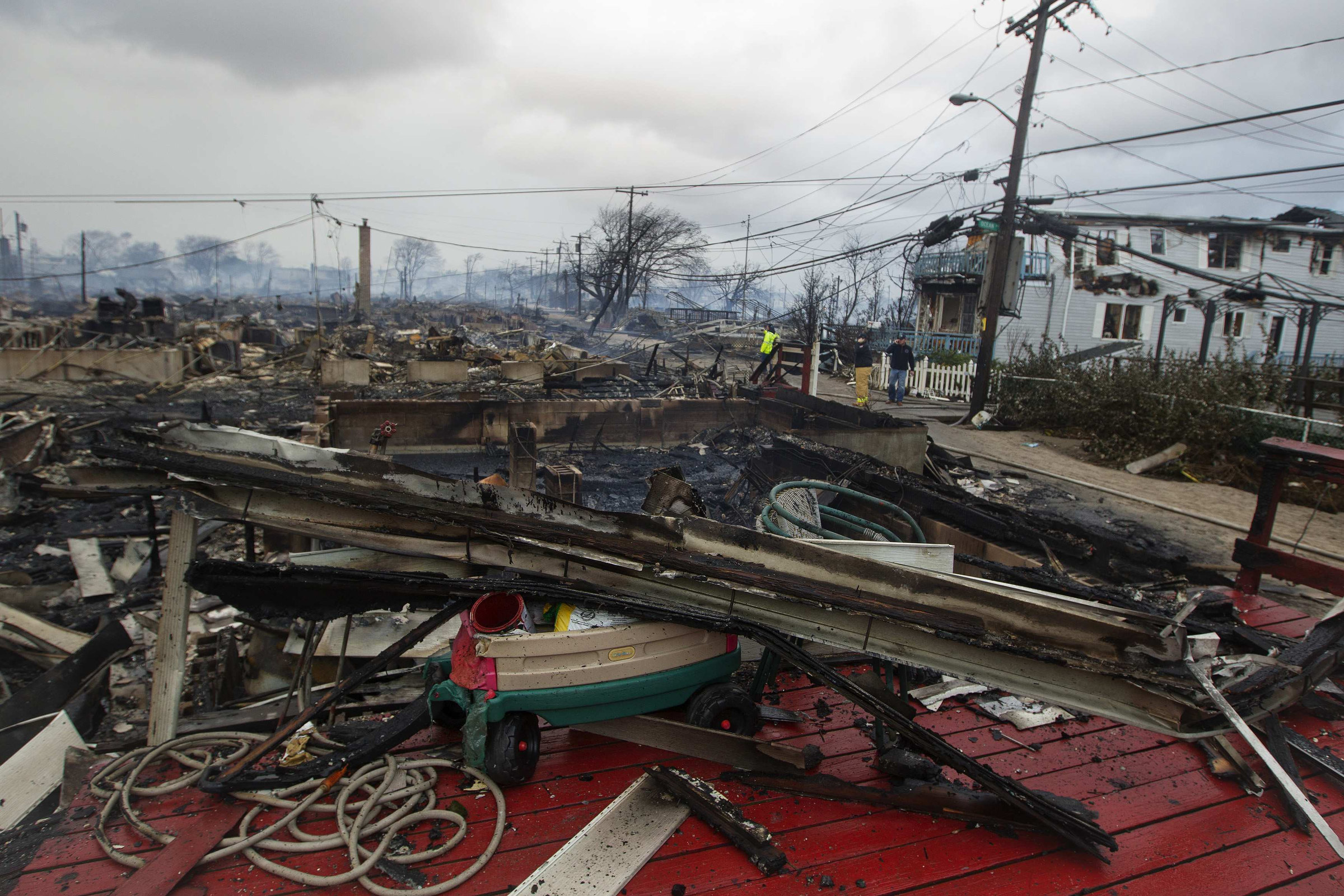 Homes devastated by fire and the effects of Hurricane Sandy are seen in the Breezy Point section of Queens borough in New York Oct. 30. The storm knocked out power to huge swathes of the nation’s most densely populated region, swamped New York’s subway system and submerged streets in Manhattan’s financial district. (CNS photo/Shannon Stapleton, Reuters)