Conference to explore life, death of Pope John Paul I 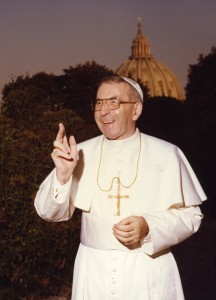 Pope John Paul I, known as the smiling pope, is pictured at the Vatican in 1978. He served one of the shortest papacies -- 34 days. Born Albino Luciani, he was the cardinal of Venice, Italy, when he was elected pope Aug. 26, 1978. He died Sept. 28. (CNS file photo/L'Osservatore Romano)

DOUGLASTON, N.Y. (CNS) — Experts from Europe and the United States will speak at an international conference focusing on the life of Pope John Paul I and his brief pontificate Oct. 12-13 at the Immaculate Conception Center in Douglaston.

Speakers at the conference on “The True Pope John Paul I: A Man of Faith for Our Time” will include the pope's niece, Pia Luciani; Italian journalist Stefania Falasca, one of the prime movers in his sainthood cause; and Paul Spackman of Corwen, Wales, author of “God's Candidate: The Life and Times of Pope John Paul I.”

Lori Pieper, a secular Franciscan who has translated some of Pope John Paul I's pre-papal writings for an upcoming book, “A Passionate Adventure: Living the Catholic Faith Today,” said the conference was organized to refute conspiracy theories about the pope's death raised in books like David Yallop's 1984 “In God's Name” and John Cornwell's 1989 “A Thief in the Night.”

“The purpose of the conference is to take John Paul I back from all the Yallops and Cornwells, and to establish an accurate portrait of him based on sound historical research,” Pieper said. “People don't know that as a bishop he was a great supporter of Vatican II and anticipated the new evangelization in many ways.”

Pieper, Luciani and Father Joseph Curran of Watertown, Mass., who was at the Vatican after the pope's 1978 death, will speak Oct. 12 on the allegations about his death, providing information from his medical reports and eyewitness accounts.

The conference marks the centenary of the birth of the former Cardinal Albino Luciani, who served as pope for 34 days.

After the conference, Falasca and the postulator of Pope John Paul I's sainthood cause, Bishop Enrico Dal Covolo, will present information they have gathered about the pope to the Vatican to advance his cause.