Archbishop Ryan players take the field after half time. (Photos by Sarah Webb) 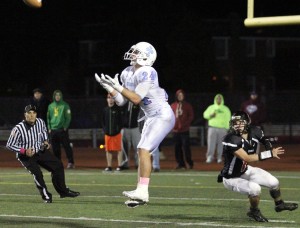 Brandon Spatz of Father Judge makes a catch after getting separation from Ryan defensive back Mark Ostaszewski. (Photos by Sarah Webb)

The Raiders won with a quarterback sneak for a touchdown by Mark Ostaszewski, and a two-point conversion by back Jeremiah Agrio.

Father Judge’s record stands at 2-4. On the same day they will host St. Joseph’s Prep (6-0) at Northeast High School in a Philadelphia Catholic AAA game. 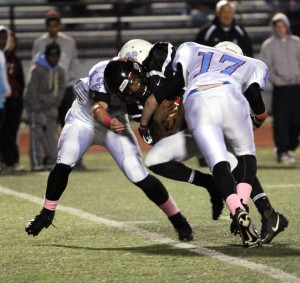 Ryan running back Jeremiah Agrio (center) broke a couple tackles before being taken down by Father Judge’s Sean Fitzgerald (right) and Dennis Boice. 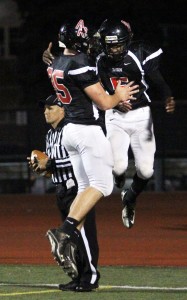 NEXT: All things considered, St. Hubert’s soccer loss not so bad