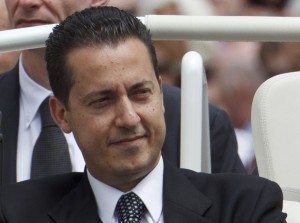 Papal butler Paolo Gabriele rides in the front seat of the popemobile May 23, the day he was arrested on suspicion of stealing and leaking Pope Benedict XVI's private documents to a journalist. During Oct. 2 testimony at his trial, Gabriele said he was innocent of charges of aggravated theft but feels he betrayed the pope. (CNS photo/Paul Haring)

VATICAN CITY (CNS) — Paolo Gabriele, the papal butler charged with stealing and leaking papal correspondence, said he was innocent of charges of aggravated theft, but “I feel guilty for having betrayed the trust the Holy Father placed in me.”

“I loved him like a son,” Gabriele said of the pope during the second day of his trial.

The morning session of the trial Oct. 2 also featured brief testimony by Cristina Cernetti, one of the consecrated laywomen who work in the papal apartment; and longer testimony by Msgr. Georg Ganswein, Pope Benedict XVI's personal secretary.

Msgr. Ganswein, who described himself as “extremely precise,” said he never noticed any documents missing, but when he examined what Vatican police had confiscated from Gabriele's Vatican apartment, he discovered both photocopies and originals of documents going back to 2006, when Gabriele began working in the papal apartment.

Taking the stand first, Gabriele said widespread concern about what was happening in the Vatican led him to collect photocopies of private papal correspondence and, eventually, to leak it to a journalist.

“I was looking for a person with whom I could vent about a situation that had become insupportable for many in the Vatican,” he testified Oct. 2.

Gabriele told the court that no one encouraged him to steal and leak the documents.

Although he said he acted on his own initiative, Gabriele told the court he did so after “sharing confidences” about the “general atmosphere” in the Vatican with four people in particular: retired Cardinal Paolo Sardi, a former official in the Vatican Secretariat of State; Cardinal Angelo Comastri, archpriest of St. Peter's Basilica; Ingrid Stampa, a longtime assistant to Pope Benedict XVI, going back to his time as Cardinal Joseph Ratzinger; and Bishop Francesco Cavina of Carpi, who worked in the secretariat of state until 2011.

Gabriele said that although he had set aside some documents previously, he began collecting them seriously in 2010 after Archbishop Carlo Maria Vigano, then secretary-general of Vatican City State, was reported to have run into resistance in his attempt to bring spending under control and bring transparency to the process of granting work contracts to outside companies. The archbishop is now nuncio, or ambassador, to the United States.

Asked to describe his role in the papal household, Gabriele said he served Pope Benedict his meals, informed the Vatican Secretariat of State of the gifts given to the pope, packed the pope's suitcases and accompanied him on trips, and did other “small tasks” assigned to him by Msgr. Ganswein.

“I was the layman closest to the Holy Father, there to respond to his immediate needs,” Gabriele said.

Being so close to the pope, Gabriele said he became aware of how “easy it is to manipulate the one who holds decision-making power in his hands.”

Gabriele had told investigators that he had acted out of concern for the pope, who he believed was not being fully informed about the corruption and careerism in the Vatican. Under questioning by his lawyer, he said he never showed any of the documents to the pope, but tried — conversationally — to bring some concerns to the pope's attention.

The Vatican prosecutor objected to any further questioning about Gabriele's motives, saying they “don't matter, we must discuss the facts.” The judges agreed and ordered the defendant's lawyer to move on.

Gabriele's lawyer also asked him several questions about the 60 days he spent in Vatican detention, including whether or not it was true that he first was held in a tiny room and that, for the first 15-20 days, the Vatican police left the lights on 24 hours a day. Gabriele said both were true.

Jesuit Father Federico Lombardi, Vatican spokesman, later told reporters that Judge Nicola Picardi, the Vatican prosecutor, had opened an investigation into the conditions under which Gabriele was detained.

Vatican investigators had said they found in Gabriele's Vatican apartment three items given to Pope Benedict as gifts: a check for 100,000 euros ($123,000); a nugget — presumably of gold — from the director of a gold mining company in Peru; and a 16th-century edition of a translation of the Aeneid.

Gabriele denied the nugget was ever in his apartment, and he said he had no idea how the check got there. As for the book, he said it was normal for him to take home books given to the pope to show his children.

“I didn't know its value,” and, in fact, he carried it around in a plastic bag, he said.

Msgr. Ganswein testified that he only began suspecting Gabriele in mid-May after a journalist published documents Msgr. Ganswein knew had never left the office he shared with Gabriele.

When Msgr. Ganswein entered the courtroom and when he left again, Gabriele stood. He did not do so for the other witnesses.

The trial formally opened Sept. 29 and Vatican judges decided to separate Gabriele's trial on charges of aggravated theft from the trial of Claudio Sciarpelletti, a computer expert in the Vatican Secretariat of State, charged with aiding and abetting Gabriele.

Gabriele was arrested in May after Vatican police found papal correspondence and other items in his Vatican apartment; many of the documents dealt with allegations of corruption, abuse of power and a lack of financial transparency at the Vatican.

The papal valet — who is 46, married and has three children — faces up to four years of jail time, which he would serve in an Italian prison.